Being with Julie Hastings (formerly)

Kill those who ruined his once promised life.

Robert Durant and his goons

Darkman is a superhero and master of disguise who is the titular main protagonist of the 1990 film of the same name, as well as it's sequels.

Dr. Peyton Westlake was a scientist working on creating a synthetic skin graft for burn victims, and skin cancer patients. Westlake had a run-in with crime lord, Robert G. Durant. Durant tried to have Westlake killed and ordered his men to blow up Westlake's lab.

Westlake survived, but most of his body and face were covered in severe burns. Luckily his unconscious body was found, where he underwent a strange new procedure at a hospital. Most of his sensory nerves were severed to avoid chronic pain from the burns. Also his body occasionally produces adrenaline at random times, due to the fact he has no danger input in his mind. Unfortunately there was a side effect to the treatment. His emotions now run wild, causing him to grow furious at simple things, or cry at the sight of a dead cat. This can be quite difficult for Dr. Westlake due to his present condition. Eventually Westlake was able to rebuild enough of his lab to start the synthetic skin once more. He began to study Durant, and his goons, and started formulating plans to gain his revenge. He began using the synthetic skin he developed to assume identities of Durant's gangsters. He perfected every last detail, even the voice of anyone he became.

Slowly Durant's empire crumbled beneath him, until he himself (presumably) died at the hands of Darkman.  Darkman soon after killed Durant's employer, Louis Strack, Jr., after the latter captured his friend Julie Hastings.  It was after this that Dr. Westlake made his full transition from a simple scientist to a near-insane anti-hero. Darkman has given up everything in his former life, and has come to terms with what he has become.

Darkman has been called the comic book character who did not first appear in a comic book, but rather a movie made by future Spiderman director Sam Raimi. He eventually was written into a comic book, first published by Marvel Comics in 1990 and 1993, and then by Dynamite Entertainment fourteen years later in 2007.

In the Darkman Movie Trilogy, he was played first by Liam Neeson (Batman Begins, Kingdom Of Heaven), and in the sequels by Arnold Vosloo (The Mummy, Blood Diamond). 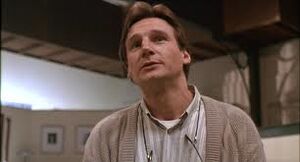 Peyton Westlake, before his disfigurement 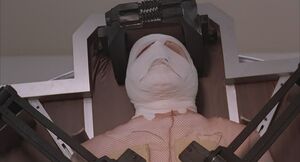 Darkman in the hospital, soon after the explosion that disfigured him 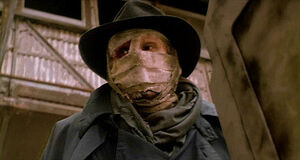 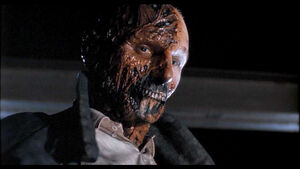 Darkman without his bandages and hat. 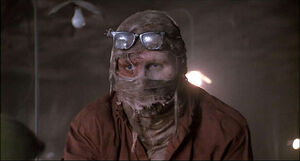 Add a photo to this gallery
Retrieved from "https://hero.fandom.com/wiki/Darkman?oldid=1612209"
Community content is available under CC-BY-SA unless otherwise noted.