Darkrai is a Dark-type Pokémon from Generation IV.

While it's abilities and looks make people think of it as evil, while in reality that's only some versions of Darkrai and others are heroes such as in the anime.

In Alamos Town a Darkrai lived there and fought against Dialga and Palkia who trapped the city in another dimension which had various side effects all of which Darkrai was blamed for even though it didn't have those kinds of abilities. It sacrificed itself to slow them down, but when everything was restored, it was brought back to life as well.

In Poképark 2: Wonders Beyond too, Darkrai is initially evil but realizing the harm caused and overcome by the consequences of his actions, he throws himself into the black hole to preserve the Poképark and the real world, but is later resurrected by the Pokétroupe. 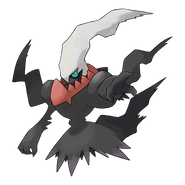 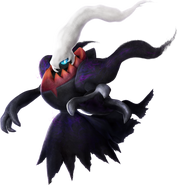 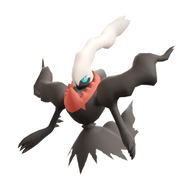 Darkra's Artwork from Super Smash Bros. Ultimate
Add a photo to this gallery

Retrieved from "https://hero.fandom.com/wiki/Darkrai?oldid=2220703"
Community content is available under CC-BY-SA unless otherwise noted.