Darkwing Duck is one of the supporting characters of DuckTales reboot series.

He was voiced by Chris Diamantopoulos, who also voices Mickey Mouse and Storkules.

He and Launchpad develop a strong friendship due to their shared love of the Darkwing Duck series.

In "The Duck Knight Returns!", Jim Starling was not happy with Drake taking his role as Darkwing,and tried to steal it from him. He tricked Launchpad into trapping Drake inside his trailer and hold him hostage. However the bonded over their love for Darkwing Duck. Launchpad releases Drake after he proves he's true fan and they both head out to find Jim.

Drake finds Jim and apologizes to him for taking his role, also expresses how much of an inspiration he has been to him. He suggest maybe they can work together on the movie, but the egotistical Jim disagrees and he throws him in with the guards.

When Starling unsuccessfully attempts to kill him and the production fails, Launchpad convinces him to become a real-life hero. 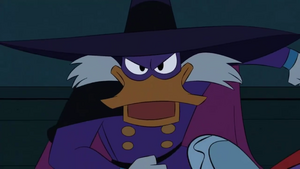 Darkwing Duck in the DuckTales 2017 episode Beware the B.U.D.D.Y. System!, played by Jim Starling aka NegaDuck 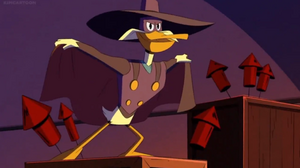 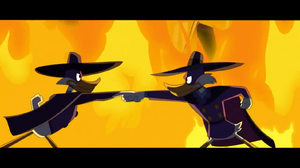 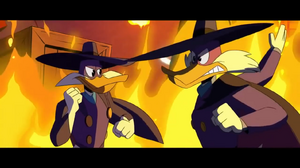 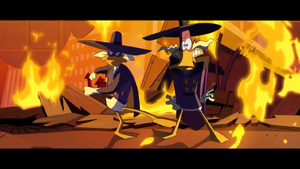 Retrieved from "https://hero.fandom.com/wiki/Darkwing_Duck_(DuckTales_2017)?oldid=1738335"
Community content is available under CC-BY-SA unless otherwise noted.