Save his tribe from extinction.

Darmani III is a character who appeared in the video game The Legend of Zelda: Majora's Mask and it's 3DS remake. He was a heroic Goron considered to be the greatest warrior of his tribe.

Darmani lived in the Snowhead Mountains along with the rest of his tribe and was renown amongst them for being a mighty hero, which also made him a potential candidate for the tribe's next patriarch. Darmani attempted to reach Snowhead Temple when it became evident that something there was causing a devastating winter that threatened his people. Unfortunately a strong blizzard blew Darmani off the path situated over a deep valley and he lost his life. He remained as a spirit wandering the Goron Graveyard while he suffered from regret until Kaepora Gaebora appeared to tell him about someone who can ease his suffering. He soon met Link at Goron Village and led the the boy to his grave where he expressed to be free from his regrets. Link played the Song of Healing to lift Darmani's burdens and transform him into a mask Link can wear to assume his form. Darmani then appeared before Link for a final time to inform him about the Goron's abilities. 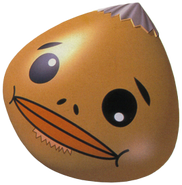 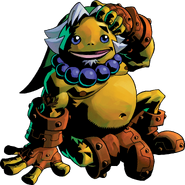