Leader of The Squeaks
Member of the Dream Friends

Defeat Kirby (formerly, failed).
Help Kirby to defeat Dark Nebula (succeeded).
Give Kirby tips and hints on how to get medals and defeat Necrodeus (succeeded).
Team up with Kirby to save the galaxy from the Jambastion Cult and Void Termina (succeeded).

Reformed Thief
Daroach is a former antagonist turned supporting character in the Kirby video-game series. He is the leader of the Squeak Squad.

He originally started as the main antagonist of his debut appearance Kirby: Squeak Squad, but later becomes an ally to Kirby in Kirby Mass Attack (as the tritagonist) and Star Allies (in the later as a playable character as a supporting protagonist).

He is a gray mouse, with large ears and a small black nose. His most characteristic feature is the fact that he has no limbs or tail, therefore, his feet and hands float at a certain distance from his body. Mainly, he always appears in a red wizard outfit and a scepter similar to the one Kirby wears having the Triple Star ability.

Like villains such as King Dedede, Daroach is shown to not necessarily be evil, but rather he is more of a mischievous thief. His goals involve stealing treasures, which would unintentionally bring him into conflict with Kirby.

In reality, Daroach is a good person in heart and knows when he's done wrong. He does the best he can to make up for his actions, as shown when he returned Kirby's cake to him as an apology for causing trouble.

In Kirby Mass Attack, more is revealed about Daroach's personality traits, in which he views the Squeak Squad as a family of his instead of just a gang of thieves, showing a protective and caring side of him. He is also said to have experience when it comes to romance.

Daroach appears as a sticker that give a boost on electric attacks power by 24 to any fighter.

Daroach appears as a ace primary attack spirit which only can be summoned by using cores of Count Cannoli, Mouser and two Neutral cores. At 99, the spirit can be enhanced to Dark Daroach, an legend spirit that increases the user's power on fire and explosion attacks. 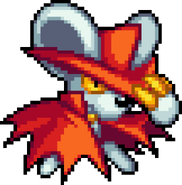 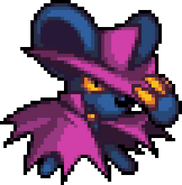