Heroes Wiki
Register
Don't have an account?
Sign In
Advertisement
in: Male, The Legend of Zelda Heroes, Gentle Giants,
and 25 more

Darunia (The Legend of Zelda)

Hero of the Gorons (Ancestor)

Darunia (ダルニア?) is a character from The Legend of Zelda: Ocarina of Time. He is the patriarch of the Goron tribe living in Goron City on Death Mountain. A tough ruler, he can often be perceived as rude; however, his responsibilities seem to be much of the cause of this. He is hesitant to accept outside help from Link, but later on accepts him as his "brother" and bequeaths unto him the Goron's Ruby.

Darunia is the chief of the Gorons on Death Mountain and bond brother to the king of Hyrule. Darunia is first encountered when Link travels to Death Mountain looking for the Goron's Ruby to access the Temple of Time's hidden chamber. Darunia is preoccupied with this people who are starving due to Ganondorf sealing Dodongo's cave where the Goron's food supply is located. Link is able to calm Darunia and cause a dancing fit by playing Saria's song for him. Link is then tasked with making Dodongo's cave safe for the Gorons in exchange for the Ruby. Once Link has done this and slayed King Dodongo Darunia presents the Ruby and his eternal gratitude. along with an unwelcome bear hug.

In the 7 year gap Darunia lead the Gorons through hard times during Ganondorf's rule. Ganondorf released Volvagia the dragon in order to keep the Goron's from being a threat. Darunia entered the Fire Temple to slay the dragon. He never got to however as the Hero of Time slayed Volvagia and revealed Darunia as the Sage of Fire. Darunia then took his place among the other sages and aided Link and Zelda in their final battle by sealing Ganondorf in the Sacred Realm. He was last seen with Saria on his shoulders watching events unfold. 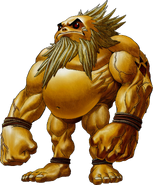 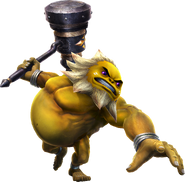 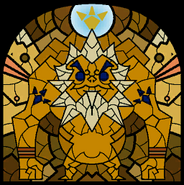