To protect his fellow survivors

Daryl Dixon is a the overall deuteragonist and a survivor of the zombie apocalypse in AMC's The Walking Dead, serving as one of the two tritagonists (alongside Michonne) of the show from Season 3 episode "Say the Word" to Season 8 episode "Honor", before he becomes the deuteragonist following Carl Grimes's death. After Rick Grimes's disappearance, Daryl becomes the main protagonist  of the series onwards. He is the younger brother to Merle Dixon and makes his debut appearance in "Tell It to the Frogs". Daryl is an expert at hunting, tracking, and navigating. Due to his survival skills, Rick values him as an important member of the group, becoming being his right-hand man. The two eventually form a brotherly bond. Following the deaths of Ed and Sophia Peletier, Daryl has developed a close bond with fellow survivor Carol Peletier. He later formed a brief bond with fellow survivor Beth Greene. His weapon of choice is the Crossbow. He is also the main (playable) protagonist in the AMC Video Game and prequel to the TV Series, The Walking Dead: Survival Instinct.

Daryl is a slim built Caucasian man with brown hair and commonly keeps facial hair on his lip and chin. His eyes are green.

Daryl is a both physically and emotionally strong man. He is often volatile, but he is still significantly more level-headed and rational than his older brother, Merle Dixon. Though he is usually distant, Daryl has often shown to be caring and selfless. All on his own, he risks his life in an attempt to find the lost Sophia Peletier on multiple occasions, one of which nearly cost him his life, and immediately takes initiative to go back to find Andrea when she gets separated from the group.

Daryl has also proven to be an incredibly honest individual and hardly ever lies, a characteristic he shares with his leader and close friend, Rick Grimes, thus making him a very respected and trusted right-hand man to Rick. He is much more clever than he looks, even more so than his erratic brother, Merle. Although he is not as tough as his brother, who is an experienced bruiser and has military experience, Daryl is just as aggressive and agile and can hold his own against the dead and the living.

In addition, Daryl has a keen sense of intuition, especially when it comes to meeting new people. Like his group mate Michonne, Daryl can tell almost immediately who can be trusted and who cannot. This is pointed out by Aaron in "Forget", when Aaron states that Daryl can tell the difference between "a good guy and a bad guy", something that Daryl's leader, Rick, is not much of an expert at. In many ways, Aaron's theory can be considered correct, given that despite Rick's long time distrusting Aaron, Aaron proves all along to have been telling the truth about the existence of a safe haven for Rick and his people, something that Michonne and Daryl were the first to believe was true. Due to having more fluidity than Rick, Daryl tries his best to be an adviser to the slightly mentally unstable Rick, with the help of Michonne, Glenn Rhee, Maggie Greene, and a few others.

On rare occasions, Daryl shows his very vulnerable side, particularly crying, when he loses someone very close to him. The best examples are when the only family member he has left, Merle, is killed, and Daryl himself is forced to put down zombified Merle. The other instance is when in "Still", an intoxicated Daryl cries and becomes emotionally distraught as he blames himself for the Governor's attack on the prison which resulted in the death of Hershel Greene. The other instance is when Beth Greene is killed; Daryl had grown close to Beth due to her sweet and innocent personality and her restoring his faith that there are still good people left in the harsh, new world. Finally, the other instance is when in "The Cell", Daryl cries after realising Glenn's death was his fault. Although he loses two of the closest people he has in his life, he tries his best not to believe that the world has gone into complete darkness, especially since he still has his other friends, including his close companions Rick, Carol Peletier, Michonne, and even Aaron.

Daryl's imprisonment and suffering at the hands of the Saviors, as well as the fact he's lost people to them, has caused him to become colder and more brutal than he once was. This is primarily shown by the fact he brutally beat Fat Joseph to death by bashing his head in with a metal pipe, even when Joseph was begging for his life, and how he's been entirely willing to kill the Saviors, as well as eager to kill Dwight. This change has been shown to worry some of the others, primarily Jesus.

An experienced tracker and hunter, he has deadly accuracy with his crossbow. Daryl is also highly skilled with various firearms and knives. He has taken a prominent role in safeguarding the members of his group. Rick trusts Daryl completely by the end of the second season, and by the third season, Daryl replaces Shane Walsh as Rick's right-hand man. Although he is shown to be the lone wolf of the group early on in the series, he starts to gradually integrate himself into the group, particularly in his friendship with Rick and his growing relationship with Carol. By the end of the third season, he is well-liked and respected by the entire group. 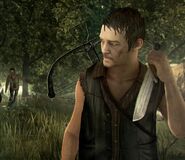 Daryl as he appears in the video game, The Walking Dead: Survival Instinct

Daryl as he appears in Season 1.

Daryl as he appears in Season 2.

Daryl as he appears in Season 3.

Daryl as he appears in season 4

Daryl as he appears in season 5

Daryl as he appears in season 6

Retrieved from "https://hero.fandom.com/wiki/Daryl_Dixon?oldid=1904944"
Community content is available under CC-BY-SA unless otherwise noted.