Playing pranks on his teacher.

Save the world from Syndrome and the Omnidroid.
To rescue his parents and help make Supers legal again (both succeeded).

Dashiell often gets into trouble and loves playing pranks on his least favorite teacher, Mr. Bernie Kropp. He believes that he should use his superpowers; his mother, Helen Parr/Elastigirl, disagrees. His goal is to compete in sports: his power of speed would make him special. His mother forbids it on account that "Everyone's special" (noted by Dash to be the equivalent of saying "No one is").

Dash's reckless nature and one-track mind always gets him into trouble with his big sister, Violet. In one scene, he teases her about her crush on her classmate, Anthony "Tony" Rydinger. This eventually causes a fight that is broken up once Lucius Best/Frozone, a long-time family friend, rings the doorbell. Dash squirts water at Lucius for him to freeze it– a tradition between the two.

When Bob is captured by Syndrome on his return to Nomanisan Island, Helen packs her bags to rescue him after a brief visit with superhero fashion designer, Edna Mode. As she does, Dash sees the suit made for him and puts it on, naming himself The Dash. In their suits, Dash and Violet stow away on the plane Helen has borrowed from a friend. Consequentially, the three are nearly vaporized by an onslaught of Syndrome's missiles. Helen saves their lives by shaping herself into a parachute.

Helen then changes into a lifeboat with Dash serving as the outboard motor– for which Helen praises him upon their arrival at shore. In their camp out (a cave), she warns the children the bad guys they will be facing differ from those on cartoons: these are merciless. Thus, she allows Dash to run as fast as he can.

Being rebellious, Dash hates it when Violet is in charge. He and Violet have another verbal disagreement, in which she is concerned Dash thinks this is merely a vacation. She then lets him know otherwise: "Mom and Dad's lives could be in danger, or worse, their marriage." Dash explores the cave and discovers it's actually a rocket exhaust pipe– and it's being used. They escape just in time and see the rocket off into the night sky.

They spend the rest of the night in the jungle, huddling together to keep warm. The next morning, Dash hears a monitor droid (disguised as a wild bird). Their curiosity triggers a deafening alarm of the droids. Later, the two are cornered by three armed Velocipods. Dash, remembering his mother's advice, starts running. Two chase him (while the third engages an invisible Violet). In this episode, Dash discovers just how formidable his superpower really is: he has a superior reaction time, he can deliver rapid-fire punches (but lacks the strength to do any lasting damage), and at full speed he can run on water. At the end of this "the Hundred-Mile Dash", he gets cornered by the two Velocipods. He stops on the lagoon's surface and immediately submerges– saving his life as his pursuers collide into each other.

Eventually, Dash returns to point A just in time to save Violet from the third Velocipod. Violet then encloses them within a force-field to protect them from gunfire. She discovers that she can float inside her force-fields if she generates them in mid-air. Dash proceeds to move the force sphere by running along its inside surface, i.e. a hamster ball. After destroying a couple more Velocipods, they literally run over their parents. After a brief and joyful reunion, the family works as a super-team for the first time. They are able to quickly overpower the guards before Syndrome shows up and immobilizes the whole family. Upon doing so, he is surprised to learn that Mr. Incredible had married Elastigirl and had kids with her, and is ecstatic that he had captured a whole family of Supers, declaring he had hit the jackpot.

Upon capturing the entire family, Syndrome places them back in the containment unit and describes Operation Kronos: his plan to fraudulently become a superhero. Amidst Mr. Incredible's apology to his family, Violet discovers she can use a force field placed around herself to break free, upon which she rolls to the computer terminal and releases all of their restraints– allowing their escape. There are no jets in the hangar Elastigirl saw during her arrival to Nomanisan Island, but Dash sees a rocket. Unfortunately, Elastigirl has no knowledge on how to fly a rocket. Violet informs her to "just use the coordinates from the last launch." Syndrome's ex-co-worker Mirage, who became an ally of the family after folding her apparent relationship with him, handles that.

Elastigirl holds a van to the rocket as Dash maintains his impatience asking, "Are we there yet?" Upon their landing, Dash and Violet are nearly crushed to death by Syndrome's Omnidroid v.10, but Mr. Incredible saves them. Syndrome loses the remote and, thus, loses control of his Omnidroid. When Mr. Incredible retrieves it, he throws it to Dash who crosses the pond while catching it (garnering amazement from his dad). After the family and Frozone finally secure the remote, Violet and Dash still childishly fight over it until Elastigirl takes it. The Omnidroid is destroyed when Mr. Incredible hurtles one of the robot's claws through the central core.

On their way home, Dash gets excited about how much fun he had during the entire adventure. When they arrive, they are immobilized by Syndrome, who explains he is kidnapping Jack-Jack. He throws the family through a wall, and begins to fly away with the baby. However, he drops Jack-Jack upon the baby showing his powers. Mr. Incredible throws Elastigirl into the air to catch Jack-Jack, and she uses her body as a parachute to get a soft landing for them both. Syndrome is apparently killed when his cape gets snagged in the turbine of his private jet and Violet saves the family from being crushed by plane wreckage, which totals their home. Dash now wonders if they have to move again; to that the answer is yes. When the smoke clears, one of their neighbors, a tricycle-riding young boy named Rusty, is amazed by what happened yelling, "Oh, man… that was totally wicked!".

A few months later, Dash finally gets his chance to participate in track & field, but agrees with his parents that he cannot do anything to compromise the secret of the Incredibles nor grant himself an unfair advantage over the other contestants. Dash restrains himself, running only fast enough to win a silver cup, to which his family cheers. When celebrating Dash's athletic accomplishment, his victory is interrupted by The Underminer. The family dons their costumes and masks, showing their re-dedication to fighting crime.

In the sequel, the fight with The Underminer picks up where it left off and concludes with the Incredibles being arrested for the damages The Underminer caused. Rick Dicker bails them out and escorts them to a motel. The next day, Dash learns that his mother has a new job and that they're moving into a new house. Dash loves his new house and that his father is helping him with his homework. One day, Dash and Bob see a news story about how a rich guy bought the Incredimobile. Dash is amazed his father used to drive such an amazing car while Bob is furious since he was told it had been destroyed. Dash is disappointed that his father restrains himself. His disappointment increases when his baby brother Jack-Jack reveals that he has powers and Bob reveals that he knew all along. The following night, they are attacked by Evelyn Deavor's mind controlled Supers. Dash enables them to escape in the Incredimobile. Dash, Violet, and Jack-Jack sneak on board the DevTech's ship to rescue their parents. After freeing their parents and Lucius from Evelyn's mind control, Dash, Violet, and Jack-Jack help their them defeat her and make Supers legal again. 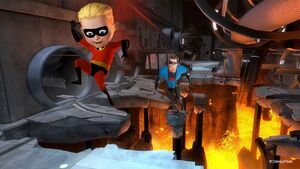