Daughter of Mortis
The Sister (by Thuruht)

Incarnation of the light side

Spread peace and harmony among the galaxy and prevent her brother from escaping Mortis.

The Daughter was a Force-sensitive woman aligned with the light side of the Force who was part of a powerful Force Family called The Ones.

She is voiced by Adrienne Wilkinson.

The Daughter was the incarnation of the light side of the Force and served as a suppressor of her brother, the Son who is aligned with the dark side, thwarting his efforts to escape from Mortis and always battled him for dominance. The Father kept them in balance. Her embodiment through the light side of the Force allowed the Daughter to assume the form a glowing griffin.

During the Clone Wars, a visit from Anakin Skywalker, Obi-Wan Kenobi, and Ahsoka Tano brought conflict between the Daughter and the Son. The Daughter in her griffin form swooped down from the skies and snatched Obi-Wan while her brother in his gargoyle form took Ahsoka. The Father told Anakin to choose which life would be saved, but Anakin used his Force powers by freeing both and making the siblings take their normal forms again.

When the Son attempted to murder their Father, she concluded that her brother must be stopped and took Obi-Wan to retrieve the Dagger of Mortis, the only weapon that could stop him. The Daughter and the Son dueled using their incredible Force powers against each other but the Father arrived and separated them. The Son gained control of the dagger from the Jedi and leaped to strike his Father. The Daughter shielded him from the blow and is mortally wounded as the Son screamed in horror and fled.

As the Daughter dies, the Force began to fall out of balance. Using the last of her strength, the Daughter served as a channel for the Force, releasing her life energies to revive Ahsoka and removed the dark side's strain. The Daughter died and the Father mourned his fallen child. 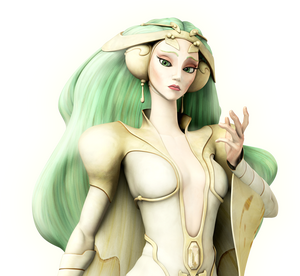 Daughter sacrifices herself to save her Father 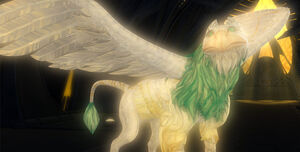 Daughter in her griffin form 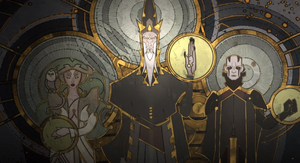