Heroes Wiki
Register
Don't have an account?
Sign In
Advertisement
in: Anti-Hero, On & Off, Tragic,
and 31 more

To be with Jennifer (succeeded).

Redeemed Alcoholic
Davey Stone is the titular main protagonist of Eight Crazy Nights. Although Davey Stone used to be a anti-hero, the real antagonist used to be inside him as he notes that he doesn't like himself very much.

Davey was born in either 1969 or late 1968 to Mr and Mrs. Stone in the town of Dukesberry, New Hampshire.

As a child, Davey played basketball for the Jewish Community Center and did the best jump shot Dukesberry had even seen and was in a relationship with Jennifer Friedman.

On Hanukkah 1981 when he was 12, Davey was playing a basketball game with Jennifer and the rest of their team and won them the game. Afterwards, two police officers arrived at the game and spoke with the game's referee Whitey Duvall and the coach. They give an envelope with Davey's name on it to the coach. The coach went over to Davey and told him what the police had told him and Whitey; his parents had died in a car accident whilst travelling to see the game. The coach then gave the envelope to Davey, which was a Hanukkah card from his parents that had been salvaged from the wreckage. However Davey, unable to take in the news, stormed away and went to the center's locker room. Jennifer, having been told of what had happened, followed Davey and said that she was sorry to not know what to say, to which Davey replied that there is nothing to say and that his parents are dead. He then sarcastically wishes Jennifer a Happy Hanukkah and tells her to leave him alone. Following this, Davey and Jennifer stopped spending time together and Jennifer later moved away. Davey then lived in various foster homes until he was 18 and was even at one point sent to a referral school.

Davey later began living in a trailer and would drink in order to cope with his grief and would commit petty crimes, resulting in him being set to places such as a drunk tank and a psychiatric ward in order to clean his act up, but to no avail.

Davey is first seen in the China Dragon, having drunken four scorpion bowls in five minutes, walking out on his bill given by the restaurant's owner Mr. Chang and eluding the police until he crashed into a couple of ice sculptures with a stolen snowmobile.

In court, Whitey shows up and suggests to the court's judge that Davey become a referee-in-training for the Youth League Basketball.

Davey is told by the judge to do as Whitey says and not to commit even one crime or he'll spend no less than 10 years in the State Penitentiary.

Davey mentally abuses Whitey in the locker room for his hairy butt and "circus feet," and pretends that raising and lowering his middle fingers is his pre-game stretching.

After being forced to remove his shoes and one of the teams loses, he taunts an obese boy by telling him to wear a bra. Later, Whitey takes him to the mall to try and calm him down, but after he meets Jennifer and her son Benjamin, Davey's romantic feelings for Jennifer start to return, but Whitey reminds him that he lost his chance with her 20 years ago.

After the two leave the mall, Davey reveals that he stole peanut brittle and picks on Whitey (for his small size) when he stops the car at Davey's trailer.

After being dropped off, Whitey decides to let this crime go, but that next screw-up, he'd go to jail. Although this is done, Davey ignores Whitey when his car is stuck in the ice.

The next day, as Whitey is cleaning up the porta-potties, Davey angrily shuts him in one of them and pushes it down (and later sprays water on him to freeze him).

Later that night, as Davey (along with Whitey and Benjamin) is watching two bigger men play, he bets with them that if Davey's team wins, the loser has to eat the jockstrap of a large sweaty man.

Davey and Whitey play without any shirts on until Whitey gets hit silly by a ball and is set onto one of the bleachers (and Davey puts Whitey's hand into the latter's own pants).

Finally, Davey replaces Whitey with Benjamin and helps him out. After the game is won, Davey influences Benjamin to call one of those players a bad name (as he tells him to eat that jockstrap), but that angers Jennifer who declares that "one Davey Stone is enough".

As he was arriving home, Davey finds out that the player, who was sentenced to eating the jock strap, was burning his trailer.

Then, Davey runs in to save the unopened Hannukah card he got from his parents and reluctantly accepts Whitey's invitation to stay with him and his bald, diabetic, fraternal twin sister, Eleanore.

Davey starts to change his ways until one day, at a skating rink, Whitey reveals Davey's sad past. For this, Davey gets angry with Whitey and tells him that he'll never win the All-Star Banquet patch, because no one in the town knows that he exists.

Then, he steals Eleanore's wig which he tries to throw at Jennifer for questioning his nastiness to the twins, but it lands on Mr. Chang's head.

That night, a drunken Davey breaks into the mall to yell at an obviously-absent Jennifer, but the mall logos (led by the Foot Locker logo) confront him to try and make him cry (which should have been done 20 years ago).

Because it doesn't work, they bring in Davey's Hannukah card, revealing his parents congratulating him 20 years ago. Finally, Davey breaks down and cries just as the police arrive, but Davey escapes (on a bus to NYC until all of its tires popped from a thumb tack) in hopes that he will be free.

Davey decides to apologize to Whitey and keeps hiding from the police. Finally, at the All-Star Banquet, as he enters and decides to talk, the police start to arrest him and the judge is about to start his 10-year sentence (in the state penitentiary).

However, Jennifer orders them to let him talk (because it is the holidays). Davey then starts convincing everybody that Whitey should have won because of what a great man the latter was.

So, Davey was not sent to jail after all. Instead, he goes to apologize to Whitey (who is given the award that was already given to a hook-handed man named Tom Baltezor and later, all of the previously-won patches especially three won by a three-breasted woman named Mrs. Selman).

Then, Davey and Whitey have become friends and the former reconciles with Jennifer. 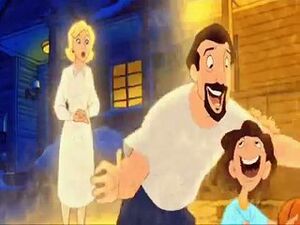 Young Davey and her parents. 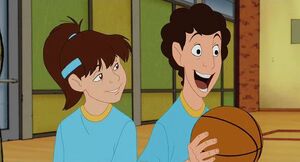 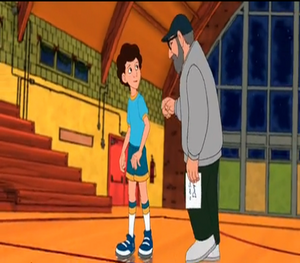 Davey being told of his parents deaths and being given their Hanukkah card to him. 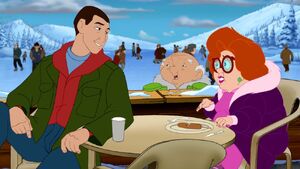 Davey with Whitey and Eleanor. 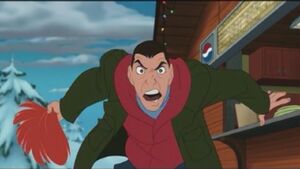 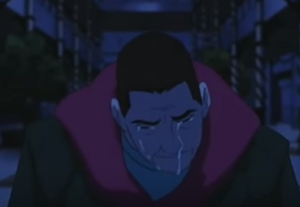 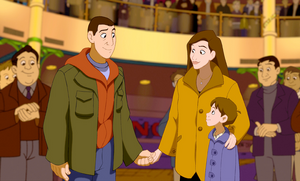 Davey with Jennifer and her son Benjamin.
Community content is available under CC-BY-SA unless otherwise noted.
Advertisement