Heroes Wiki
Register
Don't have an account?
Sign In
Advertisement
in: Mature, Call of Duty Heroes, Military,
and 18 more
English

Being with his family
Nurturing Riley

Get revenge on Gabriel Rorke for killing his father. (ongoing)

Lieutenant David Walker (nicknamed: Hesh; born 1999) is the deuteragonist of Infinity Ward's Call of Duty: Ghosts along with his father and younger brother.

He is the sole member of the Ghosts that does not donate a mask, but instead facepaint. According to his father, Elias, one of the founders of the Ghosts, David is one of the best soldiers of force.

He is voiced by Brandon Routh, who also portrayed Superman in the titular 2006 film Superman Returns and Ray Palmer/Atom in the Arrowverse, and later portrayed an alternate Earth Superman in Crisis on Infinite Earths.

David Walker is the first son of Elias T. Walker and a unnamed mother, born in 1999, San Diego, California, and is the older brother to Logan. Despite their mother's passing, David and Logan had a close bond, with Elias noting that Logan would follow in David's exact footsteps when younger.

The brothers were highly encouraged to join the military, and were trained to hunt and become men by Elias. Around the same time, the family get a dog named Riley, who David became very close to. In his youth, David took the nickname "Hesh", at joined the military when he reached eighteen in 2017.

While outside his home with his father and brother, he hears of how the "Ghosts" were formed during the Tel Aviv War. Hesh doubts the story, but his father responds that he believes that the story is true, and the family decide to head home. While returning home, they felt tremors that they thought were earthquakes, but learned that something else was happening. Elias responded that is was ODIN, and the family and Riley survive the attack on Los Angeles.

The Federation and the United States broke their truce and began a war, with Hesh and Logan having to join the U.S. Army to fight against them. During this time, Hesh and Logan rose to the rank of sergeant, and were eyed for the Ghosts, with Elias believing that they were the best.

After performing a recon sweep outside the wall of No Man's Land, Hesh, Logan and Riley return to Elias to see what's next for them. Elias decides to send them to regroup with a recon that is in No Man's Land, and Hesh leads his brother and Riley inside Federation territory. During their search for the unit, Hesh and Logan return to their former home, and Hesh collects the family's shotgun. After dealing with Federation forces, Hesh and Logan spy on a Federation commander interrogating a soldier, who is later revealed to be Ghost member Ajax.

Hesh and the group meet with the recon unit, who is Thomas Merrick and Keegan Russ, who saved them from a pack of wolves. Merrick tells Hesh that their mission now is to rescue Ajax from the Federation, as he is being held at the Greenway Park Stadium. Hesh participates in attacking the Federation at the station, and the team find a wounded Ajax, who informs them that Rorke is targeting the Ghosts before dying.

The group return to the base in California, and have to fight off the Federation who have started Operation Homecoming. Hesh and Logan hold off multiple Federation soldiers, and decide to rescue their father since they are becoming overwhelmed. Hesh later saves Logan from a maniac soldier, and the two are rescued by Keegan and his father, who reveals himself to be the commander of the Ghosts. Afterward, Elias tells Hesh and Logan about Rorke, who was the original leader of the Ghosts before he went M.I.A. after participating in the assassinations of Federation leader Diego Almagro.

Hesh is sent to find leads on Rorke with Keegan and Logan, and the group go the Federation Capital in Caracas during Federation Day. After neutralizing hostiles, the trio manage to interrogate Victor Ramos, but are forced to escape the building when Rorke destroys the place with explosives. The intel the group receive reveal that Rorke is hiding in a base at the Gulf of Mexico, and the Ghosts participate in capturing him with the aid of Pirate Five-Zero. The Ghosts interrogate Rorke, but he is rescued by a Federation plane, and the team barely survive and land in the Yucatan. After regrouping with the others, the team evade soldiers and escape with the help of Neptune.

Elias decides that it's time to weaken the Federation, and sends the Ghosts to attack an oil station in Antarctica called Atlas. The Ghosts managed to destroy the station, crippling the Federation's oil supply, thus luring the Federations' fleet that Logan and Keegan later destroy. Hesh later participated in infiltrating a factory in Rio de Janeiro, and the team learn that the Federation have reverse-engineered ODIN, and escape after Elias orders an air strike on the facility.

Hesh goes to Las Vegas with Elias, Merrick and Logan, but they are ambushed and captured by the Federation. Rorke interrogates the group, and later kills Elias in front of Hesh and Logan, who swears vengeance. Hesh, Logan and Merrick are saved by Keegan, and the group escape with an injured Riley to a Blackawk called Prince Two-Zero. The group are sent to the U.S.S. Liberator, and Merrick makes Hesh a field commander while he becomes the commanding officer of the Ghosts. Hesh later participated in protecting the ship from the Federation, but later have to escape due to the ship sinking.

Hesh and Logan later attacked a Federation base to hack the satellite of LOKI, and the two decide to get their revenge on Rorke after learning he's escaping on a train. The brothers fight their way to Rorke, and Hesh orders LOKI to launch a missile to the train, causing it to crash and go deep underwater. Hesh awakens and hits Rorke with a fire extinguisher, and orders Logan to shoot Rorke and him top kill the general, and falls unconscious afterward. Logan saves Hesh and brings him to a beach, where the brothers celebrate their victory of stopping the Federation. However, Rorke survived the attempt on his life, and captures Logan to brainwash him to target the Ghosts. Hesh is last seen calling out to his brother, as Rorke drags him away. 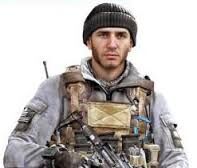 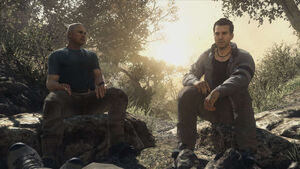 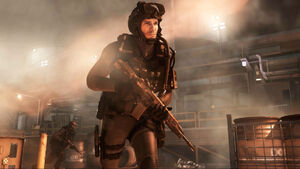 Hesh in gear while attacking the Atlas platform. 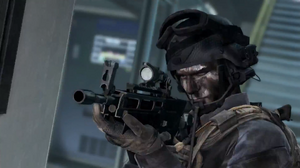 Hesh in combat during "Severed Ties", a shot of his face paint. 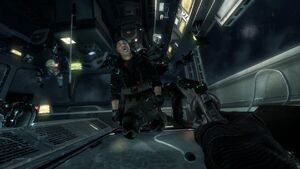 Hesh shot by Logan via his order to kill Rorke. 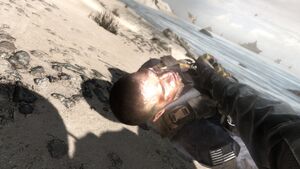 Hesh being saved by Logan. 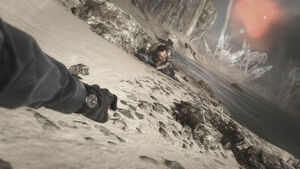 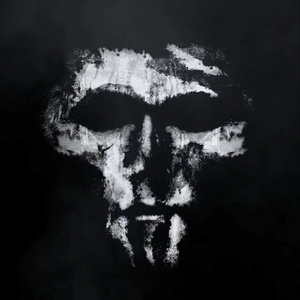