Officer of the Navy SEALs

Find out the truth about how his father died when he was a kid from Frank Woods (both succeeded).
Have a family reunion with his father (determinant).

He is a Lieutenant Commander of the U.S. Navy SEALs and SEAL Team Six, and also acts as the commander of SEAL operators engaging in strike force missions. He is also the only son of Alex Mason and former ward of Frank Woods, former agents of the Central Intelligence Agency and the retired officers of the United States Marine Corps, who also battled David's foe, Raul Menendez. During the course of the campaign, David would learn of his connection to Menendez, and would stop the terrorist during the height of the Second Cold War.

David Mason was born in 1979 in the United States (presumably Alaska) to Alex Mason, a former CIA agent and USMC captain, and his unnamed wife. David was raised in Alex's hometown of Fairbanks, but had a strained relationship with father due to the latter's military experience and later the death of David's mother. Despite developing a resentment of his father's commitments to his country over him, David didn't want to lose him and made him promise to not do any more missions. When Alex would have to do missions during the early 1980s, David would be taken care of by Jason Hudson's wife, whom Jason noted loved having him. Alex's close friend Frank Woods would also act as another family member to David, since he was given the title of honorary uncle.

Around 1985/1986, Alex returned to the CIA's service when Woods was captured in Angola, thus breaking his promise to his son to not return to active duty. Mason, Woods and Hudson would become enemies to the cartel leader Raul Menendez, who became embittered to them due to Mason taking his eye and Woods accidentally killing his sister in Nicaragua. As a result, Menendez plotted to have his revenge against the three, and in 1989, kidnapped David and brought him to Panama. While being tied up by Menendez, David was taunted by him, and Hudson was forced to work for Menendez to plan his revenge to protect David from harm. After Woods was tricked into killing or wounding Mason, David would find the corpse (or an unconscious) Alex and cry out for his father.

David was left traumatized from the events, and after mourning the death (player-determined) of his father, he was adopted by a crippled Woods. Due to his trauma, David didn't remember that Menendez had been responsible his father's possible death, and Woods lied to David that "some nut" had did the act. It's unknown if David kept in contact with Hudson's wife and children, but he would be raised by Woods until the latter was sent to the Vault due to his knowledge of the CIA's past operations.

Around his late teens to early twenties, David decided to join the United States Navy, and was commissioned as an officer in 1996. Receiving naval training, David eventually made to the SEALs, and later joined SEAL Team Six where he reached the rank of lieutenant commander. During his tenure in the navy, David became friends with Mike Harper and Javier Salazar, who later became members of his team during the Second Cold War. When Menendez started his rise of power, Mason was given the rank of commander and received the code name "Section". At an unknown point in time, David would marry an unnamed woman and have two daughters, Savannah and Lucy Mason.

After Menendez visited Woods in the vault, Mason was tasked with learning of Woods' encounters with the terrorist previously during the 1980s. Woods would explain the past events of each encounter, first starting when Menendez tortured him back in Angola but he was rescued by Alex and Hudson. The second encounter wasn't direct, but tied directly when the Mujaheddin betrayed the Americans since they were connected to Menendez. Woods then told of the third encounter when the CIA were assigned to assassinate Menendez with the assistance of the Panama's head Manuel Noriega. During the operation, Woods accidentally killed Menendez's sister when he saw Raul, as Noriega let him go previously. As a result, Menendez became hell bent on getting revenge on Woods and the United States, since the latter caused the fire that disfigured his sister. Though shock of Woods' actions, David asked Frank why he was still alive since Menendez wants revenge, Woods ignored the question and told him to find "that maniac".

After learning of Woods' past with Menendez, Mason went on to investigate Raul's group Cordis Die's presence in Myanmar. Going through the facility, Mason and his team that consist of Harper, Salazar and Crosby learn from Erik Breighner that Menendez plans on using Celerium to cripple the world's technology. Despite Breighner's death, Mason and the team managed to obtain the Celerium core and give it to Admiral Tommy Briggs. A month later, Admiral Briggs assigned Mason and his team to discover what Menendez's right hand DeFalco was doing in Pakistan, and Section was able to figure out that Menendez was part of Alex's death after hearing Harper say the phrase "suffer with me". The group succeeded in infiltrating Anthem and recorded Menendez's conversation with the ISI leader, learning that Tian Zhao was secretly assisting Cordis Die and that DeFalco was assigned to capture "Karma".

Section and his team were forced to escape from the area after Menendez revealed that he knew of their infiltration, and the group came across Zhao and his forces. Returning to the U.S.S. Obama, Section believed that "Karma" was a cyber weapon, and learned from the recording that "Karma" was on the island resort Colossus. Mason, Harper and Salazar traveled to the resort and learned that "Karma" was actually a woman named Chloe Lynch and that Menendez had placed bombs on Colossus as a distraction. Though they were able to reach Chloe, she decided to give herself in to DeFalco when the latter started to kill hostages. After dealing with DeFalco's men in Club Solar, the player has the option to either rescue Chloe and kill DeFalco, or fail and allow DeFalco to escape with her. If the player fails to catch up to DeFalco, they are given another attempt to rescue Chloe in the strike force mission "Second Chance".

After his mission on Colossus, Mason returned to Woods since the latter still had information, and learned that Woods was tricked by Menendez to kill (or wound) Alex. Despite being shocked by this, David told Frank that it wasn't his fault, and reassured him that he will stop Menendez and his plans. Now more determined to stop Raul, Mason was part of the operation to capture Menendez during his rally in Yemen. Mason would either learn that Farid or Harper were killed, but continued and captured Menendez when he attempted to escape on a VTOL. Taking the terrorist back to the U.S.S. Obama, and interrogated Menendez, but it was cut short when Admiral Briggs told David that Cordis Die were attacking the ship.

While being informed of the attack, Menendez "took" Salazar hostage, forcing David to drop his gun and be incapacitated to save Javier. Once coming to, Section battled Cordis Die while reaching to the sever room, where he witnessed Menendez kill (or wound) Briggs and Salazar's betrayal. Depending on the player's previous choices, Chloe can be either saved by Farid, who sacrifices himself to prevent her from being killed by either Salazar or DeFalco. Once reaching the room, Chloe or the technicians will work on rebooting the world's defense systems since Menendez placed the Celerium worm into the computer. Mason then confronted Salazar, who is either arrested or killed by Harper if the latter is alive. Afterward, Mason, Harper (if alive) and Crosby leave the U.S.S Obama, and depending if the player finished all of the Strike Force missions, the ship is saved by Chinese fighters.

Believing that Menendez's intent is to kill the president, Mason was tasked to escort President Marion Bosworth to safety while dealing with Cordis Die in Los Angeles. Section was assisted by either Harper (if alive) or USSS agents to protect the president, and managed to do so by flying Captain Andersons FA-38 to the Prom Night Hotel. After Bosworth was secured, Mason was tasked to assault Menendez's facility in Haiti to stop the systems and either eliminate or apprehend Raul. In the system room, Mason and the group saw a live broadcast by Menendez, who destroyed the drone army and ordered his followers to strike. Mason then continued his pursuit with Harper (if alive), and managed to stop Raul from escaping.

Confronting his enemy, Mason is given the choice to execute or capture Menendez, which has a major impact on the ending. Canonically, Section executes Menendez, and then leaves the hanger either alone or carrying Harper (if the latter was chosen to live). The other option is to spare Menendez, who becomes enraged, screaming at David to kill him so he can be martyred. Taking him to the VTOL, Menendez will reference Ulysses, but Section tells the soldiers who are carrying him off that he's just a sad old man talking to himself.

Mason executes Menendez, thus causing a video to be uploaded online that explains that he has been killed. As a result, there is public outcry and there are riots across the world, which ends on the attack of the United States government.

If Alex was wounded in Panama, David and Woods will reunite with Alex, who simply states that he survived because Frank is a "lousy shot". Woods will leave the room to get smokes, and Alex tells his son that the day he got the scar on the his was the day he became proud of him.

If Alex was killed in Panama, David and Woods visit his grave, and Section states that he's going to retire from the navy.

If Chloe survives Salazar's betrayal, she will able to stop Menendez's cyber attack, and latter appears on Jimmy Kimmel's show. Menendez will remain imprisoned, where he angrily watches Chloe appear on Jimmy Kimmel and proceed to smash his television in a fit of rage.

If Section decided to spare Menendez and Chloe was killed by either DeFalco or Salazar, Raul will escape from custody, kill Woods at the vault and commit suicide at his sister's grave.

Though Mason doesn't appear in Black Ops III, it's mentioned that Coalescence Corporation head Sebastian Krueger wanted information about him.

Though Section only appears as a playable skin in the Blackout mode, his children Savannah and Lucy are major characters in the Specialist story. 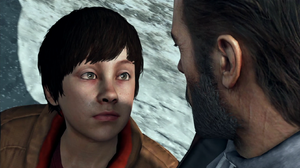 David with his father, Alex, in Alaska. 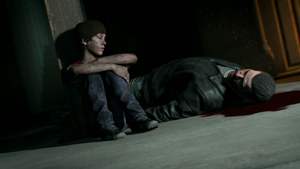 David besides his wounded father in "Suffer with Me". 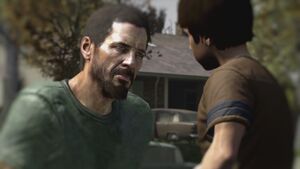 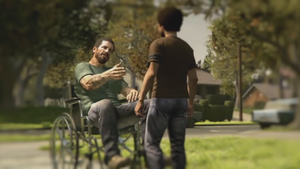 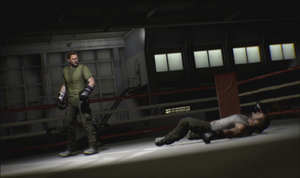 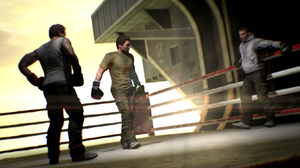 Section with Harper and Salazar. 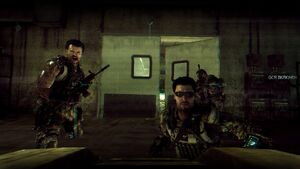 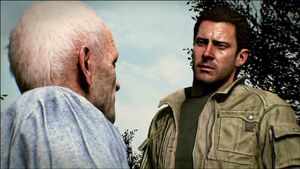 Mason listening to Woods re-tell the events of Panama. 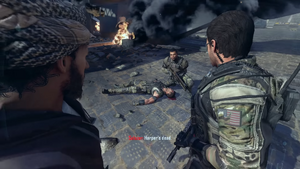 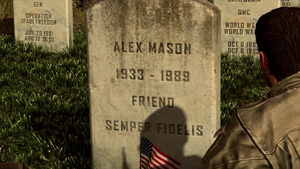 David at his father's grave (determinate). 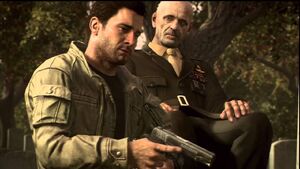 Section placing an M1911 on his father's grave (determinate). 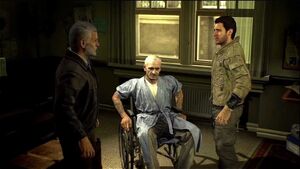 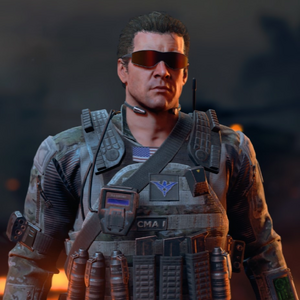 Mason as a playable skin in Black Ops 4.