David is the tetartagonist of the anime series Blood+. He is a member of Red Shield, an organization dedicated to killing Diva and Chiropterans, who works as an agent assigned to direct collaboration with Saya Otonashi.

David was the only survivor of a chiropteran attack on his special forces squad before joining the Red Shield. His father was also a member of Red Shield and was one of Saya's victims in the Vietnam incident. It is implied that he, along with Joe Goldschmidt IV, are the only members that are descended from a line of Red Shield operatives.

David is a tall, well-built man with blond hair, dark eyes and a stern expression. He is usually seen wearing a simple black suit with a black tie.

David tends to be a straight-faced and serious man, with a somewhat cold personality. However, he also assumes an unofficial guardianship of Kai and Riku, and would be instrumental in helping Kai come to terms with what Saya is and with Riku's conversion to a chevalier. He has a very pragmatic yet cynical view on life, believing that everyone must eventually go through hardship.

He seems to take a particular interest in helping Kai grow up to be a strong man who can support Saya and Riku as their brother, despite their unusual natures. He is shown to be very strict when dealing with Kai, saying he would only give him back his father's gun when he proved he understood what it took to own it.

Although David can often be very serious and cold, going so far as to completely pound Kai to teach him a lesson about the kind of world they're in and force Saya to fight despite knowing full well that it's tearing her apart, he appears to have a softer side in front of young girls like Mao and Kaori.

David is also unshakably determined; Lewis states that after his special forces were annihilated, he made a vow to keep on fighting no matter what. At one point, Lewis even describes him as being 'indestructible'. 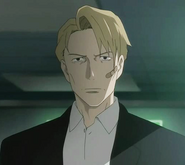 David cursing that the container holding Diva got away with its helicopter. 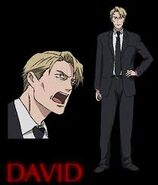 David in his tuxedo.
Add a photo to this gallery
Retrieved from "https://hero.fandom.com/wiki/David_(Blood%2B)?oldid=1970478"
Community content is available under CC-BY-SA unless otherwise noted.