David Evans is the main protagonist of the ARG Series, TalesFromTheSpidersWeb.

While he claimed that his channels main purpose was to document footage of him and his friends, he seemed very notable about the strange man appearing in his videos, although seemingly trying to ignore him at the same time. He eventually revealed that he had been posting videos on the channel under the ruse of simply documenting him and his friends hanging out.

David undergoes a dramatic change in appearance and personality. Initially, he is shown as an awkward high schooler who has trouble speaking his mind and opinions. When he began seeing the Slender Man, he thought he was mentally ill, so he started hanging out with his few friends and began documenting himself to ensure to himself that he was sane. He originally had short hair and glasses.

In more recent videos, David seems to have become more outgoing and even a bit sarcastic. He claims that his vision has improved and no longer wears glasses. He also notably grows out his hair. While these changes occur, David begins sleepwalking, or rather, wakes up and does things without remembering it. Some of which involve traveling from his house all the way to the same park Noah Maxwell has been to, and rides his bicycle around his neighborhood. Why these events occur hasn't been revealed yet.

Eventually in the series, he was captured by Clowny, and went missing for a long time. A few unclear videos are uploaded which shows David wandering vast fields. He hasn't been seen again since the video MESSAGE RECIEVED, where he is shown wearing the Plastic Mask, which was also worn by the cryptic Mr. Plastic. Mr. Plastic was an unknown assailant who would send the TalesFromTheSpidersWeb characters various messages, and has been seen in the company of Clowny. In the video 34T, he is shown reluctantly cleaning up Clowny's mess after he murdered someone. 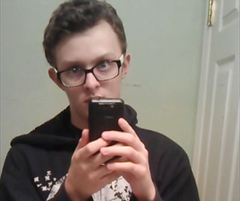 David as he appears at the beginning of Season 1. 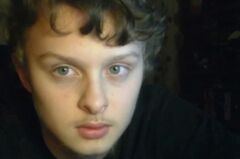 David as he appears in the midst of Season 1.
Add a photo to this gallery
Retrieved from "https://hero.fandom.com/wiki/David_Evans?oldid=1783311"
Community content is available under CC-BY-SA unless otherwise noted.