He is voiced by Jason Scott Lee in the original film and its sequel, and Dee Bradley Bake in all other appearances.

David Kawena is Nani's boyfriend. David is a great surfer. Like Nani, he also has trouble finding employment. He is also one of the only four recurring human characters (the other three being Victoria, Cobra Bubbles and later Mertle) aside from Lilo's family who is aware of the aliens and experiments.

David is a good natured but clumsy individual. He is very kind and a good loyal friend to Nani, Lilo and their adopted ʻohana. He cares for Nani as more than a friend but is very patient with making the next move as he understands the stresses of finding and keeping a job and taking care of a family. When Nani states her ʻohana is a little strange, he states that her and Lilo's ʻohana is the tightest ʻohana he has ever known and wished he had as close a family bond, implying he is estranged or doesn't have strong family bonds, or that he doesn't have a family. He is not the smartest individual, but makes up for it with compassion and patience and can at times be wise, as shown when he teaches Lilo about Yin and Yang and working together with Stitch.

He treats Lilo like a little sister and helps watch out for her. He also enjoys hanging out with Jumba and Pleakley, inviting Jumba to go surfing with him and going along with Pleakley's plan to make Nani jealous by having Pleakley pretend to be his date in Lilo & Stitch 2: Stitch Has a Glitch (though he was very reluctant and knew it wouldn't work). He can be very romantic and bashful when it comes to Nani, but cares for her deeply. He is also very calm, going along with whatever is happening and not losing his temper or freaking out and being peaceful, preferring talking and peacemaking rather than violence.

David first appears at the luau Nani works at as a fire performer, although he makes a mistake at the end and sets himself and the stage on fire. He is shown to be good friends with Lilo and Nani already. He later appears at the beach after Lilo and Stitch interfere with Nani's attempt to be a lifeguard. He then encourages Nani to take Lilo surfing with them to improve their mood. He and Nani have fun together along with Lilo and Stitch throughout the movie and become great friends by the end of the film.

Lilo & Stitch 2: Stitch Has a Glitch

David appears in Stitch Has a Glitch, where he tries numerous times to date Nani. However, Pleakley keeps interfering by trying to woo David himself (while dressed as a girl) in an attempt to make Nani jealous. David is later seen riding with Nani when Stitch runs away, due to his glitch, and mourning over Stitch's apparent death with the others. When Lilo's tears revive Stitch, David and the others cheer. He is last seen dancing the hula with Nani and the others. Nani briefly plants a kiss on David's cheek, much to his astonishment. He then smiles.

David is closer to Nani in Stitch! The Movie, though they have not officially dated yet. His role is also smaller here. When he considers the outing with Nani a date, she tells him that she doesn't think she's ready for an actual date. Later, David finds out from Lilo that Jumba was kidnapped by Gantu, to which he inquires, "The Big Dummy?", repeating what Lilo calls Gantu herself. When Lilo and Stitch go on a mission to rescue Jumba and the experiments, David is not seen again until the very end of the film.

David has an even smaller role in the series, although he does make several appearances in certain episodes, including "Richter", "Cannonball", "Yin-Yang", "Splodyhead", "Fibber", "Amnesio", "Poxy", "Hunkahunka", and "Wishy-Washy". He was also mentioned in "Finder", where Nani was getting ready to go on a date with David, as well as in "Shush", where Lilo thought Nani was talking bad about David and calling him dumb to a friend on the phone while eavesdropping on her through Experiment 234 (Shush), only for Nani to reveal that she was talking to David about a dumb male character they saw in a film they just watched.

In "Richter", David comes by the house to tell Nani that her boss has requested her to come to work, even though it is her day off.

In "Cannonball", he tries to cheer Lilo up by taking her and Nani to the pool at the Birds of Paradise Hotel, despite the pool being reserved only for hotel guests, though they were caught in the end by Mr. Jameson. David was later seen at the end of the episode surfing the waves that Cannonball made.

In "Yin-Yang", he teaches Lilo the meaning of yin and yang when she and Stitch have trouble working together. However, after two experiments get activated at the same time, Lilo and Stitch eventually team up and successfully capture both experiments, which they name Yin and Yang. After they were rehabilitated, Yin and Yang were seen working together to build a whole new island, and David was impressed when Lilo learned the meaning of yin and yang.

In "Splodyhead", David appears driving a motorboat alongside Nani, where they rescue Lilo, Stitch, Jumba, Pleakley, Gantu and Experiment 625 from the Forbidden Island of Niʻihau, which the group had been stranded on for hours.

In "Fibber", he heard Nani was getting married to someone (it was actually Pleakley, but they were only trying to fake marry to get his mother to leave him alone about needing to find a woman but Nani backed out at the last second). He then ran to her house with a bouquet of flowers and begged Nani to take him back, only for her to look at him confused and him hiding the flowers behind his back in embarrassment. After the charade was cleared up, when Pleakley's brother asked if he could marry Nani, both Nani and David exclaimed, "NO!" and blushed while awkwardly but flirtingly looking at each other.

In "Poxy", David helped Nani get Lilo off a malfunctioning wave rider. He later went with Nani for wave riding.

In "Hunkahunka", he convinces Nani to go on a date, he gets pecked by Hunkahunka (a love-inducing experiment and one of Stitch's cousins) and temporarily falls for some other woman.

In "Wishy-Washy", he appears when Lilo wanted to have a perfect family consisting of her, Nani, and David so it would look like she had a normal family. She wished David was smart so he could be more attractive to Nani but it had the opposite effect because it made him too smart. This was caused by the wishing experiment Wishy-Washy. David then told Lilo that her family was perfect the way it was, and he wished he had a family as close as hers. She then wished David back to normal and he made up with Nani, who was more than happy to have him back the way he was.

David is only seen at the end of the film when Lilo takes a picture of her whole ʻohana (including all of Stitch's cousins from the series). 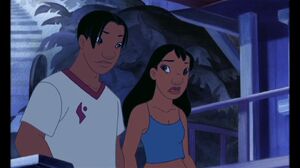