Heroes Wiki
Register
Don't have an account?
Sign In
Advertisement
in: Officials, Dead by Daylight Heroes, Tragic,
and 23 more

David Tapp is a protagonist in the 2004 slasher movie, Saw as well as the protagonist of the 2009 horror survival game also named Saw. He is a detective with an obsession for catching the Jigsaw killer, often disregarding his own safety and sanity.

He is portrayed by Danny Glover in the movie. In the games he is voiced by Earl Alexander who also plays Louis in the Left 4 Dead series and he is voiced by Dave Blake in Dead by Daylight.

During the movie, Tapp and his partner Steven Sing are investigating a number of murders involving difficult puzzles which result in horrific deaths. At first Tapp was dismissive of these murders, thinking them to be just another deranged lunatic. The two discover fingerprints of a doctor named Lawrence Gordon who they bring to custody along with a survivor of the tests named Amanda Young.

After analyzing evidence, Tapp and Sing arrive to Jigsaw’s “Hideout” which was actually just a trap, resulting in Tapp being injured and Sing’s death. Upon recovering, Tapp became obsessed with solving the Jigsaw case, resulting in him being discharged and divorced. During a stake out, he discovers a suspect named Zep Hindle who was taking a family hostage. Tapp chases after the suspect and after a brief struggle, “dies”.

It is revealed that after his “death”, Tapp was nursed back to full health to be tested by Jigsaw’s various traps. During the game, he is forced to save many of Jigsaw’s captured victims such as Amanda Young who is now Jigsaw’s apprentice, Jennings Foster who killed a person in a hit-and-run while framing someone else, Melissa Sing who was Sing’s wife, Oswald McGillicutty who created the “Jigsaw” nickname, Obi Tate who is an arson wanting to be tested, and Jeff Ridenhour who was a victim in the movie.

Tapp is shown to be an older male in his mid-50s, around 6 feet tall during the first film's timeline. Due to his age, his physical capabilities are below average which improved during the Saw game. Tapp's most distinguishing attribute is his thickly scarred neck which has made his voice hoarse. In Saw, he wears a black coat and jeans, which serves as common cosmetics in Dead by Daylight, in said game, his default outfit consists of a bullet proof vest, a badge, a black hat, blue shirt with rolled up sleeves and black pants.

David Tapp returns in Dead By Daylight's 7th chapter, Saw, alongside the Gideon Meat Plant as a map and Amanda Young, also known as The Pig, as a killer. His in-game lore says that, after he was shot in the chest and left for dead, he was taken by the Entity to participate in the trials.

Tapp is surprisingly adept at close combat, able to fight off any assailants in the Saw game.

In Dead by Daylight, Tapp comes with 3 teachable perks. Tenacity allows him to crawl faster and recover at the same time. Detective’s Hunch allows him to see the locations of important objects after a generator is repaired. Stake Out guarantees great skill checks based on the number of tokens he has obtained. 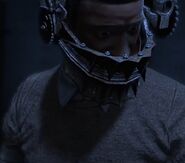