Davie is a cat-like fairy, one of the four main mascots in Doki Doki! Pretty Cure. She is very independent, much like her partner, Cure Sword, but she often worries about Sword. She ends her sentences with "~dabyi!".

She is voiced by Yumi Uchiyama in the Japanese version, and by Erica Mendez in the English version.

Davie has purple fur in different shades, and two cat-like ears. There are deep purple spade-like markings on her ears. Her eyes are deep purple, with eyelash-like markings. Her tail is long and smooth. She wears a narrow frilly piece as a collar. She also wears a large purple frilly ribbon on her head, decorated with a silver heart medallion.

Davie is very independent, and she often worries about her partner Sword.

Dabyi has the rare ability to fly, turn into a Commune and help a Makoto transform into Cure Sword. She can also turn into a human, playing the role as Makoto's manager D.B.

Dabyi in her human form as Makoto's manager.
Add a photo to this gallery 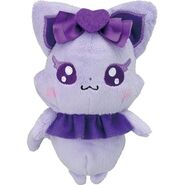 Add a photo to this gallery
Retrieved from "https://hero.fandom.com/wiki/Davie?oldid=2115049"
Community content is available under CC-BY-SA unless otherwise noted.