Hand of the King, Lord of the Rainwood, Admiral of the Narrow Sea, knight and head of House Seaworth, King's man, sailor, captain of Stannis and Robert's royal fleets, royal counsellor and deliverer, landed knight (formerly), captain of Black Betha (formerly), smuggler and captain of a crew of criminal sailors (formerly), collaborator of pirates (formerly), cabin boy of the Cobblecat (pirate ship), beggar (as a child)

One of the most highly skilled sailors of the world, stealth, strategy, oratory (very good at convincing people), good advisor, rallying allies

Drink ale with his friends and sons; sailing in the seas and see new things; hunting; learning things with Maester Pylos, Shireen, Devan, and Edric; spend some time with his wife and sons in Cape Wrath

Serve Stannis in the best way he can and help him to claim the Iron Throne, prevent Stannis from becoming a villainous person, keep Stannis away from Melisandre's aggressive counsel, survive against the Queen's men, rally the North on Stannis's side, find Bran and Rickon Stark, survive winter and the threat of the Others, see one day to his wife and 2 youngest living children again

Davos Seaworth is a major character and protagonist in the ASoIaF novels and its HBO adaption Game of Thrones. Lowborn and a former smuggler, he becomes a landed knight and later a lord, as well as the right hand to rightful King Stannis Baratheon and the closest thing Stannis has to a friend. Davos is the head of House Seaworth and later also Lord of the Rainwood, Admiral of the Narrow Sea, and Hand of the King. He's also the captain of Black Betha. His wife tends his lands on Cape Wrath.

He is the voice of reason in Stannis's ear, constanty clashing with the King's other advisor, the red priestess, Melisandre. Davos is a man that is loyal and above all honorable alway willing to stand up for what he sees as the right and just thing to do.

During Robert's Rebellion Stannis was besieged in Storm's End by Mace Tyrell and Paxter Tyrell, holding the castle for a year and almost starving to death in the process. However Davos evaded the Redwyne fleet and smuggled a ship of onions and salt fish into Storm's End. This enabled the garrison to survive long enough for Eddard Stark to lift the siege. For this service Stannis knighted Davos and gave him lands and a keep. However he removed the joints on four fingers on Davos' left hand as punishment for his previous smuggling. Davos accepted this as long as Stannis did it himself, which happened. Davos married Marya, a Carpenter's daughter, and had seven sons. He loves his wife, though he has known other women.

When Stannis' older brother King Robert Baratheon dies Stannis claims the Iron Throne, having discovered that Robert has no legitimate children. Stannis sends Davos and his sons to carry the message across the western coast of Westeros, though is unable to get any allegiance outside of the Lords of the Narrow Sea, around Dragonstone. When Stannis attacks King's Landing in the Battle of the Blackwater Davos commands a ship. However Tyrion Lannister's wildfire trap burns most of Stannis' ships, including the three Seaworth ships. Davos' four oldest sons are killed. However Davos swims under the harbor chain and survives. His fifth son Devan is a squire to Stannis and escapes the Blackwater with his King.

Davos blames the R'hllor Priestess Melisandre and plans to kill her, however is arrested by Ser Axell Florent, castellan of Dragonstone and uncle of Stannis' wife Selyse Florent. Stannis lets him out to hear his counsel on Axell's plan to attack the nearby and undefended Claw Isle in retaliation for Lord Celtigar bending the knee to Joffrey. Davos counsels they don't, as Claw Isle is undefended due to many of its men fighting and dying for Stannis, saying Lord Celtigar was captured with many of his men and bent the knee to save himself and them. Axell objects, but Stannis sends him out. He agrees with Davos, saying Axell's plan was evil. Stannis then makes Davos Lord of the Rainwood, Admiral of the Narrow Sea, and Hand of the King for his good service.

Later Stannis considers burning Edric Storm, a bastard of Robert's, for Melisandre's spells. He has already used Edric's blood in leeches to curse the three rival Kings. After Balon Greyjoy and Robb Stark die Stannis begins to come over to Melisandre's way of thinking, but is still reluctant to sacrifice his nephew, despite Selyse and Axell counselling him to. Davos points out not all the other Kings are dead, which Stannis agrees with.

After Joffrey's death, Davos, with the aid of Rolland Storm, smuggles Edric off Dragonstone, sending him to Essos. He confesses to Stannis what he did. Stannis prepares to execute him, but Davos shows a letter from the Night's Watch, pleading for help against the Wildlings, and convinces Stannis to aid them. Stannis takes most of his army North and defeats Mance, saving the Night's Watch.

Davos is sent to the North's only city, White Harbor, to gain the support of its Lord, Wyman Manderly, the richest man in the North, who lost one of his sons, Wendel, at the Red Wedding. Davos finds three Freys there and tries to convince the Manderlys to support Stannis, but Lord Manderly sentences him to death. Davos' head and hands are placed on the walls, but in reality a similar-looking criminal was executed in Davos' place, his fingers shortened. Davos is imprisoned but treated well. He is then taken by Robett Glover to Lord Manderly. Wyman tells Davos he was forced into this charade as his only surviving son, Wylis, was the Lannister's hostage. Now Manderly's heir has been returned, Wyman says he is ready to declare for Stannis if they meet his terms. He tells Davos to recover Rickon Stark from Skagos, as he wants a Stark in Winterfell. 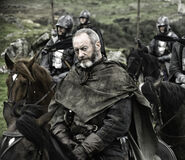 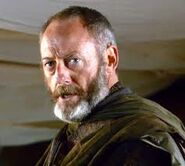