Teleportation
Levitation
Reading people's auras
Talk to animals
(all implied, but not confirmed)

Making friends and bonding with them.
Protecting the environment.
Reading people's auras.

Dawn, labeled The Moonchild, is a character in the Total Drama series. She appeared as a contestant on Total Drama: Revenge Of The Island, the show's fourth season.

She was voiced by Caitlynne Medrek.

Dawn makes her debut in "Bigger! Badder! Brutal-er!", on a yacht with the twelve other contestants, meditating on a railing next to B. She tells him the color of his aura is "exceptionally purplish-green" and that it suits him, which makes him smile. When Chris blows up the yacht, Dawn is the first person to make it to shore, somehow doing so without getting wet. This annoys Jo, who thought she was the first to make it to shore and was excited about it. Dawn tells her that she took a shortcut. She is later seen with Mike and Zoey on the beach. When Zoey says she always used to watch Total Drama, Dawn says that she knows Zoey is an only child because her soul reads "like an open book." Dawn is later placed on the Toxic Rats, arriving after Mike and Zoey in the race. She seems to levitate to the finish line, scaring Mike. During the challenge, when B signals his team to do something, Dawn directs the others, as he doesn't speak. When her team loses the challenge and Staci starts rambling again, she was the only member of the team who didn't outright glare at her angrily; she gave her a more confused, but still disapproving look instead. At the elimination ceremony, Dawn is given the fourth marshmallow.

In "Truth or Laser Shark", she starts the episode by hanging upside down in her cabin, while talking to a bird, clearly worried about whatever it is saying. When Dakota complains about losing her beauty sleep, Dawn replies by saying that her desire for fame is a depressed cry for love, surprising Dakota that she knows so much about her. In the first part of the challenge, Dawn explains to Chris how B's aura shows his non-talking abilities, and did not do much otherwise. Later, she does well on her portion of the obstacle course, by taking advice from the mutated rat. Despite this, her team ends up losing, and Dawn convinces them that Dakota must go, saying that a great darkness is around her. Dawn is given the second marshmallow of the night, and Dakota is eliminated.

In "Ice Ice Baby", Dawn calmly saves Lightning from choking on his food by performing the Heimlich maneuver. She then finds the beetle Lightning swallowed and pets it to sleep. In the first challenge, Dawn struggles with climbing the mountain, being unable to even reach the lowest rock. She then senses B has a plan and decides to help him. B's plan involved the junk pile that a mutant beetle was guarding and Dawn noted that it was angry. Eventually, Dawn realizes that it wanted to be with the smaller beetle she rescued that morning, she reunites them, allowing B to complete his invention and win the first part of the challenge. Dawn tried to help Scott during the capture the flag snowball fight, by telling him which snowballs he should use. Scott ignored her the first time, which led to the snowball exploding in his face. She then asks Scott if he was held enough when he was younger, clearly frightening him. She later compliments him when he convinces the mutant beetles not to attack the fort. Dawn then manipulates the two beetles into assisting in attacking the Maggots' fort, but her effort is futile due to Scott making B melt their fort to reveal Mike (as Vito) with their flag, losing the challenge for the Rats. She received the first marshmallow of the night and was safe from elimination. She was also sad when B was eliminated from the competition.

In the beginning of "Finders Creepers", Dawn is shown meditating in her cabin, when a firefly interrupts her, warning her that great evil is near. She takes this to be Chris, and is correct. Later, after Chris announces the challenge, Dawn and her team set out to find their first clue. After finding it in the base of a tree, Dawn reads the clue to determine where to go next. She identifies the next clue's location by the stars, and Scott deduces that they go northwest. Immediately afterwards, Dawn is taken by the "spider." The other Rats (aside from Sam) don't seem to care, and continue on without her. She is later shown in the spider's web, with the other captured contestants. She, along with the others were freed by Cameron, and her team wins the challenge due to Scott, and Sam.

In "Backstabbers Ahoy!", Dawn spends most of her time collecting various pieces of nature, and putting them in a massive garbage bag. She then encounters Brick on his early morning run, and tells him that he was teased a lot as a child, thus resulting in his need to be dominated. At breakfast that morning, she tells Lightning that his chi has been shrunken. Lightning quickly denies this and steals her breakfast. While the first part of the challenge was underway, Dawn went off to collect more items, mostly seashells, and encountered Zoey, heartbroken over her situation with Mike supposedly liking Anne Maria. Dawn comforted her by telling her that she wouldn't be lonely forever, and that Mike liked her a lot. Dawn briefly mentioned that this was seen in his aura, or "the Mike parts of it." Zoey turned to question Dawn about this last comment, but when she turned around, Dawn had vanished. Dawn, along with Brick and Sam, was selected to be the water-skiers during the second portion of the challenge. She was noticeably horrified at the mutated seagulls, and ordered Scott to not fire anymore seagulls after two had already been shot. Nevertheless, the final seagull was fired when Scott aimed it at Sam's back while he was driving the boat. This caused their team to lose, and Dawn accused Scott of sabotaging them. In the confessional, she declared Scott to be a traitor and vowed to expose his ways, unaware that he was eavesdropping on her from behind the outhouse.

When Scott handed Dawn her garbage bag before the elimination ceremony, he dropped it and it spilled open, revealing all of the contestants' missing possessions. Thus, everyone in camp believed that Dawn had stolen their possessions, even though it was Scott who stole them and decided to make a last-minute switch to incriminate Dawn instead of Brick. Thus, at the elimination ceremony that night, when it came down to the bottom two of Scott and Dawn, She was declared eliminated. Dawn frantically tried to save herself by revealing that she had found the Maclean-Brand Chris Head, only to find out that it was a fake carved by Scott. She then tried to warn her team about Scott, but Chef stuffed her into her own garbage bag and placed her in the Hurl of Shame, sending her flying off before she could warn them about Scott.

Dawn is mentioned by Scott in "Runaway Model", when he lies to Zoey and tells her that all his team members voted off Dawn behind his back, and that she was the only one who could save Lindsay from Sasquatchanakwa.

Dawn reappears in "Brain vs. Brawn: The Ultimate Showdown", where she supports Cameron to win the season. When the mutant animals begin to attack the cast, Dawn watches in horror as the Giant Tree Squid punches B repeatedly, causing her to question why her tea leaves couldn't predict the event would happen. She is later shown celebrating when Cameron wins the season, and leaves the island with the other contestants.

Dawn in her swimsuit. 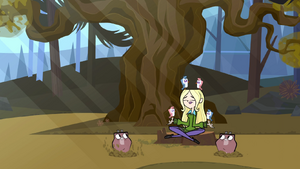 Dawn sitting with the animals in the opening sequence... 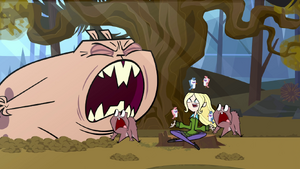 ...until a giant gopher appears. 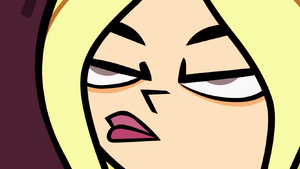 Dawn glares at Scott before she is eliminated. 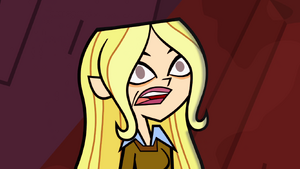 Dawn is shocked at her elimination... 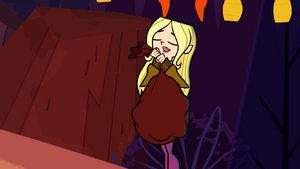 Dawn reveals what she needs the objects she collected for. 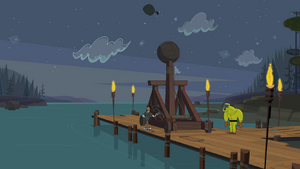 Dawn takes the Hurl of Shame. 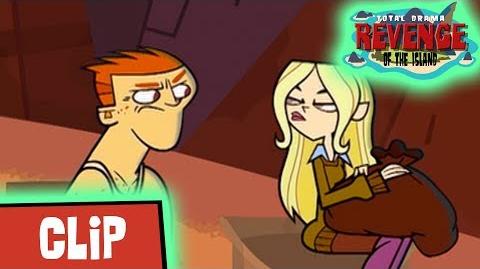 TOTAL DRAMA REVENGE OF THE ISLAND The Dawn of Scott (S4 Ep.5)