Jak and Daxter: The Precursor Legacy

Spending time with Jak and Tess

Find a cure for his form

Daxter is the deuteragonist of the Jak and Daxter video game series, and the main protagonist and playable character of the midquel game Daxter. He is Jak's best friend and sidekick who was transformed into an ottsel (otter/weasel hybrid) via contact with Dark Eco. Throughout the series, he viewed it as a curse, until he found out that the Precursors were ottsels, too. This effectively meant that Daxter had taken on the form of a god, which he relished immensely.

Before becoming an ottsel, Daxter appeared to be an ordinary, orange-haired, buck-toothed boy with red and white tunic with off-white trousers. He also appeared to be a few inches shorter than Jak. After the transformation, Daxter became a two-foot-ten-inch-tall rodent with orange fur and a yellow underbelly. He often made remarks about his claws, whiskers, and paws, typical to a rodent species.

Throughout the games Daxter makes various remarks about how he misses pants. In Jak 3, however, he is granted a pair of three-quarter length denim shorts with a small hole for his tail by the Ottsel Leader upon request after the Precursor granted him one wish.

Daxter also retains goggles and aviator's gloves throughout the entire series as a constant aesthetic.

Daxter is easily portrayed as the comedic relief of the series with his lame pick-up remarks towards women and witty but camp jokes, often using poor pickup lines and innuendos. He's very cocky and full of himself, and does not hesitate to crack a joke or call someone a name, or make light of a situation. In fact, his immature behavior has nearly gotten Daxter hurt (or worse) by various characters who frequently lose their temper at his immaturity.

Daxter, since becoming an Ottsel, is very sensitive about both his height and appearance and hates when people call him a rat or any other rodent sounding name. Theirs a running gag that Daxter especially hates not having any pants to wear and frequently blames Jak for his condition. However, after learning that the Ottsels are the legendary Precursors, Daxter was ecstatic to learn he is a Precursor and embraced who he is and even more after finally getting a pair of pants that fit him.

Daxter is well known for being a continuous flirt throughout the series, using lame pick-up lines on women (the main victim being Keira, Tess and Ashlen). Daxter has also dreamed about having several women around him and be the life of the party. After meeting Tess, who is attracted to Daxter finding him cute he begins to lessen his flirt like nature. After Tess is turned into an Ottsel, Daxter is ecstatic and demonstrates himself to be both committed and serious in his relationship with her and no longer flirts with any other women in the series.

Daxter is frequently shown to be a coward throughout the series, usually hesitant to risk his life (or tail) to save others or leap into life threatening situation unlike Jak. He typically tries to deny any fear and frequently make excuses rather than actually put some effort and would rather take the easy way out. However, for all his cowardliness, Daxter is not a complete coward, and attempts to paint himself in the hero's light, exaggerating stories to make him out to be the "real" hero, with Jak merely as a sidekick, though when faced with danger aptly backs away.

Albeit, Daxter has shown some heroic and loyal traits, sending after Veger when he taunted Jak about his childhood and early separation from Damas, his father. Daxter also stayed behind with Jak when he was banished to the Wasteland, and also went on a two-year-long journey to free his friend from prison. Additionally, after being doused with dark eco for a second time, Dark Daxter appears to be braver and reckless, being a self-proclaimed "top-of-the-food-chain" predator.

The one positive thing about Daxter's personality if anything is that he is a fiercely loyal friend. As with Jak, his best friend and like a brother to him, Daxter has been by his side since the beginning. After Jak was captured, Daxter risked his life (and tail) to save him and refused to abandon Jak when the latter was banished to the Wasteland despite the two nearly dying from dehydration. Daxter himself even admits he enjoys riding on Jak's shoulders when they go on an adventure.

Daxter in his human form. 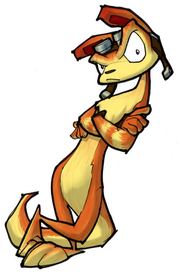 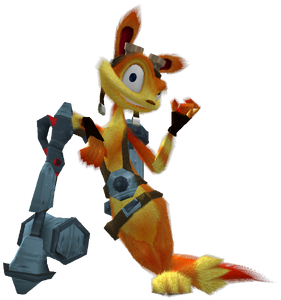 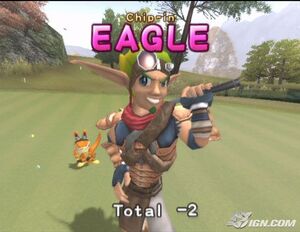