Dazzler (real name Alison Blaire) is a fictional character and superheroine in Marvel comics and universe, and is associated with the X-Men. Her mutant powers allow her transduce sonic vibrations via light, and has been a member of the X-Men, Excalibur, S.H.I.E.L.D. and A-Force.

She was created by John Romita Jr. and Tom DeFalco, and first appeared in Uncanny X-Men #130 in February of 1980.

A mutant with the ability to convert sound vibrations into light and energy beams, Dazzler was originally developed as a cross-promotional, multi-media creation between Casablanca Records and Marvel Comics until the tie-ins were dropped in 1980. Despite the fact that Dazzler was originally commissioned as a disco singer, the character shifted to other musical genres, including rock and adult contemporary.

She starred in a self-titled solo series in the early 1980s which lasted 42 issues, a Marvel Graphic Novel titled Dazzler: The Movie, a four-issue limited series co-starring The Beast titled Beauty and the Beast, and later joined the cast of the X-Men. She was briefly a member of the spin-off group Excalibur but has since re-joined the X-Men.

Alison Blaire was born in Gardendale, Long Island, New York to law student Carter Blaire, and entertainer Katherine Blaire. Her parents' relationship was tense, and Katherine eventually walked out on Carter while Alison was young, leaving her to be raised by her father and grandmother. While growing up, Alison developed dreams of becoming a singer, but her father didn't like the idea, and forced to choose a path similar to his. Alison became an academic star during her youth, and was encouraged by her grandmother to explore outside of law school.

While performing at a junior high school, Alison's powers manifested, causing her blind all in attendance excluding herself. Alison kept her powers a secret, causing her relationship with her father to become strained. During her time in college, Alison decided to explore her powers and music ability, and created the persona of "Dazzler", and abandoned her father's dream. At the graduation ceremony, Alison informed her father that she wasn't going to follow his dream of becoming a lawyer, and that she would work on her singing career without his support.

Dazzler used her powers to draw her performances, which caught the attention of both the X-Men and the Hellfire Club. Once discovering her, both groups wanted to recruit her into their team, but the X-Men succeeded in helping her defeat the Hellfire Knights. Despite being offered a position in the X-Men, Dazzler declined to join, choosing to focus on her singing career. Dazzler became a target for numerous people, once being possessed by the Lightmaster, but she was saved by Spider-Man. In addition, Dazzler became popular in both the club and superhero circuit, and became associated with the Human Torch. 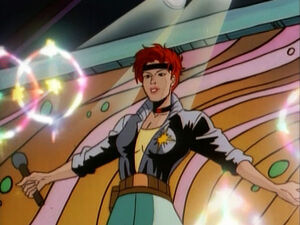 Dazzler in the X-Men animated series. 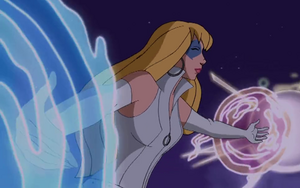 Dazzler in Wolverine and the X-Men. 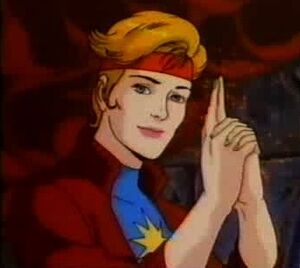 Dazzler in Pryde of the X-Men. 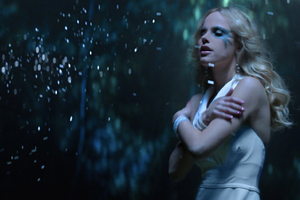