pranking & humiliating Seth Rollins, helping those who are against "The Authority"

Anti-Heroic Trickster
Jonathan Good (born December 7, 1985) is an American professional wrestler currently signed to WWE under the ring name of Dean Ambrose. He's now one of the secondary protagonists on the show. In his childhood, he was a big fan of pro wrestler Bret "Hitman" Hart. He was born and raised in Cincinnati, Ohio, and pretty much of his character in the business is based on his real-life persona.

He has been in numerous pro wrestling promotions such as HWA, CZW, a few times in ROH, DGUSA and more. He is known as Jon Moxley in the mentioned promotions. He was started being called as Dean Ambrose in WWE's developmental territory FCW now known as WWE NXT.

Much of the character of Dean Ambrose is based on Jonathan Good's real life persona. Dean Ambrose's character type would be classified as a Lunatic. Dean's goals are to raise hell on any person who crosses paths with (ex. Seth Rollins, Bray Wyatt, Kane, Triple H, etc.) Dean is also described to be verbally arrogant and was called the "Mouthpiece of the Shield" in 2013. Dean is considered to be an anti-hero, much like WWE Hall of Famer and Legend Stone Cold Steve Austin.

Face Turn of the Shield

In March, The Shield began a feud with Kane, turning them into fan favorite characters, and resulting in The Shield defeating Kane and The New Age Outlaws at WrestleMania XXX. The Shield next turned on Triple H, who reformed Evolution with Batista and Randy Orton to take on The Shield. On the May 2 episode of SmackDown, Ambrose retained his title in a four-way match againstAlberto Del Rio, Curtis Axel, and Ryback. As part of their feud with Evolution, The Shield won a six-man tag team match at Extreme Rules. The following night on Raw, Triple H forced Ambrose to defend his championship in a 20-man battle royal with Rollins and Reigns not part of the match; Ambrose survived until the final two but lost to Sheamus, ending Ambrose's record title reign at 351 days. On the next SmackDown, Ambrose failed to regain the championship in a singles match against Sheamus.

The Shield once again defeated Evolution at Payback, prompting Triple H to initiate "Plan B". The Plan involved Rollins turning on Ambrose and Reigns, subsequently aligning himself with Triple H.

Break up of the shield and rivarly with seth rollins

Ambrose was scheduled to face Rollins at Battleground, but he was ejected from the arena by Triple H for fighting with Rollins backstage, and Rollins subsequently announced that he had won their match by forfeit, forcing Ambrose to return to the arena and attack Rollins. Ambrose and Rollins eventually wrestled their second PPV match at SummerSlam in a lumberjack match, which Ambrose lost with assistance from Kane. Ambrose attacked Rollins again the following night, causing them to face off in a Falls Count Anywhere match, which Rollins won by knockout when Ambrose was attacked by Kane and subsequently had his head driven through a pile of cinderblocks by Rollins. Ambrose was stretchered out of the arena.

The next few weeks saw Ambrose and Wyatt taunting and attacking each other in both backstage and in-ring segments, with Wyatt claiming that he could "fix" Ambrose, leading to a match at Survivor Series. Ambrose lost the match by disqualification after utilizing steel chairs, including a table. This led to a Tables, Ladders, and Chairs match between the two at TLC: Tables, Ladders and Chairs in December. During the match, a television monitor blew up in Ambrose's face, allowing Wyatt to win the match. The feud concluded when Wyatt beat Ambrose in the first Ambulance match held on Raw, In which ambrose lost.

On the January 19 episode of Raw, Ambrose defeated Intercontinental Champion Bad News Barrett. At the Royal Rumble, Ambrose participated in the Royal Rumble match, but was eliminated by Kane and Big Show. The following weeks, Ambrose demanded a match for Barrett's title, which Barrett declined, leading to Ambrose attacking him, tying his hands around the ring post, and forcing him to sign a contract for a title match at Fastlane, where Ambrose lost the subsequent match by disqualification, but stole the championship belt afterward.

At WrestleMania 31, Ambrose participated in a seven-man ladder match for the championship, but lost after Luke Harper powerbombed him through a ladder and knocked him out of the match as result. On the April 2 episode of SmackDown, Ambrose fought Harper to a no contest after Harper put Ambrose through a table. On the April 13 episode of Raw, Ambrose attacked Harper after Harper lost to Ryback by disqualification. On the April 20 episode of Raw, Ambrose and Harper once again fought to a no-contest. At Extreme Rules, Ambrose defeated Harper in his first singles victory on pay-per-view since the Shield split up.

On the May 4 episode of Raw, Ambrose defeated the WWE World Heavyweight Champion (and former rival and Shield stablemate) Seth Rollins, and as per pre-stipulation by Kane, Ambrose was added to the WWE World Heavyweight Championship match at Payback, a fatal four-way match also including Randy Orton and Roman Reigns, and Ambrose's first opportunity for a WWE's world title. However, at the event, Ambrose failed to win the title. He also failed at Elimination Chamber as, while he won a singles championship match against Rollins, it was via disqualification, thus Rollins retained once more.Despite the loss, Ambrose took the belt with him and challenged Rollins in a ladder match at Money in the Bank which he lost.

After Money in the Bank, Ambrose continued teaming with Reigns, and eventually helped him in his feud with Bray Wyatt after Luke Harper reunited with Wyatt. On the August 6 edition of SmackDown, Reigns challenged Wyatt to a tag team match at SummerSlam, with Reigns and Ambrose facing Wyatt and Harper, which Wyatt accepted. At SummerSlam, Ambrose and Reigns defeated Wyatt and Harper. On the August 24 episode of Raw, Ambrose and Reigns fought Wyatt and Harper in a SummerSlam rematch. During the match, Braun Strowman made his WWE debut, joining The Wyatt Family and helping Harper and Wyatt attack Ambrose and Reigns. At Night of Champions, Ambrose, Reigns and Jericho were defeated by Wyatt, Harper and Strowman in a six-man tag team match.

Following Seth Rollins' injury, which forced him to vacate the WWE World Heavyweight Championship in November 2015, Ambrose entered a 16-man tournament to determine a new champion. After defeating Tyler Breeze, Dolph Ziggler and Kevin Owens, Ambrose ultimately made it to the finals at Survivor Series, losing in a singles match to Roman Reigns.

After becoming the number 1 contender for the intercontinenetal title, ambrose started a rivarly with kevin owens, ambrose became the IC champion for the first time defeating owens in the TLC PPV. In in the chrismas special episode of smackdown, ambrose succeded in his first title defense by defating dolph zigggler and kevin owens in a triple threat match.

At the royal rumble PPV, ambrose defeated owens to retain the title in a last man standing, and participated in the royal rumble match and was the runner up after getting eliminated by triple h.the next nightto fight brock lesnar and roman reigns in the fastlane PPV for the right to face triple h for the wwe championship. On february 15 episode of raw, ambrose fought in a fatal 5 way match for th IC title,In which he lost when kevin owens pinned tyler breeze.

At the fastlane PPV, Ambrose lost the match when he was pinned by roman reigns. The following night, ambrose attacked brock lesnar and and challenged him in a no hold barred match at Wrestlemania 32, on february 29 episode of RAW, ambrose demanded a match for the WWE championship, and it would take place at the roadblock PPV, In which ambrose lost after a conerversial finish.

On March 14 episode of RAW, Mick foley "passed the torch to ambrose" by giving him his signature weapon the Barberd wire, The next week, wwe Hall of famer Terry Funk gave ambrose a chainsaw, In the end ambrose lost the match after getting suplexed numerous times.

When shane mcmahon replaced Chris jericho's Highlight Reel and replaced it with The Ambrose Asylum, A feud Began Between Chris Jericho and Dean ambrose, and They fight in the PAYBACK PPV, in which jericho lost aganist Ambrose.

The following night Ambrose Invited stephanie mcmahon to the Ambrose asylum, after a small talk between them, she decided to cancel The Ambrose Asylum and Replace it with the Highlight Reel. Ambrose then was attacked by chris jericho In which their fight would end when smashed Ambrose's Head by "Mitch" the potted plant, Ambrose then demanded an asylum match (A steel cage with weapons hanging above the cage) at the Extreme Rules PPV, In which he won After Hitting the Dirty Deeds on Jericho on a bed of thumbtacks.

On the May 23 episode of Raw, Ambrose qualified for the Money in the Bank Match by Defeating Dolph Ziggler, and At the PPV won The match, When Seth rollins Defeated Roman reigns, Ambrose came in and cashed in his MoneyIn the Bank Contract and Defeated Rollins quickly to become the WWE Champion For the first time in his career.

After the number one contender's match between Rollins and Reigns ended in a double countout the next night on Raw, Shane McMahon, announced a triple threat match for the title between Ambrose, Reigns, and Rollins at Battleground. In July, Ambrose successfully defended the title in two singles match against Rollins on both Raw and SmackDown before Battleground.

On July 19 at the 2016 WWE draft, Ambrose was drafted to SmackDown, being the brand's first draft pick and bringing the championship with him. At Battleground on July 24, Ambrose successfully retained his title against Rollins and Reigns by pinning Roman reigns Ambrose was scheduled to defend the WWE World Championship, which was now exclusive to SmackDown, against Dolph Ziggler at SummerSlam. When Ziggler won a fatal 5 way match in Smackdown. 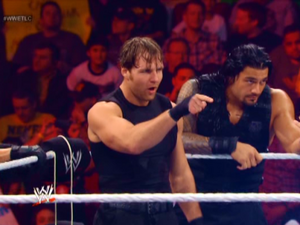 Retrieved from "https://hero.fandom.com/wiki/Dean_Ambrose?oldid=1699536"
Community content is available under CC-BY-SA unless otherwise noted.