Dean McCoppin is an artistic beatnik and junkman in the 1999 animated science fiction film The Iron Giant. Dean becomes a good friend and father-like figure to Hogarth Hughes and gives the Giant a home and food while Hogarth is away. He appears to begin a relationship with Annie Hughes and possibly becomes Hogarth's stepfather at the end of the film.

He is voiced by Harry Connick, Jr., and by Kazuhiko Inoue in the Japanese version, who played Kakashi Hatake from Naruto.

Dean's first appearance is while Hogarth is visiting his mother at the Chat n' Chew Diner. Likely exhausted from working late on his art, Hogarth finds Dean asleep behind his paper, while searching for his "pet" squirrel.

Quickly composing himself after being awoken by Hogarth's actions, Hogarth informs him that his "pet" squirrel is under his table and pleads that he does not cause a commotion and alarm his mother.

Before they can really continue taking, the two are suddenly, interrupted by some fisherman having a conversation at table across from them. While the other men laugh at a particular fisherman who claims to have seen an object from space, Dean claims he saw it too.

When pried by an excited Hogarth, Dean confess that he did not actually see anything and was simply supporting the "kook" since no one else would. The two are interrupted however, when Annie inquires if his son is bothering him.

Rather oddly, Dean erratically declares "yes" before affirming "no" and tells Annie to call him Dean. Leaving Hogarth with Dean, he awkwardly informs Hogarth that he's found his pet: in his pant leg.

Although he tries to remain calm for Hogarth, the discomfort and the fact that its "heading north" causes him to apologize to everyone in the restaurant before unzipping his fly, releasing the squirrel in to the diner.

As the chaos ensues, Dean nervously asks for his check and Hogarth presumably leaves.

The following morning, after Hogarth discovers the Giant at the power station, Dean returns to the Chat n' Chew. As Annie serves him some coffee, she express her fears that Hogarth is lonely which resulted in the squirrel incident the last time Dean was present.

Dean assures her that he's a good kid, but his attention is quickly pulled away by Earl who arrives to show Dean something outside. Outside, Dean begins to take a heavily damaged tractor from an elderly farmer, as Earl watches.

Hoisting the vehicle onto the back of his truck, Dean apologize that he cannot pay more for the vehicle as a result of the bite-like mark in its engine compartment. Dean ponders on what could have possibly caused the bizarre damage, before Earl reminds him of his story from the day before.

Rather disbelieving, Dean shrugs off the idea of "strange invaders", as Earl thanks him for sticking up for him the day before. He assures Dean that he has since called the government and trusts that they will solve the entire problem.

Dean finds this rather comical, however and calls Earl crazy as he cannot imagine who the government would possibly send for such a ridiculous and unlikely sort of case.

Dean takes the old car to the scrapyard and takes to the McCoppin Scrapyard while the Giant and Hogarth are hiding while finding some food.

After Hogarth allowed the Giant to find some food, Dean sees Hogarth again and gives him coffee as Hogarth becomes excited and his story that he tells Dean. Dean discovers the Giant which he and Hogarth try to run, but the Giant tries to hurt him, but Hogarth tells him not to do it and Dean is a friend.

Dean tells Hogarth that the Giant is staying at the Junkyard for now before Hogarth leaves. Hogarth returns to the Junkyard to see Dean and the Giant as the Giant begins to have fun with Hogarth such as playing blast off to the moon.

Dean takes Hogarth and the Giant to the lake where the Giant makes giant splash which washes Dean away and Dean declares that is just enough fun for one day.

That night, while Dean is asleep on his chair while he is watching a late night television show, the Giant is dreaming about encountering the deer and hallucinating about the power station incident which fades to an army of giant robots that look identical to the Giant destroying a planet as Dean wakes up and sees the Giant's dream on his TV screen, but the Giant wakes up and Dean sees what is going on outside as the Giant goes back to sleep and Dean wonders if the Giant is okay.

As Hogarth, Annie, Kent, General Rogard and the army arrive at the junkyard, Kent asks Dean, "Where is the giant metal man?" Dean shows them the Giant disguised as a giant metal statue of art which leads to Rogard berating Kent for wasting millions of dollars over a stupid investigation and dismissing him from the government.

Annie becomes impressed and becomes interested, possibly romantically, in Dean and Dean seems attracted to her before she leaves and the army leave.

Then, Dean tells the Giant that the coast is clear and Hogarth pretends to fight the Giant, who he's telling to be the Atomo from his comics, but the Giant wants to be Superman, one of Hogarth's favorite heroes, not Atomo.

The toy gun that Hogarth points at the Giant sets off an automatic defense mechanism which causes the Giant fires an attack at Hogarth that Hogarth avoids by pure luck after his toy gun malfunctions and he crouches down to try and fix it.

Upon seeing the toy gun, Dean realizes that the Giant was being defensive by reacting to the gun and Dean decides to help Hogarth find the Giant by using his motorcycle.

After the Giant proves that he is not a gun, the Army begins to fire and the Giant and Hogarth flee.

As the missile is about to be launched, Dean and Annie tell the General that the Giant never killed Hogarth or anyone as Kent tells the General to launch the missile and Dean also tells him to end this right now.

The General discovers that Hogarth is still alive and tells his men to stand down and abort the missile launch, but Kent snatches the Walkie Talkie to launch the missile.

As Dean touch Hogarth's hair, Annie ask him to get to a shelter for safety, but he said it would not matter. The Giant decides to sacrifice himself in order to save Dean, Hogarth, Annie and Rockwell as everybody and Rockwell is saved.

Seven months later in May 1958, Dean and Annie are presumably a couple (possibly even married), based on the way Annie refers to Dean as "honey," and are admiring a statue that Dean constructed to honor the Iron Giant.

Dean also gives a screw to Hogarth, explaining to him that the General said it was the only part of the Giant they could find and felt that Hogarth should have it. 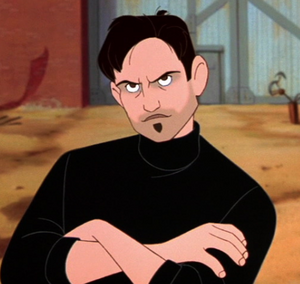