Protector of the Balance

Leader of the Horseman of the Apocalypse

Being Sarcastic.
Riding his horse Despair.

Death is a major protagonist of the Darksiders series, and the main protagonist of Darksiders 2. He is the eldest and most powerful of the surviving Nephilim, and is the leader of the Four Horsemen of The Apocalypse. Nearly as unstoppable as his namesake, Death is feared across the universe, but despite this, is an honorable and sometimes even fully benevolent soul.

Death is one of the Nephilim, an exceptionally powerful race born from the essence of both Angels and Demons. A brutal and warmongering species, they ravaged and destroyed everything in their path, a crusade lead by their first, Absalom. Hundreds of realms fell to their bloodlust, but as the carnage continued, Death and his 3 closest siblings, grew to disapprove of the chaos. Their destructive rampage lead them to the realm of Eden, the original Paradise for Humanity. Death, Fury, Strife and War, chose to instead fight back against their kin. Striking a deal with the Charred Council, they would preserve the balance of the universe and serve the will of the Council, in exchange for unfathomable power. Come the battle of Eden, The Four stood with the Angels and the Nephilim were exterminated. From this moment onward, Death donned his mask, and would not remove it for eons.

Death can appear as a very cold and intensely driven character. He has no time for silliness, games, and is exceptionally to the point with brutal efficiency. He will do anything he has to in order to achieve his goals, and it is this monstrous dedication and his unstoppable might that makes Death feared by all. Death is one of the very best at what he does, and he thoroughly enjoys it, being right at home in the middle of bloodshed and violence. He can also be quite uncaring and merciless to his foes, and is very arrogant, however, this is justified as he is one of the most powerful warriors in all of creation. Sarcastic with an incredibly dry sense of humor, Death even enjoys killing lesser foes for the sheer fun of it, seen when he chuckles gladly when killing the lowest of vermin. Coupled with his arrogance, Death can also be quite sassy, amusing given who he is.

However, for a very select few, his siblings, Death cares deeply for them, and will go to any extreme to protect them, as seen when he sacrificed himself and all other damned Nephilim souls to save War. Death's loyalty, more than to the Charred Council, is to the Four Horsemen. That being said, like a any older sibling, he does not hesitate to reprimand or discipline them, even to such extremes as to sever War's arm to teach him a lesson.

Despite all of his coldness though, Death will not willingly harm an innocent if there is no purpose, and even defends those who cannot defend themselves. When a group of humans who took shelter in a church on the ruined Earth were besieged by Demons, Death came to their aid, giving those frightened within a look before immediately turning to slay the foes outside. 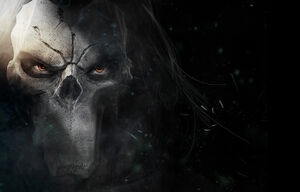 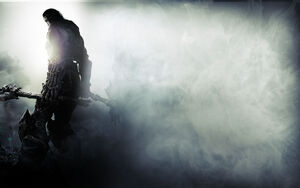 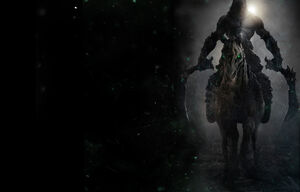 Death and his horse, Despair. 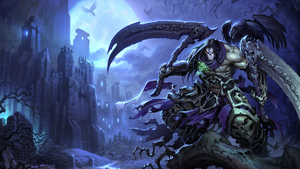 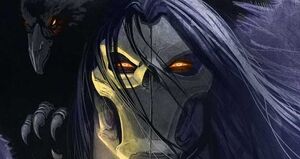 Artwork of Death with his raven, Dust. 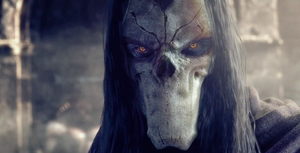 Death in the live-action trailer. 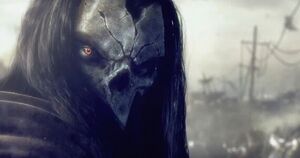 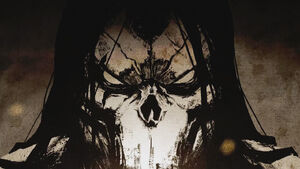