The Grim Reaper
The Reaper

Death, is a fictional character in Terry Pratchett's Discworld series. Discworld's Death is a parody of several other personifications of death. Like most Grim Reapers, he is a black-robed skeleton (usually- he wears the Dean's "Born to Rune" leather jacket in Soul Music, and overalls in Reaper Man) carrying a scythe and, for royalty, a sword (he once told Mort). Unlike many of them, he has a personality beyond this. He is a 'anthropomorphisised personification of a natural process'/a God of the disk world and sometimes has his duties carried out by his appretice Mort, or Death's granddaughter Susan.

Death is one of the most popular Discworld characters. His steed is a great pale horse called Binky who is very much still alive (in Reaper Man it is remarked that he tried riding a steed of flames and a skeletal one, but the former was constantly setting the stable on fire, and he got rid of the latter because he grew tired of "constantly getting off to wire bits back on"). His hollow, peculiar voice is represented in the books unquoted ; it is peculiar because since he is a tall skeleton, he has no vocal cords to speak with, and therefore the words enter your head with no involvement from your ears, the books get this across by having his "speech" in small caps. In The Colour of Magic (the first Discworld novel), and in Eric, all direct written references to Death are proper nouns, thus, for example, "he" is written as "He". This is usually reserved for the Discworld gods and is not featured in any of the other novels.

Death is not invisible. Most people just refuse to acknowledge him for who he is, unless he insists. Under normal circumstances, only those of a magical disposition (e.g. witches and wizards), children and cats can see him, or allow themselves to see him. In Wyrd Sisters Death briefly took the place of an actor playing him in a play and was shocked to discover when he walked onto the stage that all of the audience could see him as they were expecting Death to appear; it was stated that he was quite nervous at this as he is usually seen only by one person at a time and was not comfortable with so many people watching him. Death can of course ignore things like walls or magic spells that stand between him and his object: this is because he's much "realer" than they are. A castle might stand for centuries, but Death has existed for billions of years: to him, the walls of the castle are less substantial than a cobweb. However, he can only go where people believe in death, as shown inHogfather, and can only see people who can die, as shown in Thief of Time.

It is also mentioned in The Colour of Magic that wizards, witches, and significant figures (e.g. kings) have the "privilege" of being collected by Death himself upon their death, rather than one of the lesser entities. Indeed, wizards and witches have prior knowledge of the time of their deaths and expect Death to keep to schedule. Most other deaths are collected by another functionary, but with the exception of Mort and Susan (both acting as "authorized" replacements for Death), there has only been one "collection" described in the books by anyone other than Death, attempted of Rincewind by the anthropomorphic personification of Scrofula. However, Death himself must collect some souls in order to keep the momentum of death going, worked out by a system described as the 'nodes'. These nodes seem handily to be most of the characters who die in the course of the novels, as Death almost invariably turns up whenever any character dies, sometimes (especially when taking bad characters' lives) replaced by the Death of Rats, mentioned below in this article. As well as wizards and kings, he has shown up for numerous ordinary people, at least two dogs, a swan, and once for a tube worm (he used a one inch long scythe on it). He was present at the beginning and end of Time in one novel. He has also appeared even in situations where characters might potentially die. These events are usually of importance within the story, so Death's appearance may simply be considered a plot device. Death mentions in Guards! Guards! that he does personally collect the souls of ordinary people. This suggests that Death's conception of an important person is not, necessarily, the same as a human conception. Possibly he is able to judge "significant" deaths based on an understanding of the broad sweep of history andchaos theory. He may also do ordinary deaths judging by the showyness of the death (such as a beggar being incinerated by a dragon, the first dragon-based death in centuries). 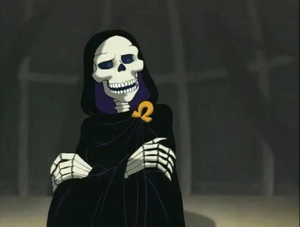 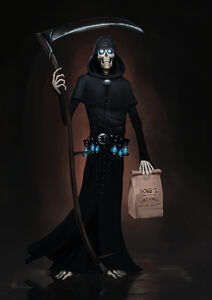 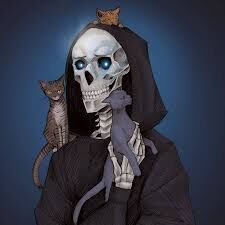