No information
Debbie is the main character of Speed Buggy. She is a friend of Speed Buggy, Tinker, and Mark. Additionally, she is the leader of the group despite being the only female.

She is voiced by Arlene Golonka.

Debbie has long brown hair. She wears a light blue pit-crew shirt with a darker blue collar and a vertical stripe on the right side, with white slacks.

Debbie is generally a good natured girl, who cares deeply about her friends. She tries to help her group with certain situations that the boys have difficulty dealing with. As the leader of her group, the boys think of her as a glue of the team, that keep them together; otherwise, without her, the team would fall apart.

She has auto-mechanic skills and assisted Tinker in building Speed Buggy.

She appeared as one of the Guess Stars, That The Mystery Inc. Gang Encountered. Alongside her other friends Tinker, Mark and Speed Buggy. 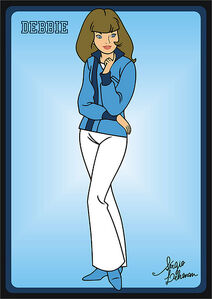