Goof Troop, "Leader of the Pack"

Hanging out with her cousin and his best friend

To help her cousin Max and P.J defeat Duke (succeeded)

Debbie is a character from the television show Goof Troop. She is the niece of Goofy and the cousin of Max. She only made one appearance in the episode called, "Leader of the Pack".

She is Max's ex-babysitter who Max didn't like because of the incident with the baby powder. However, after revealing her good heart to her cousin and his best friend, she ultimately helps them beat Duke. Since then, they have had a good relationship together.

She was voiced by Kath Soucie.

In the past, Debbie was Max's babysitter when she was younger. Max, who was a baby at the time thought that she tried to kill him with baby power when she changed his diaper. Max grew up disliking her because of what happened with the baby power.

Max said that she would choke him with baby powder "every chance she got"; but really, it seemed she was just being careless. In truth, she is kind-hearted, mature, and loving towards her cousin.

Her beauty attracted Duke so much that he wanted her to be his girlfriend. She used this trait to trick him into embarassing himself and later, compete in a race.

Debbie, like almost all Goof Troop characters, is an anthropomorphic dog. She has short, red hair with light skin and a well-in-shape body.

Her attire consists of a blue jacket, an orange shirt underneath, a pair of button-up jeans and red laced shoes that come up to her shins.

In the current time of the "Leader of the Pack" episode, Debbie speaks to Goofy over the phone and talks about visiting him and Max. When Max hears this, he isn't thrilled and tells his friend P.J. that she's a dweeb. P.J. doesn't believe him until Max shows him a photo of her. A flashback is shown as Max tells P.J. the story of what he believes happened to him when he was a baby.

Because Max hasn't seen his cousin in years when Debbie drives up to the house, Max and P.J. are surprised about how much she has changed. The two decide to ask Debbie to help them with a bully named Duke. Because no one knew that Debbie was Max's cousin, they decided to act like she was his girlfriend so they could get into Burger Behemoth. The plan worked, but Duke, leader The Pharaohs, got jealous seeing her with Max when he fell for the trick and tried to get Debbie to fall in love with him.

Though Duke was unsuccessful in the attempt to get Debbie as his girlfriend, he didn't give up. Debbie then tricked Duke into having a skateboarding race with Max (who had the advantage), and Max won. With the help of Debbie, Max and P.J. were finally able to get into Burger Behemoth. After losing the race and being humiliated, they asked to be let back in. Max, P.J. and Debbie told them that they weren't allowed. Duke and The Pharaohs believed them, but then Max told them they were just kidding and lets them in.

After that, they all get to eat some burgers with no more trouble from Duke and his gang.

Debbie hadn't seen her cousin in years and was surprised to see how much he grew up just as he was surprised to see how much she changed. She loved her cousin so much she was willing to help him in his plan to get into Burger Behemoth. When she overhears P.J. mentioning the baby powder incident, she asked Max if he was telling everybody that she was choking him with it. She also told him she knew how he felt.

Goofy is Debbie's uncle. She spoke to him on the phone. 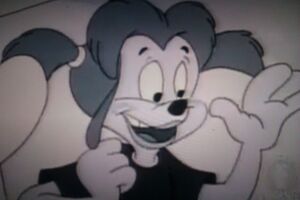 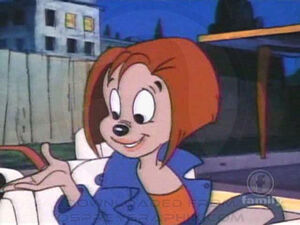 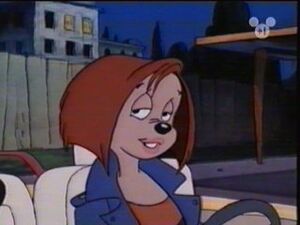 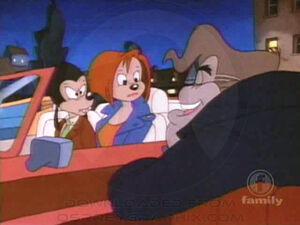 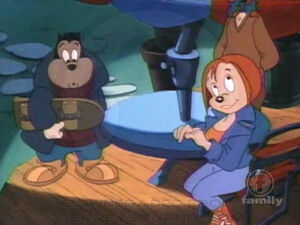 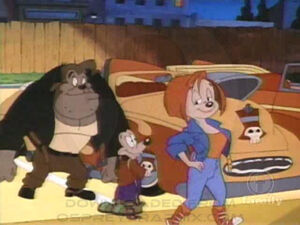 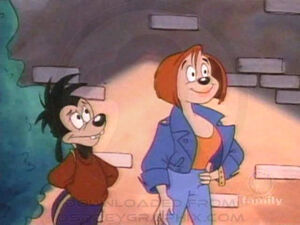 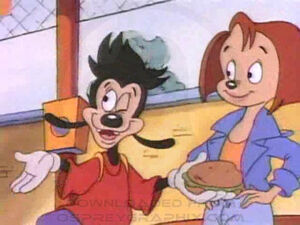 Add a photo to this gallery
Retrieved from "https://hero.fandom.com/wiki/Debbie_(Goof_Troop)?oldid=1744852"
Community content is available under CC-BY-SA unless otherwise noted.