The mother of Michael Myers, Judith and Angel Myers and exotic dancer

working as an exotic dancer at the Rabbit in Red Lounge

Trying to help his son to be a good boy (Failed after she found the truth about her son)
Make her son bring Laurie to come back home (Halloween II; possibly succeeded)

Deborah Myers is a supporting character featured in the 2007 remake of Halloween directed by Rob Zombie.

She was played by Sheri Moon Zombie and appeared as an hallucination and/or dream in the 2009 sequel film, Halloween II.

Deborah Myers was the mother of Judith, Michael and Angel. She lived in a house in Haddonfield, Illinois with her boyfriend Ronnie White.

Deborah earned money as an exotic dancer working at the Rabbit in Red Lounge, and she had an unhealthy relationship with Ronnie, who constantly yelled at her and threatened to beat her up.

On the morning of October 31, Deborah prepared breakfast for her family, but this only led to another classic argument between Ronnie and her.

Judith did not wish to stay for breakfast, Michael would not remove his Halloween mask while at the breakfast table and baby Angel kept crying. Ronnie had an outburst and threw all of the breakfast plates onto the floor.

Irritated that she had to leave work, she went to the school where Chambers indicated that Michael had been involved in a fight.

Further, he showed her a dead cat that Michael had shoved into his school bag as well as a stack of photographs of dead animals in various states of mutilation.

Then, Chambers called in child psychologist Doctor Sam Loomis to have a private consultation with Deborah.

Although Loomis tried to tell her that the business with the animals was an early warning sign of deeper problems, Deborah refused to entertain the notion that anything was wrong with her son.

Later that evening, Deborah found out how correct Loomis actually was. Returning from work, she found Michael sitting on the sidewalk outside their home holding his baby sister in his arms.

The baby was fine, but there was blood smeared all over his hands and his Halloween costume.

Then, Deborah discovered moments later that Michael had slaughtered Judith, Ronnie White and Judith's boyfriend Steve Haley. The child was arrested and remanded to the care of Smith's Grove Sanitarium.

Deborah visited Michael once a week, but Michael became more and more withdrawn and retreated behind the masks that he would design for himself while incarcerated.

As months passed, Deborah tried her best to reach him, but eventually, she began to feel that there was no hope for Michael.

On Christmas visit, she brings him a toy white horse where Michael tells her of a dream he had where she was dressed in all white and was walking down a white hallway with a white horse, telling him that she would take him home.

Then, she replied that she wished to take him home and missed him every day which Michael replied that he would miss his mother too. Then, she asked him if he was ticklish and Michael said no.

Then, she finally tickled Michael and he laughed and smiled. This was the first time we see Michael laugh or smile during his incarceration and the whole Halloween franchise. Deborah told him that's the smile she wanted to see and also told him to cheer up.

On her last visit, she gave him an old photograph of himself and Angel, suggesting that he might want to hang it up in his room.

After the visit, Doctor Loomis walked Deborah out to her car, leaving Michael in the care of a woman named Nurse Wynn.

Then, Michael snapped: he picked up a fork and stabbed Nurse Wynn to death because she said that he could not be related to the baby.

Then, Loomis and Deborah ran back into the room which Deborah finally saw Michael's true colors: a psychotic monster.

Everything that she had ever cared for was either gone or irrevocably destroyed by her poor choices and lifestyle.

Unable to deal with the depression and guilt any longer, Deborah took her own life with a handgun and killed herself while her baby girl Angel cried.

Years later, it is shown that Michael and later Laurie have visions of their mother and the horse. 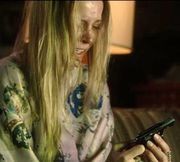 Deborah's reaction to the death of her daughter, Ronnie and Steve

Deb in Halloween 2
Add a photo to this gallery

Retrieved from "https://hero.fandom.com/wiki/Deborah_Myers?oldid=2037110"
Community content is available under CC-BY-SA unless otherwise noted.