Depends on the situation

Dee Dee is the deuteragonist of Dexter's Laboratory. She is Dexter's extremely ditzy and simple-minded big sister. Dexter often finds her very annoying, to the point he deems her as a 'stupid sister'.

She is voiced by Allison Moore and Kat Cressida.

She is two to three times taller than Dexter and has peculiar body proportions; a minuscule torso with a large head and gangly limbs, similar to a ballerina's. To complete the ballet look, she wears a rose/brink pink colored small tutu, white pantyhose and pink ballet pumps, which usually create a "squishy" noise while walking. She has a similar personality and hair color to her father. For sleeping she wears a pink nightgown, and she wears her hair down. For swimming she wears a pink one-piece swimsuit and a pink swimming cap with the initial 'D' on the front. She has fair skin, blue eyes and long blonde hair in pigtails.

DeeDee usually, in one way or another, sabotages Dexter's experiments and destroys the lab in nearly every episode of the show in which she appears (one episode even hints that she may be doing so on purpose) out of sheer curiosity rather than malicious intent, even though she seems to show care or love for her brother. DeeDee also loves ballet, puppies, unicorns, messing around in Dexter's laboratory, and generally depicts all the stereotypes concerning normal girl activities.

Nonetheless, DeeDee is shown to have a good heart, one that seems infinitely purer than even her own brother's despite being extremely ditzy and simple-minded. She is kind and compassionate to nearly everyone she meets, is very social and outgoing, and rarely has a bad word to say about anyone. Because of this, it is shown on the show that nearly everybody likes her. Being so well-liked, however, does seem to give her a highly inflated opinion of herself. One example is how, in her told-on-the-spot fairytale "DeeDee-Locks and the Ness Monster," she puts a Dutch version of herself in the protagonist's role and calls herself a young girl that "everybody loved." All the same, she is good-natured and very trustworthy to others.

While DeeDee lacks Dexter's skills in technology and science, she has shown to possess a powerful imagination that can even bring imaginary creatures to life, and she can even travel to the imaginary world of Koosland and interact with imaginary creatures such as the Koosalagoopagoop. In seasons 3 and 4, she is also made the creator of Koosland. DeeDee has also displayed the unusual ability to see into the future as revealed in "Chubby Cheese" and communicate with certain animals.

DeeDee was born at least two years before her brother between June 22 and July 23 (which makes her a Cancer). According to seasons three and four, when an infant DeeDee had her first thought, she created the imaginary being Peepers, who then began to create the world that would be the host to all of DeeDee's imaginary creations, Koosland. At an unknown point, DeeDee would eventually come to meet the imaginary dragon, Koosalagoopagoop, whom she affectionately called Koosy.

When she was still a crawling toddler, her mother became pregnant and would eventually go to a hospital in Genius Grove to give birth, while DeeDee stayed home. After her parents happily returned home with their newborn son, Dexter, they introduce him to Dee Dee for the first time. Dee Dee was more than overjoyed at the sight of her brother. However, she quickly began unintentionally tormenting the newborn Dexter after poking his bellybutton, thus beginning their eternal sibling conflict.

Throughout most of their infancy, Dexter would try to build unique inventions while DeeDee kept on wrecking them with her naive curiosity. This carried on until Dexter was seven years old. Then, he found a secret area within his house that was empty and undiscovered. He decided to make this his secret laboratory and would use it as a way to stay away from Dee Dee. One day, however, DeeDee was playing in Dexter's room, pretending to be the sea captain of a ship called the Pea when she discovered a mysterious bookshelf that had never been in Dexter's room before. She then pulled a book out from the bookshelf and discovered Dexter's lab for the first time. From that point on, DeeDee has continued annoying Dexter and wrecking his lab ever since.

Dexter watched all this occur from his spy cams and happily made a toast to his beloved and reactivated Computer, who was happy to be back. After this event, Dexter had officially become the superior boy genius and Mandark became his eternally one-step-behind rival who remained completely in love with DeeDee, who was unwilling to return his affections. This would be the beginning of Dexter and DeeDee's peculiar day-to-day life filled with wacky misadventures and many difficult challenges, although DeeDee was more than happy just spending time with her brother and innocently wrecking his lab while avoiding Mandark's advances.

At a later point on the day of the important dance recital tryout, DeeDee prepared to give it her all to get the solo role in the dance recital. However it was on this day that she met her own rival, Lalavava, Mandark's diminutive sister. The two then danced against each other to prove their skills, but their dance teacher Ms. Babcock was so pleased with their abilities that she decided to turn the solo into a duet, much to their annoyance. It was at this time that Dee Dee decided to ask for Dexter's help in order to use his inventions to out-dance Lalavava. At the same time, Lalavava threatened her own brother to do the same.

At the night of the dance recital, the two arrived equipped with the Dexo-Transformer and the Mandark-Transformer and began a rampaging dance battle that destroyed the dance stage. In the end, neither received any praise for their destructive dance and lost all the glory to the backup dance. Dee Dee then asked her if she too had an annoying genius brother and both agreed that science stinks. The two then became good friends and decided to go to the mall.

After having had enough of DeeDee's tomfoolery, Dexter invents the Dreamwish-O-Tron 5000, a device that can make one's fondest dreams come true, which he plans to use to finally be rid of DeeDee. Once Dexter dreams of a world without DeeDee, his wish becomes a reality, but as time passes he realizes that he misses his dear sister and decides to get her back. As he had planned for this, the device was not programmed to completely erase her, but instead send her to a different reality that suited her needs and where her mind would be altered to make her believe she had always been a resident of that reality.

Upon tracking down her location and traveling there, Dexter finds himself transported to a girly fantasy world filled with all the things DeeDee would love. As it turns out, DeeDee has been made the queen of this world, and LeeLee and MeeMee have been transported here as well, serving DeeDee as her personal guards and advisers, likely having been wished away as well due to their strong similarities to DeeDee, a fate which also befell many other girls who shared anything in common with Dee Dee. Once Dexter confronts them, DeeDee, MeeMee and LeeLee have no recollection of who Dexter is. As Dexter tries to make DeeDee remember, she has LeeLee and MeeMee throw Dexter into the dungeon for disturbing the peace.

One day, DeeDee unknowingly came in contact with the individual that had become Dexter's eternal rival, Mandark, who proved to far outclass Dexter and even managed to shut down his lab, which made a defeated Dexter believe that it was all over for him until Mandark fell in love with the golden haired angel, DeeDee, having become completely captivated by her blessed beauty. Realizing he could take advantage of this, Dexter told Mandark how to "invite" Dee Dee to his house by luring her with candy and entertaining her with "dancing", knowing full well that DeeDee would go on a destructive ballet rampage if she was asked to dance. After following a mysterious trail of candy, DeeDee arrived at Mandark's laboratory and Mandark quickly asked his beloved to dance, and as Dexter had anticipated, Dee Dee went on a dancing rampage and destroyed Mandark's laboratory. Dexter watched all this occur from his spy cams and he happily made a toast to his beloved and reactivated Computer who was happy to be back. After this event, Dexter had officially become the superior boy genius and Mandark became his eternally one-step-behind rival. This would be the beginning of Dexter's peculiar day-to-day life filled with wacky misadventures and many difficult challenges while trying to endure DeeDee's antics and maintaining the secrecy of his lab.

She is in the sixth grade. The cartoon "Picture Day" definitively confirms this when showing a montage of Dee Dee's school pictures up to her photo from fifth grade, indicating that her sixth-grade photo is the next one to come. This is what helped fans speculate her age as either eleven or twelve (with eleven the more likely), as American children in the sixth grade are typically of that age.

He is DeeDee's younger brother who is a true genius. The only reason why she always interferes with his work and always entering his lab is because she loves him and because she thinks his lab is a cool place to play and have fun. Like any other normal siblings do, the two will sometimes quarrel and even rival each other over some certain things to see who is best, especially at games and sports. Nevertheless, DeeDee does deeply care about her brother and his well-being. Surprisingly, it is shown, albeit rarely, that the same is true in reverse, as well.

DeeDee seems to have good equal terms with her parents and hardly has any arguments with them. She even inherited her father's hair color and his playful personality. She also inherited her mother's crafty sportsmanship, especially in snowball fighting.

Mandark, Dexter's rival and villainous counterpart, has a super crush on DeeDee and wishes to make her his girlfriend. However, DeeDee is at first unaware of his feelings. But after she does become of aware them, she does not only not return those feelings, but she is even too repulsed by Mandark to return them. 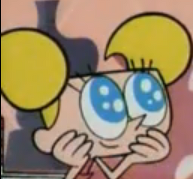 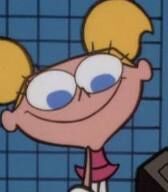 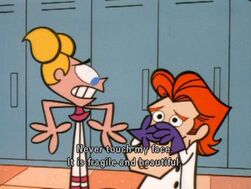 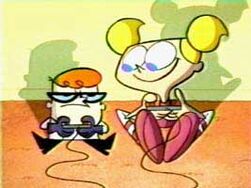 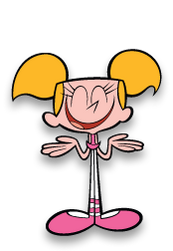 DeeDee happily goes barefoot while hanging out with her new friend, Sasquatch. 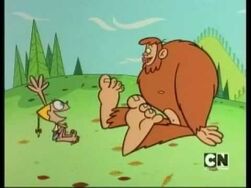 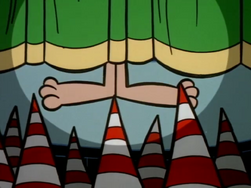 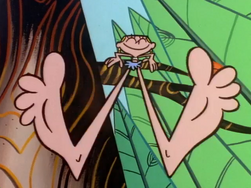 Dee Dee abandons her boots and goes on a barefoot romp with her new pal through the forest, which makes Dexter suspect the presence of a baby Sasquatch at the sight of her footprints, until his sister flaunts her bare feet by wiggling her toes at him and makes him wisen up. 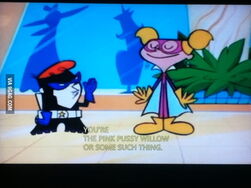 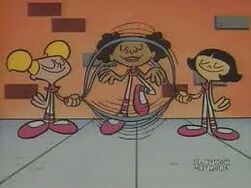 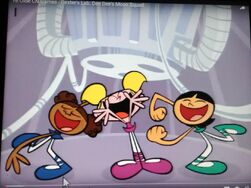