Heroes Wiki
Register
Don't have an account?
Sign In
Advertisement
in: Articles under construction, Outdated Articles, Female,
and 10 more

Sidekick of the Blue Falcon and Dynomutt

Member of the Falcon Fury crew

To prevent Dick Dastardly from retrieving the three skulls of Cerberus and opening the gates of the Underworld. (succeeded).

Dee Dee is voiced by Kiersey Clemons, who also portrays Iris West in the DC Extended Universe and voices Darling in the live-action remake of Lady and the Tramp.

Dee Dee Skyes first appeared as she welcomes Scooby and Shaggy after she saved them from Dick Dastardly's minions the Rottens. She explained the robots' attacks, but hasn't figured out the reason behind it. Dee Dee then led the duo to the Blue Falcon, who is revealed to be the son of the original Blue Falcon, and Dynomutt. However, an alarm goes off in the ship alerting that Dick Dastardly and his ship, The Mean Machine, are close by. Dee Dee explains that she tracked Scooby and Shaggy from the bowling alley to the ship before running up to the helm of the ship and piloting it as a chase ensues.

Inside the Falcon Fury, she, along with Dynomutt and Blue Falcon, explained to Scooby and Shaggy that Dastardly is collecting the skulls of Cerberus, although they still don't know what they have to do with Scooby and Shaggy, or why Dastardly wants them. They reveal that Dastardly already has one and that if they don't stop him, he'll get the other two.

Just as this was said, Dick Dastardly used harpoons to latch onto the Falcon Fury and is about to drag it in. Dee Dee, however, commands Dynomutt to send out the beam that sucked up Scooby and Shaggy, but to put it on the reverse setting, so that it pushes them away from the Mean Machine. 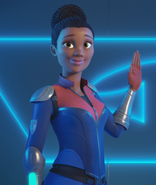 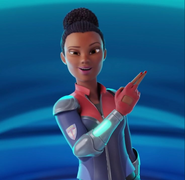