Start a Wiki
Dee Dee Tubbs is a recurring character from the FOX animated sitcom, The Cleveland Show. She is the biological mother of Donna Tubbs Brown. Dee Dee left her daughter, when she was but a baby, so she could pursue her music career. When Donna was an adult, she returned to her life and made up for some lost time.

Dee Dee and an unknown man had a baby, whom they named Donna. What happened to Dee Dee's husband is never mentioned. Unfortunately, due to Dee Dee's recent success in finding a music career, that was going to go on world tour, she couldn't take care of the baby, so she instead left Donna with Auntie Momma, (who at the time still identified as "Uncle Kevin").

When Donna was an adult, Cleveland took pity in how she never knew her real mother, but there was no way he could ever find her, so he hired an actor named Shirley to pretend to be her mother. This tricked Donna for a while, but it wasn't long before Shirley died, making Donna think that was all the time she'd ever spend with her mother, ending off her relationship with her mother on a very sour note.

While at work, Cleveland was confronted by the real Dee Dee Tubbs, who was pissed off at him over her so-called "death certificate", which had completely fricked up her mortgage and health club membership. Cleveland decided to straighten things out once and for all and so he goes to tell Donna the true story, which gets him kicked out of the house.

Cleveland and Dee Dee set up another fictional event, where Dee Dee gets "injured" in a car accident, along with Cleveland. When Donna goes to the hospital to see Cleveland, she doesn't care about him, but she does hit it off with the other woman, who she, at the time, had no idea was her mother. After Dee Dee told Donna her true backstory, she then tells her how she fits into it, finally getting Donna to reconcile with her real mother.

In "Mama Drama", Dee Dee came back into Donna's life.

In "A Rodent Like This", Cleveland was being attacked by the rabid Rat Lauer. Dee Dee then shot Rat in the back, killing him and saving her daughter and son-in-law.

In "Wheel of Family!", she and Robert adopted a Chinese baby, and raised him. 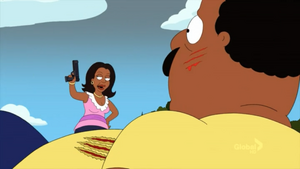 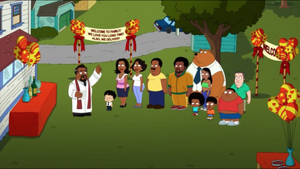 Retrieved from "https://hero.fandom.com/wiki/Dee_Dee_Tubbs?oldid=1635600"
Community content is available under CC-BY-SA unless otherwise noted.