Member of the Grottan Clan

Energy absorption (given to by the Sanctuary Tree)
Dreamfasting

Free Thra from the Skeksis' tyranny and restore peace to the world.

Deet is one of the three main protagonists of The Dark Crystal: Age of Resistance. She is a Gelfling from the Grottan Clan who cares for animals.

She is performed by Beccy Henderson, with Nathalie Emmanuel providing her voice, the latter who also played Ramsey and Harriet.

Deet has pale chartreuse green skin, large ears, wide brown eyes, and long and unkempt light blonde hair with tied small braids. She wears a brown dress with a leather cover said to be made from Nurloc rump. Her wings are slender and dark brown with blue wing veins.

Deet is free-spirited, brave, friendly and spiritual as she loves and respects all living things (especially animals). She appears to have shamanic powers since she was able to commune with nature, talk to spirits and empathize with animals; this shows Deet is pure of heart and is sweet to everyone. Despite her gentle nature, Deet will do anything to protect her friends and family when the Skeksis threatened her clan and planned to wipe them and the rest of the Gelflings out. But when the Skeksis push her too far, Deet inherits the powers of the Sanctuary Tree and is able to harness and channel the Darkening—which she does and attacks the Skeksis out of pure anger to protect her friends and family and kills SkekLach the Collector.

Deet sets out to feed the Nurlocs native to the caves with moss, unaware the plant is poisoned by the Darkening. It begins to attack her. Deet, in a panic, manages to escape, where she finds the Sanctuary Tree, and remembers she has not been there since she was small. Suddenly, the tree begins talking to her, much to Deet's surprise. It reveals that only few can hear him. Sh e reminiscent on how those Nurlocs went mad and chased her. He tells Deet that it was not the Nurloc mother's fault, because she had been corrupted by the Darkening. Curiously, Deet asks what "the Darkening" is, and he reveals that it is a disease that is causing the planet to die. The Tree shows Deet a series of visions, one of them being what the Skeksis are doing, a picture of Deet harnessing the Darkening and all creatures of Thra reacting. She sees Aughra in the visions as well. Overwhelmed by the powers and series of visions, she falls to the ground unconscious.

Luckily, she is found by her fathers and brother and taken back home, where Deet wakes from unconsciousness. s the Maudra of their clan, Argot arrives to take care of Deet's wounds, Argot and her fathers reassure her that she is safe, but Deet reveals that none of them are safe and that the darkening is spreading throughout all of Thra. Deet reveals that the Sanctuary tree talked to her and that is when Maudra Argot realizes that it it is a serious matter. She asks what the tree showed her, with Deet revealing a series of visions, one of them being Aughra. Argot realizes that Deet must leave her home to go to Ha'rar and the All-Maudra, much to her family's reluctance, and inform her of the Darkening that is spreading throughout Thra. Argot gives Deet supplies to help her, including a solution that will heal her broken wing and a cloth that will help her adapt to the sunlight. She tells Deet to follow the brightest star to get there. Deet leaves Grot and goes to the world above while her parents and brother give her a tearful goodbye as she makes it to the world above and sees it for the first time.

While exploring the new world, Deet finds herself alone and decided to take a nap. However, an Arathim soldier attacked her, and terrified, Deet tried talking to the creature, but nothing could stop it. Before it could ambush her, Deet was suddenly saved by the Podling, Hup. With both their courage, they fend of the Spitter while Deet swings Hup (who was encased in spider web), who hits the Spitter and sends it running off. Hup and Deet exchange names with each other and both learn they are heading to Ha'rar together: Deet is going to warn the All-Maudra about the Darkening while Hup hopes to become the first Podling to be a paladin. She nearly goes the wrong way to Ha'rar, mistaking the moon to be a star but Hup points her in the right direction.

As the two made their way to Ha'rar, Deet, while fascinated by the world above, Deet sees that the Darkening could destroy it all. However, Hup assured her that they would "win" when they arrived in Ha'rar. Deet hoped that the Gelflings would all unite but Hup told her that none of the Clans trust each other. Sometime later, they wanted to rest in Stone-in-the-Wood, but Deet was mistreated by the Gelfling who lived there. Hup saw this and came to defend her while Deet tried to stop. However, one of the Stonewood guards thought Hup was causing chaos in the town and had him imprisoned. Deet shouted for them to release him but the Stonewood guard told her to take it up with their Maudra, Fara. However, the guard at Fara's door refused to admit Deet into her court. She was outraged when another Gelfling, Rian, got in to see Fara, but Deet was turned away. Now alone, Deet tried figuring a way to save Hup when she came across a plant-like animal in the trees and feeds it glowing mouth. However, Deet is suddenly scared by Rian, who was recently cast out of the Stonewood clan. When she heard him struggling with his fire, Deet gave him a friendly "hello," but Rian was startled by her appearance and brought out his sword, thinking she was sent by his father. However, after seeing her confess that she was actually sent by Maudra Argot. Rian was perplexed but relaxed by her kindness and was put at ease that she wasn't scared of him. Deet recognized him as the boy she saw in the village. Rian apologized to Deet for that, but she said that he could make it up to her by helping her get in to see Maudra Fara about releasing Hup. However, Rian informed her that he was casted out of his clan and Deet was sympathetic to him. Despite him being unable to help her, Deet helped Rian light up his fire. Rian is both slightly embarrassed and grateful that they got the fire going. The two introduced each other. Rian was surprised that she was not scared of him.

When she questioned of she should be, Rian just told her people thought he was a monster but Deet told him that she didn't think he was a monster. This also caused Deet to come to the conclusion that she had to masquerade as a monster to ensure her friend Hup's escape. She left saying thanks, and leaving Rian both sadden and alone once more. Inspired by Rian, Deet ingested blue moss that made her skin grow blue and disguised herself with the various plants as a monster. She flew to where Hup was being  held captive and began terrorizing the Gelfling guards left to guard him by flying around and making strange noises and turning the torches off. The Gelflings are scared off and when Deet goes to free Hup, he is at first frightened of her until Deet reveals who she is. Hup is happy to see that she came to see him.  The two of them make it out of Stone-in-the-Wood and on their way to Ha'rar. They both joke about the situation. Deet nearly enters a patch of Gobbles, a field of flesh-eating plants but Hup warns her before she can enter it. He demonstrates its properties by throwing a stick onto the patch of Gobbles. Deet now understands and thanks Hup for warning her. They suddenly hear thunder and lightning and realize that a storm is approaching. They go to rest and wait out the storm to continue for Ha'rar.

As they set up camp for the night, Deet suddenly saw Rian being chased by the Skeksis, SkekMal and both she and Hup ran to Rian's aid. However, they were too late, as Rian's father, Ordon, had been eaten by the Gobbles, along with SkekMal. Hup and Deet restrain Rian, who attempts to try to save his father. However, Rian sees that his father is gone. Deet says nothing but looks at the Gobbles when suddenly, Rian, Deet and Hup hear something coming from the Gobbles. SkekMal leapt up from the field alive and kidnapped Rian while Hup and Deet were helpless to do anything to save him.

However, Deet and Hup had to continue on her way to Ha'rar; however, Deet stopped when her companion broke down sobbing. Hup attempted to dissuade Deet not to go to Ha'rar due to his fear for her. The Podling confessed that he didn't think himself capable of protecting her after Rian was kidnapped. However, Deet reassured Hup and helped raised his confidence and they pressed on to Ha'rar, where Deet disguised herself as a Vapran nobleman and was able to get an audience with the All-Maudra. However, they were stopped by Seladon, who saw that Deet was not a Vapra Gelfling but a Grottan. Instead, Seladon had Deet share with what she intended to tell her mother.AAs theydreamfasted, Deet suddenly found herself in the Dream Space, a realm that connected all of Thra, after Aughra performed a spell too summon the heroes of Thra. She was reunited with Rian, who had escaped SkekMal with help from Gurjin and Naia. They were joined by Aughra, Kylan, Brea, Mayrin, Gurjin and Naia, where Aughra revealed she called them to inform them that their world was dying. When Seladon refused to listen due to her loyalty to the Skeksis, Aughra sent her away and told the remaining Gelfling of the Skeksis' crimes. Deet learned of what Rian and Brea had went through and how badly the Darkening had affected Thra. Aughra told Deet, Brea and Rian to go with Lore to the Circle of the Suns to seek answers from SkekGra and UrGoh to defeat the Skeksis. Deet later reawoke, to find herself and Hup surrounded by paladins. However, Mayrin and Brea ordered the paladins to stand down, as Deet and Hup were their allies. The group confronted the visiting Skeksis, SkekVar and SkekZok, where Mayrin stood up in defiance; enraged, SkekVar murdered the All-Maudra. Deet comforted Brea, however, Seladon branded Deet and Brea as traitors and they were taken away, with the Skeksis intending on taking them back to the castle. 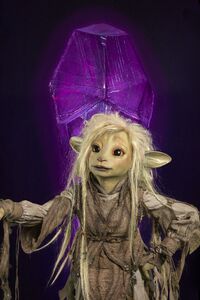 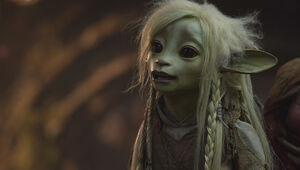 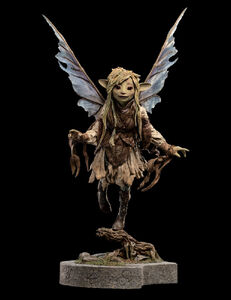 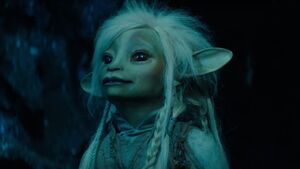 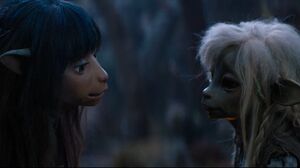 Deet and Rian meet each other.

Deet with her best friend Hup.
Add a photo to this gallery

Retrieved from "https://hero.fandom.com/wiki/Deet?oldid=1810459"
Community content is available under CC-BY-SA unless otherwise noted.