Doctor Stephen Vincent Strange, M.D., Ph.D., also known as Defender Strange, is a minor character in the 2022 film Doctor Strange in the Multiverse of Madness. He is an alternate version of the Sorcerer Supreme who befriended America Chavez, who was being pursued by creatures across the multiverse.

When failing to obtain the Book of Vishanti, Defender Strange attempted to absorb her powers to protect the multiverse, but was mortally wounded by the Ribboned Creature. Though dying from his injuries, his corpse was vital in Earth-19999 Doctor Strange fighting Scarlet Witch to save America.

He was portrayed by Benedict Cumberbatch, who portrays the character's mainstream counterpart, and also played Sherlock Holmes in the titular BBC series, and also voiced Classified in Penguins of Madagascar, The Grinch in the titular 2018 film, and Strange Supreme in What If...?

The history of this version of Doctor Strange has some similarities to his mainstream counterpart, with him joining the Masters of the Mystic Arts and becoming the sorcerer supreme. According to America Chavez, this version of Strange was acquainted with Christine Palmer, but never got together as he blew it.

At some point, Defender Strange came across America Chavez, who was being pursued by monsters under the control of Scarlet Witch for her ability to travel across the multiverse. Strange agreed to protect from the creatures, and the two traveled to find the Book of Vishanti so Stephen could obtain power to defeat their enemies. The two were attacked by the monsters and failed to obtain the book, and Strange realized that Chavez's powers could forsake the multiverse if taken by the wrong hands. He then decided to kill her to save the multiverse, but he was mortally wounded by the Ribboned Creature before he could finish the spell. When the creature attempted to attack Chavez, Defender Strange used the last of his power to protect her, which resulted in America creating a portal to Earth-19999. Though Stephen was brought along, he died of his injuries as Chavez left his corpse on top of a building.

Doctor Strange in the Multiverse of the Madness

When meeting Earth-19999 Doctor Strange, Chavez decided to show him and Wong Defender Strange's corpse to prove that she could travel across the multiverse. Strange then buried his alternate self before going on a journey across the multiverse, and learning that Scarlet Witch was behind the creatures searching for America. When Wanda captured Chavez within the Earth-19999 universe, Doctor Strange dream-walked Defender Strange's corpse and merged the body with spirits that were drawn to the forbidden spell. Strange then battled Scarlet Witch with his alternate self, and later abandoned the corpse after Wanda destroyed all Darkholds within the multiverse. 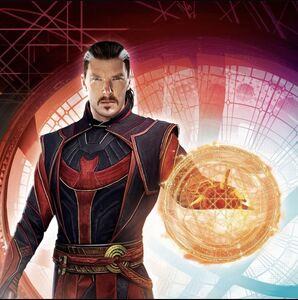