Member of the Anti-Auditor Agency

Defeat the Auditor and the A.A.H.W..

Special Agent
Deimos is one of the three protagonists of the popular Madness Combat series on Newgrounds. He is the partner of Sanford and, along with him, appears to be a member of an organization that opposes the main antagonist of the Madness series, The Auditor.

Deimos's background is unknown, though certain posters in the background suggest he may have been a member of the A.A.H.W. before defecting from it.

Deimos first appeared along with Sanford to deliver the Dragon Sword to Hank J. Wimbleton. However, the Improbability Drive caused them to get crushed by a building shortly after.

However, Deimos and Sanford survived and fought their way through the A.A.H.W. forces. Eventually, the two raided an A.T.P. Soldat facility and blew it up.

Sometime afterward, Deimos and Sanford hijacked a truck carrying a squad of A.T.P. Engineers. They then headed towards where Hank's body was located at after he was killed by Jesus. While Sanford held off the A.A.H.W. soldiers, Deimos went to revive Hank in a magnification chamber. Deimos succeeded in magnifying Hank, but was killed by one of The Auditor's possessed Engineers shortly afterwards.

In his "Deimos Adventures" spinoff, he finds his way of out of Hell after being killed in Madness Combat 9 while enduring the horrors that awaits him. 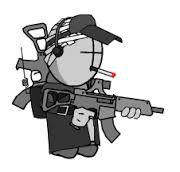 Deimos with his partner Sanford 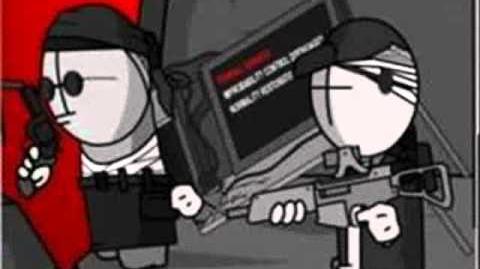 Deimos tribute
Add a photo to this gallery

Retrieved from "https://hero.fandom.com/wiki/Deimos?oldid=1785486"
Community content is available under CC-BY-SA unless otherwise noted.