Racing with his father.

Possessed Object
The Deku Butler's Son is a character from the video game The Legend of Zelda: Majora's Mask and it's 3DS remake. Despite only having a minor in-game appearance, his spirit continues to aid Link throughout his adventure in the form of the Deku Mask.

Very little is known about the Deku Scrub's past, but some point he perished within the tunnels connecting Hyrule with Termina and his spirit was used by Skull Kid to transform Link into a Deku Scrub. Link and Tatl soon find what remains of the Deku Butler's Son as they approached the entrance to Termina's Clock Tower. His body had became a twisted tree which Tatl uses to remind Link about targeting objects. The scrub's spirit meanwhile remain merged with Link for almost three days until the green-clad hero played the Song of Healing to seal it within a mask. Link reverted to his original shape but continued to assume the Deku Scrub's form whenever needed by wearing the Deku Mask. Eventually Link was led through an elaborate shrine by the Deku Butler to acquire the Mask of Scents. The butler mentioned how Link reminded him of his son and the races they would have together inside the shrine. During the game's end credits, The Deku Butler can be seen mourning over his son's fate. 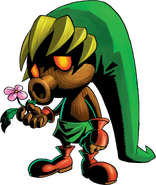 Link assuming the form of the Deku Butler's Son.