Doing graffiti and using his powers for good (Good Karma)

Drain Augustines powers to save the Akomish tribe (succeeded).

Fight crime in seattle like drug dealers and Akuran gangs.

From Zero to Hero,
Superhuman warrior,
Mutated being,
One-Man Army

Delsin Rowe is the main protagonist of InFamous: Second Son. After living a human life for 24 years, Delsin, a graffiti artist and local delinquent of the Akomish Reservation, discovers he is a Conduit/Bioterrorist after touching a Department of Unified Protection (or D.U.P. for short) captive named Hank. This action alone activates Delsin's respective powers, and quickly begins to realize that he has the unique ability to absorb any other Conduit's powers after touching them. With his new found arsenal, he travels with his older brother to Seattle in order to dismantle the D.U.P.'s operations, and acquire its director's power of Concrete so he can heal his fellow Akomish members. Due to game mechanic, player can choose him to become a hero or villain like his predecessor.

Technically, he is "successor" of Cole whom took his hero mantle if he uses his powers for good.

Beginning of the heroism

Delsin is a 24-year-old Native American from the Akomish Tribe. Believing that he is destined for greatness, Delsin's occupation as a street artist, and his uncontainable penchant for free expression, sets the perfect background for his standoff with the D.U.P. Delsin has a rebellious attitude and favors anti-authoritarian street art. Unfortunately, Delsin's tendency to tag buildings and structures with graffiti constantly irritates and embarrasses his older brother, Reggie Rowe, who is forced to keep arresting him "over and over and over again".

After being confronted by his brother, Reggie, over vandalizing the latter's "Congrats, New Sheriff!"* billboard, the brothers witness the crash of a military truck transporting a trio of Conduits - Hank, Abigail Walker, and Eugene. While Abigail and Eugene quickly get away, Delsin attempts to help Hank out of some rubble and, for his troubles, becomes a hostage in the resulting standoff with Reggie.

During the struggle, Delsin accidentally absorbs Hank's powers and falls unconscious. After coming to, he finds the area around him in shambles. Discovering his newfound power, a frightened Delsin manages to reach and save his brother. Although Reggie, greatly perturbed by the turn of events, tells him not to use his new "tricks", Delsin uses them to chase him into the nearby burning fish cannery, attempting to save Betty who is trapped in the building. Armed with nothing but a chain and his underdeveloped smoke powers, Delsin chases Hank into the D.U.P.'s custody. Unfortunately, D.U.P.'s leader Brooke Augustine uses her cement powers to brutally interrogate Delsin.

When Delsin finally wakes up, he learns from Betty that the rest of the tribe were injured by Augustine's cement daggers. He learns from Reggie that the Akomish are all dying, and that the only way to save them is to use a Conduit's Concrete power. Realizing from his encounter with Hank that he can absorb other Conduit's powers, Delsin convinces his brother to take him to Seattle where Augustine's forces have chased down the other two Conduits, and absorb her powers to undo what she did.

Arriving in Seattle, Delsin soon learns that the D.U.P. have effectively taken over the city and their ranks are bolstered by Forced Conduits, regular humans who can wield a small portion of Augustine's powers. A couple of days later, the brothers learn of a Conduit serial killer wielding Neon powers and decide to hunt her down; both to stop her killing and to absorb her powers to help with the final confrontation with Augustine.

Investigating the murders, the brothers discover the victims are all drug-dealers, instead of random people, as the media have made the rest of the city believe. They soon learn that the Conduit is a girl named Abigail Walker, one of the escapees, and she is seeking to avenge her brother's death at the hands of the drug dealers. Delsin chases Abigail down and defeats her absorbing her neon powers as a result.

Delsin convinces Reggie to let Abigail work with them to both dismantle the D.U.P.'s and the dealer's operations.

From there on, Delsin and his friends start to use their respective powers both to perform good deeds and help others while fight their way to stop their enemies' evil plans at the same time. He also tries to absorb some of his enemies' power that similar with Agustine's concrete manipulation, but unable to retrieve one as those powers are not fully bestowed.

After several skirmish and commits many good deeds, Delsin meets up with his allies and together they agree that it's time to put a end to Augustine's plans. Using the information with which Hank provided Delsin, he is able to create a gap in the channel 9 news station/converted D.U.P. headquarters and together with Eugene and Abigail assaults the building, making their way through the building. Unfortunately, during the struggle, Augustine brutally murder Reggie, forced him to perform Heroic Sacrifice where he intentionally let himself fall to his death, encites Delsin's rage in process. Finally, Delsin confronts Augustine in the building's news room.

There, Delsin states that he knows everything from begging to that moment. Augustine then explains her true motives: she has been capturing, but never killing, Conduits to prevent them from being killed by irrational civilians like they were in the pre-D.U.P. bloodbaths. To this end Augustine attempts to convince Delsin to help her regain the public's trust, and help her save more Conduits around the globe.

However, Delsin doesn't care about Augustine's excuses due to horrifying consequences of her plan(in fact, her methods are both more active and aggressive than Joseph Bertrand 3 did in the past), and decides to take her down and expose her. Without fully developing his newest powers, Delsin is almost beaten by Augustine, who has nearly a decade of experience with hers. Thankfully, Eugene is able to throw several Core Relays into the room, with which Delsin is able to become powerful enough to slowly wear down Augustine's monster form and capture her.

With Augustine captured, Delsin is able to expose the D.U.P.'s operations to the world. As Augustine is hauled away by authorities, the crowds, finally free, cheer and Delsin reflects on this, implicitly noting the irony of a government figure being "taken down by a gamer, an ex-junkie, and a small town delinquent. Delsin's actions set off a "Second Age", where Conduits and humans can coexist. Delsin also comments that the Conduits of Curdun Cay were also free to live as they see fit.

That said, Delsin himself had some unfinished business to attend to since, he got the power he needed. He returned home to heal his people of the injuries Augustine inflicted upon them. After curing the tribe, Delsin celebrate his brother's life by giving him a graffiti memorial atop the Fish Cannery. When finished he takes one good look, and almost in tears says, "I love you brother, and I'm sure gonna miss you." With that, he sets his paint can down and walks away.

Potentially became the most powerful Conduit, Delsin has a powerful abilities called Power Absorption, that grants him ability to absorb and use different powers and elements, independently from one another. To do this, the he must first find a Conduit that possesses the desired power. He then make hand-to-hand contact with a Conduit to absorb their power. Conduits, whose powers were absorbed, do not lose their power. Another effect of this ability allows the user to see the targeted Conduit's memories. This is how he gain his High-Temperatured Smoke manipulation, Neon Energy Manipulation, Video based Digital Constructs Manipulation, Concrete manipulation from his opponents.

However, once he gain his enemies' power, he will passed out, which is dangerous if he is in the middle of field and dangerous situation. Then, when he gain a new power, he must fully master it so he can switch to his previous ones. The last, but not least, he can't switch his power by his own will; He had to absorb energy from elements that controlled by the power that he wished to use. For example, when his Neon powers activated but wishes to switch his power into Smoke powers, he had to absorb smoke to do so, which explain why he never seen to use two powers at the same time. 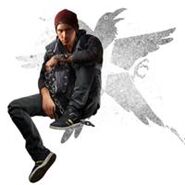 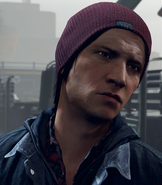 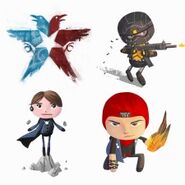 Add a photo to this gallery
Retrieved from "https://hero.fandom.com/wiki/Delsin_Rowe?oldid=1937509"
Community content is available under CC-BY-SA unless otherwise noted.