Demitri Maximoff is a deuteragonist of Darkstalkers series who is a vampire who first appeared in Darkstalkers: The Night Warriors and was the main character of the series. He was originally planned to appear as the protagonist of the series, but Morrigan Aensland took his place because of her popularity.

His game play strikes many similiarities to Ryu and Ken Masters from the Street Fighter franchise. Demitri was also a playable character in the Capcom crossover, SNK vs. Capcom: SVC Chaos and in Capcoms very own Capcom Fighting Evolution.

Deep within the mountains of Romania lies a castle that appears only on a full moon. The castle, named after the owner of the land, was called Zeltzereich. This castle belonged to a Makai noble, Demitri Maximoff.

Roughly 100 years ago, he had challenged Belial Aensland. He lost the battle and was exiled from Makai to the human world with his castle. Sunlight was something that was troublesome for people of Makai, especially for Demitri, who was wounded severely from his battle with Belial. If he were to be directly exposed, his body would be destroyed from the inside and he would disappear.

To avoid the sunlight and humans, he used what he had left of his powers and created a field to cover his castle. He used this field to recover his strength and heal his wounds. For 50 years, he stayed within his casket. As he slowly regained his strength, he would step out only once a full moon put a shield around his body.

By this time, there were already people that would wander into the castle. They would somehow hear rumors of treasure's within the castle. They would bring crosses, stakes, garlic, holy water and silver bullets thinking they were safe and recklessly attack Demitri. Demitri couldn't help but smile as such weapons had no effect on him. To Demitri, humans were a low class vulgar race, but he enjoyed their blood. He enjoyed the blood of innocent girls the most. To him, it was like drinking the best wine in Makai. Those who had their blood sucked by Demitri had their body and soul poisoned with evil. They would become loyal servants to Demitri. Currently, 40 people settle in Demitri's castle and care for him.

The presence of an alien life form on Earth was an unexpected event for Demitri. Demitri seized this opportunity to further gain strength and fought against Pyron and consumed the alien life form. He was confident that he was strong enough to challenge and defeat the ruler of Makai, Belial.

When he returned to Makai, he found out that Belial had died and his daughter, Morrigan Aensland, had become heir to the Aensland family and the ruler of Makai. As Demitri prepared himself to challenge Morrigan, he and his castle were sucked into the Majigen by Jedah Dohma. Believing that defeating Jedah was an important step, he went off to face Jedah.

Demitri is capable of flight and is physically very strong. He is gifted with pyrokinesis, capable of launching large blasts of flame and flaming bats (both different versions of his Chaos Flare) from his hands. His cape is amorphic, capable of forming demon wings or a pointed tip with his Demon Cradle and Bat Spin attacks respectively. He can slash and pierce enemies with this. While the aura surrounding his body is mainly for protecting him from the sun, he can also utilize it to enhance his Demon Cradle and Bat Spin, covering them in energy and increasing their power. For brief periods, he can revert to his true form which is a large winged and fanged demon. He also has the unique ability to temporarily change the gender of male opponents. He will then revert to his true form and suck out a large portion of blood from whoever he has transformed.

As seen in his intro animation, he can transform into a bat like traditional vampires. Another common vampire motif he has is that he is able to convert whichever human he bites to be his servant but it isn't known if this ability works on darkstalkers. He was even able to consume the mighty Pyron's energy after besting him in combat.

In Vampire Savior, along with the Darkstalker series, Demitri uses an attack known as Midnight Bliss, where he transforms a character into another, more arousing form — if the victim is male, he turns them into a female version of themselves —, then drains their blood/life-force, which causes them to shrivel up into a skeletal husk, before being burned and returned to normal. This move is also used in SVC Chaos: SNK vs. Capcom and Capcom Fighting Evolution. Certain female characters, like Morrigan and Lilith, actually receive comedic forms. Demitri also has the Midnight Bliss as a skill in Namco x Capcom that can be used on the map screen; however, it merely drains a single enemy's health and does not transform it.

Demitri makes an appearance in Project X Zone. He is a playable character who is partnered up with Dante.

In Project X Zone 2, Demitri is also a playable character, where he is partnered up with Morrigan, with Dante's partner this time being his twin brother Vergil.

Head of the House of Maximoff and a Makai noble. More than a century ago, he challenged the King of the Makai, Belial, in battle and was defeated, resulting in his banishment to the human world. There, he quietly regained his powers before returning to the Makai. After the death of Belial, his daughter and successor to the Makai throne, Morrigan, became Demitri's target. However, upon sensing the presence of the resurrected lord of the House of Dohma, their battle was temporarily put on hold. Demitri now burns with a desire to put the upstart Jedah back in his place. While he acts as a proud and noble gentleman outside of battle, once the fighting starts his cruel demonic tendencies come to the fore. He also pays a great deal of care to his personal appearance, always carrying a can of hairspray tucked away inside his cape. 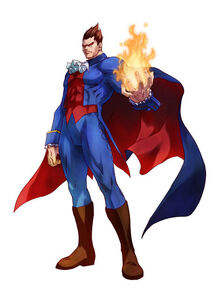 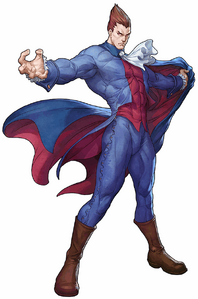 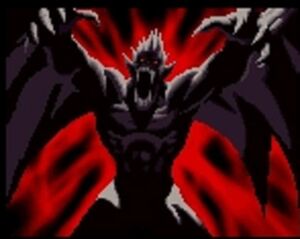 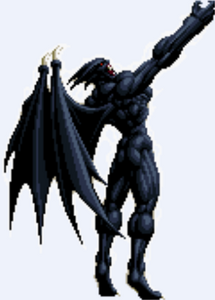 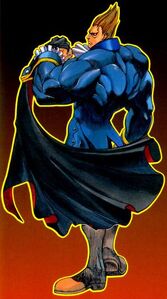 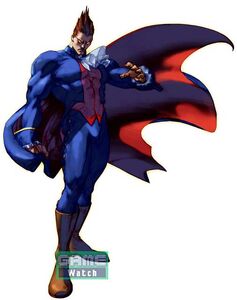 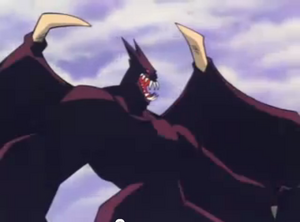 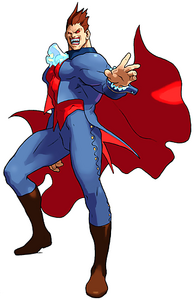 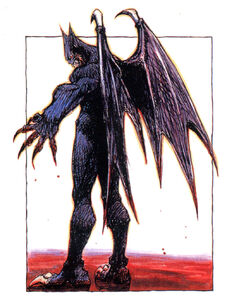