Hunt down Kenai (as a bear) while supposedly avenging his "death" (formerly).
Assist Kenai in his missions.

Kenai
Koda
Koda's mother †
Tanana
Other members of his tribe

Kenai (temporarily; as a bear)

He was voiced by the late Jason Raize (who was the first actor to portray Simba in the stage version of The Lion King) and by the late Harold Gould as an elderly man.

Denahi is the older brother of Kenai and the younger brother of Sitka, thus making him a middle child. At some point, upon reaching manhood, he received a totem from his village's shaman woman Tanana know as the Wolf of Wisdom.

Denahi is first seen as an elderly man telling his story to the younger generations.

As a young man, he was seen fishing with Sitka, only for it to be cut short after Kenai unintentionally leads a large herd of caribou towards them. Fortunately, the brothers are able to avoid being trampled by the caribou, though Denahi is kicked in the back of the head by one of the caribou. Annoyed at Kenai, Denahi pins him to the ground and tries to drool on him, before being pulled off by Sitka. Kenai tells Sitka after today, Denahi cannot treat him like that anymore. Denahi realizes that Kenai is referring to his manhood ceremony where he will receive a totem and replies that it does not matter what the spirits say as Kenai will always be his and Sitka's baby brother. Denahi and his brothers return to their tribe with Denahi instructing Kenai to tie up the basket with the fish they caught up high to avoid bears getting them. However as Kenai leaves to attend his ceremony, the rope suspending the basket comes loose, causing the basket to fall to the ground, spilling the fish.

Denahi later witnesses Kenai's totem-receiving and teases him for the totem being the "Bear of Love", before being sent away by Sitka to deal with the fish. Moments later, Denahi confronts Kenai over not tying up the basket properly (as it has been taken by a bear) and says that Kenai should have got the totem of pinheads. Sitka tries to calm the situation by saying that they'll just make another basket, but Denahi replies that it took him 2 weeks to make the basket and tells Sitka to get Kenai to do. Kenai leaves to get the basket back from the bear. Denahi and Sitka went after him and saw him getting attacked by the bear. As Kenai tries to save Denahi from falling down the side of a glacier, Sitka breaks the part of the glacier he is on with his spear and falls into the waters with the bear to save his brothers. Shortly thereafter, Kenai and Denahi hurry down to find Sitka, only to find his hood.

After Sitka's death, Kenai attempts to convince Denahi that they should go after the bear. Denahi tells Kenai that even though he knows what he is feeling, killing the bear would be wrong; however, Kenai says that their brother is dead because of the "monster". Denahi says that he doesn't blame the bear for Sitka's death, implying that he instead blames Kenai. Denahi advises Kenai against avenging Sitka's death as it may anger the spirits, but a frustrated Kenai sets out to kill the bear anyway. Kenai does so and is transformed into a bear by Sitka as punishment. As Denahi arrives at the scene of the battle, he sees scraps of his brother's clothes and Kenai in his bear form. Thinking his brother lost the fight and was also killed by the bear, a saddened Denahi vows to avenge Kenai. He begins to hunt Kenai's bear form relentlessly across the wilderness, not understanding that the bear is actually his brother.

He first sees Kenai in the woods, where he hides behind a tree. When Denahi comes out to attack, Kenai sees him and tries to talk to him, still unaware he was a bear and that Denahi therefore could not understand him, so Denahi tries to stab and kill Kenai.

Later, at lava field, Denahi finds Kenai in his bear form and tries to kill him, but Kenai hits him and tries to escape with Koda. Denahi then breaks the log bridge that Kenai and Koda are getting across with his spear, but Kenai and Koda still manage to get to the other side, making Denahi briefly giving up chasing them. Denahi jumps to the other side, but instead ends landing on the bridge, and then the logs and Denahi fall into the waters bellow, despite Kena's attempt to save him.

Afterwards, Denahi is seen beside a small campfire. He is about to give up pursuing Kenai when he sees an eagle that he recognizes as Sitka. Following the eagle, he reaches the mountain where the (Northern) lights touch the earth. There he sees Kenai as a bear again and attacks him, but is stopped by Koda who jumps and steals his spear. Denahi runs after Koda and Kenai chases them, telling Denahi to leave Koda alone. During this, Sitka arrives and turns Kenai back into a human before Denahi suffered the same fate as Kenai. Shocked and confused, Denahi threw down his spear. When he sees how much Koda means to Kenai, he redeems himself, even telling Kenai that he "looked a better as a bear" and that he will always be his little brother, no matter what Kenai chooses to be.

Later, Kenai is turned back into his bear form, but is still made known as a man. Denahi is there during the manhood ceremony and helps his brother put a handprint on the wall. 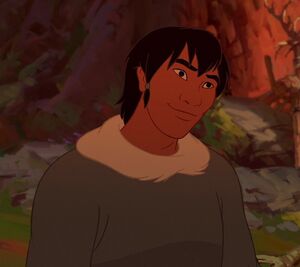 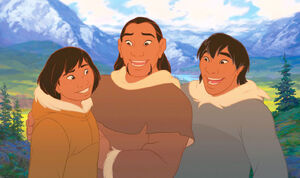 Denahi with his brothers Kenai and Sitka.

Denahi was crowned as its tribe leader.

Denahi and Tanana hugging each other.

Denahi with his younger brother Kenai (as a bear).