No information
Dende is a character from Dragon Ball Z. He was a child from Planet Namek. He helped Son Gohan and Kuririn use the Dragon Balls, and was sent to Earth along with the rest of his revived race. Later when Earth needed a new guardian, he was chosen, and helped create the new set of Dragon Balls made from the old ones. Since he's been Earth's guardian.

Dende is a Namekian child who befriends Gohan and Krillin during their quest for the Dragon Balls of his planet. Later, after Kami merges with Piccolo, he becomes the new Kami of Earth to make sure the Dragon Balls stay active on the planet.

In his first appearance, Dende is very similar to Piccolo as a child except for their attire. During the Great Saiyaman Saga, Dende grows taller with sharper eyes and wears the clothes of a Guardian of Earth. Later during the release of Majin Buu and the events of the Kid Buu saga and onwards, Dende wears the same attire as a child. 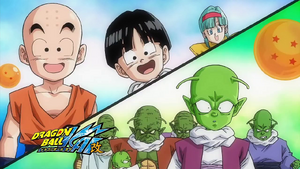