Hanging out with Helen, Killing Yoma

Monster Slaying Warrior, Determinator
Deneve is one of the main protagonists in the manga/anime series Claymore. She is a Claymore, ranked 15th in the Organization and a member of the Seven Ghosts, as well as Helen's lifelong best friend. She possesses a calm and understanding yet serious personality, but can be a perfectionist. Her regeneration ability is superb, even for a defensive fighter, and her skills are unique.

Deneve has silver eyes and pale blonde hair styled in a pixie cut. Before the Seven Year Time Skip, she wore the standard Claymore uniform. She now wears the same dark outfit like the other "Six" of the Seven Ghosts. She is 175 cm tall.

Deneve is Helen's foil: a calm and logical woman, often telling Helen not to be so rash. She has a great deal of pride, as seen when she would not talk about the time she was saved by Clare, who was lower-ranked than her. Helen reveals that Deneve is a perfectionist and does not settle for anything less for herself or others. Deneve is not afraid to take risks, though; before meeting Helen, she would fight suicidally and after the fight in Paburo Mountains, she volunteered to demonstrate how a Claymore could pass the 80% limit without Awakening.

However, she is shown to be very understanding, evidenced when she correctly figures out Undine's past and sympathizes with her. She also admits to thinking herself less of a warrior for being a defensive type, explaining her frequent disregard for her own life. Deneve is capable of making strong bonds of friendship as she is rarely seen without Helen, and was extremely distraught at Undine's death, blaming herself for not being able to protect or avenge her.

Deneve has an incredible proficiency of regenerating parts of her body, which was strengthened when she became half-Awakened. She has been seen regenerating lost limbs in an instant as well as heal from wounds that would be fatal even for a defensive-type Claymore. One such example was when Isley cleaved her from the shoulder down. However, pre-timeskip, it took most of her Yoki to regenerate a limb. Perhaps Deneve possesses such strong regenerative abilities due to a subconscious desire to live, despite her initial suicidal nature.

Like the rest of the survivors of the North, Deneve has learned to suppress her Yoki in order to remain hidden from the Organization.

Following Undine's death, Deneve took it upon herself to carry Undine's sword and practice using it to great effect. She is able now to augment her strength to wield the two swords effectively. 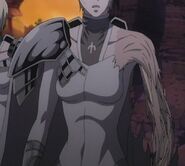 Add a photo to this gallery
Retrieved from "https://hero.fandom.com/wiki/Deneve?oldid=1854798"
Community content is available under CC-BY-SA unless otherwise noted.