Member of the Nine Red Scabbards

Overthrow Kaido and Orochi and avenge the Kozuki clan (ongoing).

Denjiro in his undercover alias as Kyoshiro is one of the major character of One Piece Wano Country Arc. He is one of Kozuki Oden's retainers. After escaped the Kozuki Family's castle, he managed to gain Orochi's trust to become his subordinate as a spy for the Kozuki family to overthrow him and Kaido.

He is voiced by Daisuke Kishio.

Denjiro is loyal to Kozuki Family and his friends (especially his best friend, Kin'emon as he address him as Kin). He work for the family as a spy to ensure to overthrow Kurozumi Orochi. When Orochi forbidden all training methods, Denjiro calls the Shogun as a coward. Ensure of Hiyori's safety, Denjiro faked her death allowing her to escape with Toko.

He enjoy being drunk after drinking alcohol.

As a samurai, Denjiro has tremendous talents for swordsmanship while wielding two katanas.

Denjiro is intelligent when deceiving Orochi and his family while undercover as a spy. He also deceives Orochi's spy, Kanjuro. 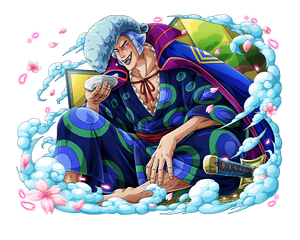