Get rid of Mr. Kat as quickly as possible (succeeded)

He is voiced by Cathy Weseluck who is well known for voicing Spike from My Little Pony: Friendship is Magic and Marco Van Helsing from Lobo.

Dennis has black hair and black eyes but unlike his father, he does not have an Asian accent.

They used to hang out and defeat Kat together and his one of Coop's neighbors. His father's name is Henry. He lives with his high-tech family and lots of future technology. Dennis and Coop's Birthdays are one day away from each other and they always wish for the same presents. They have been friends since preschool, Dennis is the only one who believes Coop about Kat, but he also believed Coop in preschool when Coop said that pigeons flew in threw the window and drank all of Dennis's chocolate milk while he was going to the bathroom. 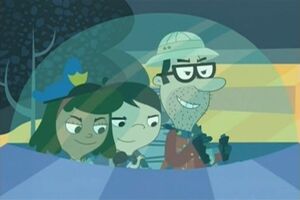 Add a photo to this gallery
Retrieved from "https://hero.fandom.com/wiki/Dennis_Chan?oldid=2255485"
Community content is available under CC-BY-SA unless otherwise noted.