Derdekeas was an ancient Mekhanite who followed the teachings of Mekhane. He is seen as a supporting character in a couple of tales featuring the anti-villain Nadox of Sarkicism with whom he has a complicated friendship.

Derdekeas was a Faithful-Legate for the Broken Church. One day he was sent for a mission but during his travel, he got lost in a desert. While traveling he saw a person in the distance causing Derdekeas to hope to find a fellow wanderer to accompany him, but became dismayed after finding that the person was a Sarkite. So Derdekeas decided to plan an attack on the Sarkite and kill him for the glory of Mekhane and began stalking him for some time. Eventually, when the Sarkite took notice of Derdekeas, the Mekhanite attacked him and used his sword to cut his spine in half but more flesh and sharp bones came out of the wound which was used by the Sarkite to retaliate against him. The two fought each other for a while with Derdekeas being careful in his attacks and successfully delivering severe damage to the powerful Sarkite which prompted his enemy to retreat beneath the sand. Derdekeas began looking for him, but was ambushed from below by the Sarkite who had grown multiple tendrils and began enveloping the Mekhanite inside a cocoon of flesh. While Derdekeas struggled to fight back, the Sarkite used one of his tendrils to connect to the Mekhanite fleshy brain and learn more about him. After the Sarkite learned of who Derdekeas was and that he didn't want to die like this, he spat the Mekhanite out deciding to temporarily spare him.

However, Derdekeas was determined to kill the Sarkite and in the ensuing days and nights he kept attacking him, but eventually, he became tired and collapsed following a miscalculated attack. He accepted his defeat and decided to leave his enemy to kill him, but the Sarkite decided to spare him again and only stared at Derdekeas, before the Mekhanite became unconscious. After three hours, Derdekeas woke up to find the Sarkite beside him reading some of his scrolls. Using his flesh powers he "spoke" to Derdekeas in his mind, but the Mekhanite tried to fight back. The Sarkite was not startled by this which prompted Derdekeas to ask him who he was to which the Sarkite responded that he was Klavigar Nadox. Nadox then proceeded to go down his own path, but Derdekeas stopped him by asking on what his current objective was to which Nadox replied that he was researching. Derdekeas however, began taunting Nadox by stating that the real reason behind his research was because he was tapping into a divine power above Ion, and that the flesh was in fact controlling them. At that moment Nadox threatened the Mekhanite with a barbed bone at his throat, but this reminded Nadox of how the Daevites had treated him which caused Nadox to immediately leave. Derdekeas decided to still follow Nadox where he found him in a fetal position near a fire and realizing his mistake he apologized to Nadox for antagonizing him. In the following days, the two wandered together aimlessly, while Derdekeas didn't say much apart from affirmations, questions, advice and prayers. After finally arriving at a town, they didn't react much to it and went inside a library for further research. While researching the empty library, Nadox invited Derdekeas to join him in his research to which Derdekeas agreed but with some caution. They began studying their own anatomies and even collaborated to replace the arm of the shepherd boy, who was grateful for their free service.

During their traveling, they kept with their research, but Derdekeas found difficulty in helping since he was unable to read foreign languages, unlike Nadox. Eventually, they came across Fang, a fat man who worshiped the Scarlet King, and he pleaded to them to help him fix his cart. Although Fang intended to kill both them, Derdekeas helped him anyway before he and Nadox left him behind. However, Fang had decided to follow them for some reason, and Derdekeas decided to let him join their group. Eventually, during their travel, they were joined by other wanderers and the group grew more and more eventually becoming a caravan. One night while resting, Nadox became more distant from his companions and when it became obvious Derdekeas approached him and asked if it was his fault that Nadox grew distant from them. Nadox denied that and explained that the reason was that he was contemplating on his purpose and his master, which caused the two companions to be reminded of their opposing origins and so the two grew further apart.

Derdekeas' body like most Mekhanites' was primarily replaced with machinery and clockworks apart from the brain. He possessed telescopic eyes and bronze plates on his skull which caused him to be unable to express any emotion.

Derdekeas just like most Mekhanites, has replaced the majority of his body with metal and machinery as part of the Broken Church's teachings. He had telescopic eyes which allowed him to see through great distances and was very skilled in direct combat. In combat he used a sword which he keeps to himself and is also capable of using fire to attack. He is also shown to possess great intellect as he formed intricate strategies during combat and could perform surgeries on people.

Being raised within the Broken Church, Derdekeas was a devout follower of Mekhane, and like other Mekhanites saw the flesh and the Sarkites as an evil that needed to be destroyed. He hoped that the world would get to know harmony as per Mekhane's vision and wished it to be cleansed from the evil forces plaguing it such as Yaldabaoth and the Scarlet King. He was also an honorable man, considering Nadox as a worthy opponent and admitting his mistakes. He held no ill intent on people whom he view as threats and was shown to be tolerant enough to form some sort of friendship with them. 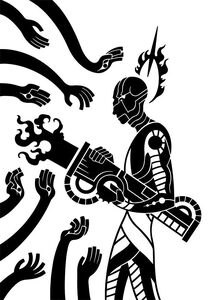 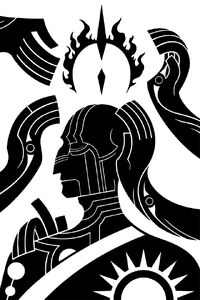 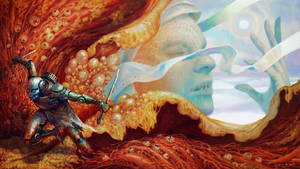 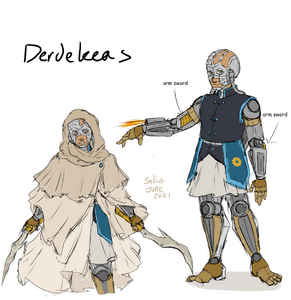 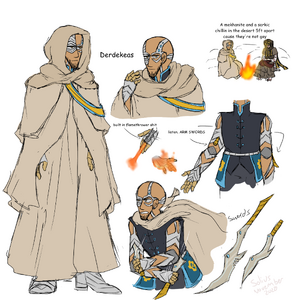