No information
Derek is the Australian DigiDestined encounter by Cody and Joe. He have digimon partner, Crabmon.

He is voiced by Derek Stephen Prince.

Shortly after Hogan, Cody, Joe, and their partners destroy a Control Spire on the coast of Australia, they hear Derek calling from a surfboard for help as he flees with Crabmo from a Gesomon, Shellmon, and Ebidramon. When he makes it to shore, he introduces himself to Joe, Cody, and Hogan. Joe and Cody help deal with the Digimon by having Armadillomon, Ikkakumon, and Crabmon threaten to cook them and turn them into "Digimon Seafood". The threats work and Gesomon, Shellmon and Ebidramon flee. Ikkakumon, Armadillomon and Crabmon chase them towards the Great Barrier Reef, where another Control Spire is located, while Joe, Cody, Derek, and Hogan follow behind them on a small boat.

After the crisis is over and everyone has returned home, Derek celebrates Christmas with Crabmon by eating pizza and giving Crabmon seafood.

As the DigiDestined battle MaloMyotismon, Derek raises his Digivice in Sydney and sends his power to Crabmon. He is then transported to the Digital World. 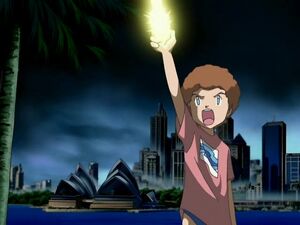 Retrieved from "https://hero.fandom.com/wiki/Derek_(Digimon)?oldid=2149361"
Community content is available under CC-BY-SA unless otherwise noted.