Derek S. Hale is a evolved werewolf and a protagonist that appeared in the MTV's series, Teen Wolf. He was Scott McCall's rival and friend, and taught him how to control the werewolf transformation. Born into the Hale werewolf family, Derek is the son of Talia Hale, the brother to Laura and Cora Hale, and the nephew to Peter Hale. Though he lived his early years in Beacon, he left to New York after indirectly causing his mother's death by dating the hunter, Kate Argent. He returned in 2011 and discovered his sister Laura dead, and investigated the cause of her brutal demise.

He is portrayed by Tyler Hoechlin and played by Ian Nelson as a teenager. Hoechlin also portrays Superman on the Arrowverse.

Derek was born into a family of werewolves. His mother, Talia, was much respected within the werewolf community meaning young Derek came into contact with members of a number of other packs. He and his family lived in Hale House in Beacon Hills, California and he attended Beacon Hills High School. Peter Hale claims a 15-year-old Derek conspired with an Alpha (Ennis) to have Derek's girlfriend (Paige) bitten in hopes of turning her into a werewolf.

Sometime later, Derek entered into a relationship with werewolf hunter Kate Argent. She used him to gather information on his family making him an unwitting accomplice to the arson fire at Hale House that killed most of his family. Derek and Laura left Beacon to New York, staying there for a while until they returned home. Laura was killed by Peter, who did so to gain Alpha powers.

After his Uncle Peter killed the conspirators involved in the fire, Derek killed him and took the status of Alpha Werewolf. Derek then started to create his own pack, recruiting his own beta werewolves - Erica Reyes, Isaac Lahey, Vernon Boyd, and Jackson Whittemore to fight off the Alpha Pack. In order to save the life of his sister Cora, long thought dead in the fire, Derek gave up the spark that made him an Alpha. His eyes turned from red back to blue, as Scott became the true alpha. Thought Derek's anchor was led by anger, he returned and became more compassionate and patient, helping Scott and the McCall Pack.

Derek S. Hale is the middle child of Talia Hale and Mr. Hale outside of Beacon Hills, and is the middle siblings to Laura and Cora Hale. He grew up knowing of his lycan heritage and supernatural threats, and was taught to see his lycanthropy as a gift alongside his sisters and uncle, Peter. Derek would go to Beacon High School, and found great difficulty in controlling his transformations while also playing for the school's basketball team. Peter would teach Derek to use his anger and rage to anchor his humanity, which worked in helping him, but proved to be disastrous for his relationships with people in adulthood. During his youth, Derek would fall in love with Paige Krasikeva, but Peter warned his nephew that his relationship with her would fail if she learned that he was a werewolf.

Peter told Derek that he could prevent this if he turned her via bite, and saw an advantage of this by having the alpha werewolf Ennis bite with Talia's permission. Though Ennis bit Paige, she rejected the bite as was slowly dying in pain, and Derek mercy killed her after she told him he loved her. Upon killing Paige, Derek's eyes turned from gold to blue, signaling that he had taken an innocent life, and that his soul was now darker.

Afterward, Derek began a love affair with Kate Argent, who was secretly a werewolf hunter who started the affair only to learn information about the Hale family. Kate and her conspirators burned down the Hale house, killing Talia and ten people died in the fire, but Peter and Cora survived the incident. Peter's body was covered in burns, causing him to fall into a coma for years until his wounds healed, and Cora left believing that Derek and Laura all died.

Derek felt great remorse for the incident, and was ashamed to tell his living family that he is the reason why the Argents were able to attack them. He left New York with Laura and lived there for six years until 2011, as the siblings heard of weird animal attacks in Beacon. Upon his return, Derek found Cora dead, having been killed by an unnamed werewolf, and dismembered by the Argent hunters to prevent her from reviving.

When Derek founds two teenagers, Scott McCall and Stiles Stilinski in the woods near the ruins of his former home, he wanted to know what they were doing there. After getting no solid answer, he gave Scott his inhaler and later sensed that McCall had been bitten by a werewolf. That Friday night, Derek tricked Scott into coming into the woods by obtaining Allison Argent's jacket to lure him there. When Chris Argent and hunters arrived to kill the two, Derek helped Scott escaped and told McCall that they were now brothers since they shared lycanthropy. Scott accused Derek of being the one who turned him into a werewolf, but Hale didn't correct McCall's accusation at first. 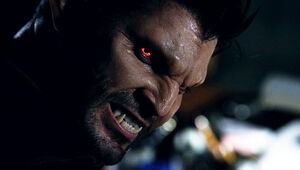 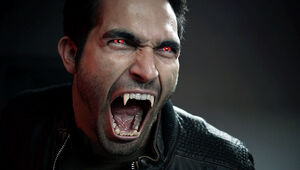 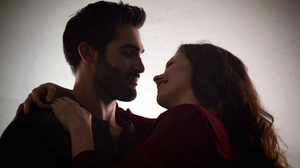 Derek and Jennifer (The Darach).