Heroes Wiki
Register
Don't have an account?
Sign In
Advertisement
in: Spoilers, One Piece Heroes, Female,
and 32 more

Desire is a minor supporting character in the anime and manga series One Piece. She is the former member of the Silver Pirate Alliance, a captain current of the of the Sweet Pirates, and the childhood friend of Bartolomeo.

She was voiced by Yuki Kaida in Japanese and Kira Buckland in English.

Desire is the young size woman with skin, a red hair with yellow shape similar to Bartolomeo, blue eyes and has her pink lipstick. She has a white traditional Japanese sarashi binding with dark blue coat with Japanese street thugs who has a pictures of the ocean on it and her back is pink with the kanji (sweet tooth) and it's on yellow lines. She has pink belt with the letter light purple S at the center, a silver rings in her left side, light blue frilly pants with a traditional Japanese sarashi binding. She has dark red boots with holding her walking silver stick. She also wears a dark red gloves.

Desire is a very cold and obsessed woman who is attempting to her personality maintain, focused strict in the business. Later, Desire became can be flustering while the people managing to help her.

Despite her grandma's believes that it's seen preciously knowledge, just like Bartolomeo.

She had a dream who top on the reach into her friends, and she was loyal to passionate her crew. She gets outgoing if she will supporting her friends betraying her crew or changing the goals.

Desire is a notable boat racer of the East Blue, and was competent rider, to been great chasing and executed illegal mischievous to success at the mission.

Desire carries her pipe a wields. As a walker stick, she able to break Bartolomeo's pickax. She able also to deflected to the bombs Aveyron to throw of her expert precision. 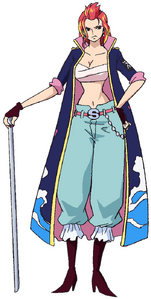 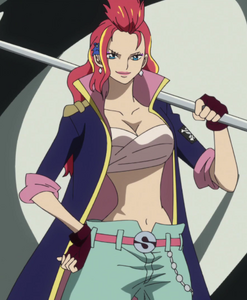 Back of Desire's coat.