Heroes Wiki
Register
Don't have an account?
Sign In
Advertisement
in: Articles under construction, Infobox Update, Male,
and 31 more

All of Pikachu's powers

Detective Pikachu is the titular deuteragonist of the 2019 movie with the same name.

In the movie, he is voiced by Ryan Reynolds who is better known for portraying Deadpool from the X-Men and Deadpool franchise, while his Pokémon Speaking voice is provided by Ikue Otani who also voices Pikachu from Pokémon series.

In the beginning, Pikachu can be glimpsed running to his owner's car before Mewtwo breaks out of his containment unit and follows the car where it was sent falling over the bridge.

While Tim was looking through his seemingly deceased father's apartment and mistakenly opens a vial of R, forcing him to open the window and air it out to avoid choking to death. He catches a glimpse of Pikachu and armed himself with a stapler to defend himself.

When he hears it talk, he drops the stapler in shock and starts begging Pikachu to stop when a group of Aipom attack them as a result of the R infecting them, leading them to run up to the roof and escape down a garbage chute to escape the Aipom.

After the Aipom return to normal, as they walk down the market, it is discovered only Tim can understand what Pikachu was saying and that he was searching for his owner and Tim's father Harry.

At the Hi-Hat Café, Tim and Pikachu discuss the disappearance and supposed death of Harry Goodman who may be the key to the latter's past and maybe alive. After an argument outside the café, they decide to rest at the apartment where they see how much of a Pokémon fan Harry was.

In the morning, Pikachu was looking through newspapers when Tim disrupts his progress. Pikachu shows the capsule of R that infected the Aipom and that someone had Harry silenced to prevent interference in their plan.

When they visit the TV station, they witness Roger and Howard Clifford get into an argument about Pokémon and the former tell Lucy that the news company will not accept stories based on rumors, gossips, and hearsay as she has to find a verifiable source for the story.

When Tim asks her about something, she takes him and Pikachu to her office to discuss the R chemical. After Pikachu calmed the Psyduck there down, Lucy tells Tim that she got her samples from the docks after following an informant of Harry there.

After Tim and Pikachu leave, they come across a Mr. Mime that seemed to recognize Pikachu and was the informant. After incapacitating it, they proceed to try and interrogate the Psychic Pokémon, finally culminating in Tim pretending to poor gas over it and threaten to "light" it on fire if it did not explain where the R came from.

This leads to the main duo heading to an illegal cock fight where Pikachu ends up fighting a Charizard in an attempt to get information on Harry. After Sebastian, the owner of the fighting ring accidently breaks the vials he had and spreads R gas across the area making most of the Pokémon go berserk, Tim interrogates Sebastian who explains that he got the R from someone called "The Doctor" before escaping.

After a Magikarp evolves into a Gyarados and washes Tim and Pikachu out of the building, Tim and Pikachu were caught by the cops and taken to their commissioner who is disappointed in Tim's lack of patience and shows him a video of Harry Goodman's crash, believing him to be dead even though Pikachu is still alive.

After Tim realizes he was not very nice to his dad, he is summoned to Howard Clifford's office where he shows a holographic video of the crash where Mewtwo takes the wounded body of Howard and did something to Pikachu before it's terminated with Howard telling Tim to find Mewtwo if he wants to find his father, the only person who Howard seemingly trusts.

They meet Lucy Stevens at the Hi-Hat café where they learn from her that she found out a disaster at PCL sometime ago. On the way there, they find out that Dr. Ann Laurent was recruited as its chief scientist for a project involving Mewtwo after her attempts at mind control revoked her grant.

Upon coming across a fence blocking access to the condemned PCL building, Lucy cuts the fence so they can investigate the building on what happened there. When they investigate, they come across some altered Greninja and Torterra modified to grow bigger.

Tim and Pikachu come across the ruins of the lab Mewtwo was held in where they come across the station of Dr. Laurent and upon checking it, they trigger a holographic video of the events where the mad doctor extracted Mewtwo's DNA for Serum R. Later as she determined the Neuralink to be operational, the loss of power resulted in Mewtwo breaking out of containment and seemingly killing her.

They rewind to the beginning where Anne completed the containment unit and note how Harry was hired to catch Mewtwo. The main duo try to regroup with Lucy, they find that the Greninja caught her, forcing them to trigger the fire alarm and sprinklers so they can escape by breaking into the display of the Torterra and rush through the woods to escape the Greninja, culminating in Pikachu being forced to insult Psyduck so its psionic waves can incapacitate the Greninja.

However, the ground begins to warp forcing them to retreat. Eventually, they they discover they were on gigantic Torterras before Pikachu was struck by a falling rock and injured by it.

After Pikachu was healed by Mewtwo, the latter uses his powers to re-inact Pikachu's memory of shutting off power to its containment tube before someone who appears to be Roger Clifford has Mewtwo captured.

Feeling like he betrayed Harry's father and could betray Tim, he ends his partnership and falls into a despondent state. After singing the Gotta Catch'em All music from the first season of the anime in its state of mind, Pikachu stumbles across the bridge the car accident happened earlier at.

Upon finding a Greninja star, it realized they were sent to cause the crash and, after thinking back to the holograms, realize Howard was behind it. It soon arrives in Rhyme City to find that Howard, who fused his mind into Mewtwo's body and fused the population with Pokémon with Lucy, fused with Psyduck, walking up to him to explain what happened.

After hearing Lucy's explanation, Pikachu gets its powers active again to fight the Howard-possessed Mewtwo which proves to be a largely one-sided endeavor. When Pikachu gets knocked out and a Ditto, which impersonated Roger Clifford, comes close to making Tim fall to his death, Tim calls out Pikachu's name to reawaken it before Roger knocks the Ditto away.

Pikachu proceeds to Volt Tackle Mewtwo to incapacitate it so Tim can disconnect the Neuralink from Howard's body. When Pikachu ends up falling as a result of a Howard-possessed Mewtwo dropping it, Mewtwo, who was freed, proceeds to undo all the damage caused by the Pokémon rampage and reveals that it saved Harry Goodman from death by fusing him into his Pikachu resulting in the personality it displayed throughout the film.

With Tim and Pikachu in its presence, Mewtwo proceeds to separate Harry from Pikachu to restore him to healthy human form, but reverting the Pikachu's personality to what it previously was.

After Tim decides to give detective work a try, Pikachu demonstrate excitement at the thought as the Goodmans head for coffee. 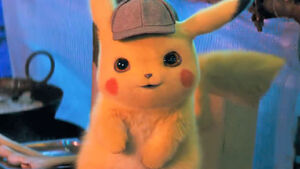 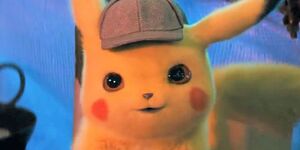 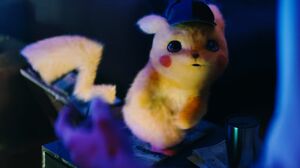 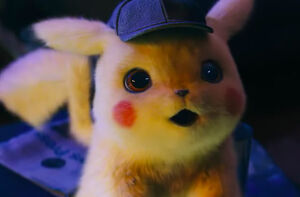 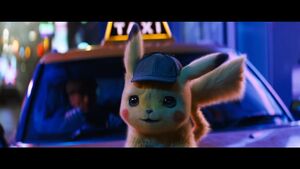 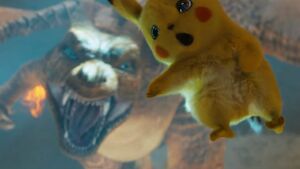 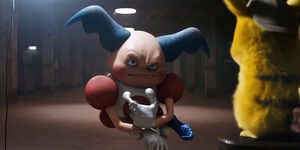 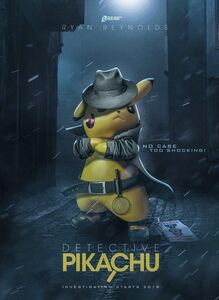