Writer and host of Dewey Dew-Night!

Hanging out with every one

Dewford Dingus "Dewey" Duck is one of the three deuteragonists of the 2017 DuckTales series.

He was voiced by Ben Schwartz, who also voices Randy Cunningham from Randy Cunningham: 9th Grade Ninja, Leonardo in the 2018 reboot of Rise of the Teenage Mutant Ninja Turtles, and Stuffy the Dragon in the Doc McStuffins spin-off TV series The Doc Files. He was also a vocal consultant for BB-8 in Star Wars: The Force Awakens. He also played Rilo in the Tron: Uprising episode "The Renegade: Part 1".

Dewey is wearing a blue long-sleeved T-shirt with a light blue shirt over it.

The second brother hatched and dealing with classic middle-child syndrome, Dewey is always looking for ways to stand out from the crowd. Dubbed "The Guts," Dewey is quick to throw himself into dangerous situations impulsively, just to prove himself. Deep down, he's worried that he's just an ordinary duck, so he's constantly itching to make a name for himself. Dewey is the daring, rebellious, and adventurous attention seeker of the trio, who loves to explore and do bold and exciting things to stand out and get noticed. Dewey can be impulsive; he can't sit still too long before jumping into action. Dewey desires to stand out as his own individual among his brothers, by trying to impress all those around him by doing big extraordinary things.

Dewey has shown to be compassionate, which shows when he stands up for Webby when everyone was hesitant in 'Daytrip of Doom' and offers to save Mark Beaks even after learning he was a fraud. Dewey can be sensitive; he is easily insulted as seen in "The Infernal Internship of Mark Beak" when Huey admits to thinking that Dewey as irresponsible and not serious enough to be successful. This shows that Dewey is also a bit insecure. Dewey is also very emotionally attached to his mission to learn about his long lost mother to the point that he wants to know more about her, but is afraid of what the answers may be, as shown in The Spear of Selene!

With his ambitious and quick-thinking personality, Dewey is eager to prove himself. And sees himself becoming a successor to his Great Uncle Scrooge, he is eager to show his skills in their adventures.

In "The Secret(s) of Castle McDuck!", Dewey is afraid that his brothers will be hurt about their mother, but Huey tells him he wanted to keep it for himself to feel special, which Dewey makes a facial expression of his own ego. Dewey realize he has been selfish for doing this.

Dewey is also shown to have many characteristics of his mother, which is noticed by Scrooge, He possesses his mother's love for adventure, her bravery, recklessness and stubbornness, which is noticeably seen in the episode 'The Last Crash of the Sunchaser', when he carelessly chases after a piece from a photo of his mother and risks his life by climbing on top of the already unstable airplane whilst the rest of his family, via walkie talkie, desperately try to convince him to come down. Dewey responds to this with an expression of anger and annoyance, throwing the walkie talkie into the clouds below and continues his reckless act.

Dewey is arguably the most rebellious of the three, as he always seems to be causing chaos in one way or another, even going as far as to join a pirate crew to get back at his family for not listening to his stories.

While all the triplets possess some form of selfishness, Dewey is the most self-centered, being the singer to his own theme song and playing by no one's rules but his own.

Huey is Dewey's older brother (by 3 seconds) and Louie is his younger bother. Dewey is very close with his brothers. They're all very mischievous and get into a lot of trouble together, yet Dewey and Louie cause the most trouble. Even though they're brothers, they have a strong sibling bond with each other. They usually get along, but sometimes they can disagree and get into fights or competitions.

Donald is Dewey's uncle and guardian, although Dewey views him as boring he still loves his uncle though Dewey and brothers tend to go behind his back. Yet despite Dewey's rebellious nature Donald continues to love him unconditionally and do whatever he can to protect them. Which is shown in Woo-oo! where Donald jumps into danger to prevent Dewey from becoming burned.

Scrooge McDuck is Dewey great-uncle. Dewey looks up to Scrooge, viewing him as the most exciting duck in the world. He never knew he was his great uncle before the events of Woo-oo!, and within learning they were related, Dewey was ecstatic and wished to impress him.

Della is Dewey's biological mother. He was investigating her disappearance when he first sees her portrait. Since he didn't know much about her growing up, it made him obsessed with knowing the mystery of her disappearance. Della's childish recklessness action has affected Dewey by making him feel abandoned, which is at least partially what caused Dewey‘s attention-seeking behavior through several adventures. When discovering more about his mother's amazing adventurous talents, it caused him to behave similarly to his mom, leading to dangerous repercussions. His obsession with learning what happened to Della lead him to seek it out even when it put him in danger, like in "The Last Crash of The Sunchaser!". Dewey met Della's younger self during the past year of Christmas prior to the series, realizing that Della just wishes to spend Christmas with her brother. Although he tried to keep it a secret, Della and Donald knew he was from the future. When Dewey finally meets his mother in person in the present day in "Nothing can stop Della Duck!", he first mistakes her for a cyborg due to her metal artificial leg. Dewey, having waited for this moment his whole life, rushed to hug his mother without hesitation. Dewey expresses surprise when his mother's original name for him was Turbo, and is the first to embrace her when he finally meets Della for the first time. They later go on an adventure in the arctic together in "Raiders of The Doomsday Vault!" for the search of the money tree seeds within the Doomsday Vault. Della's constant perseverance into serious danger, however, leads Dewey to realize the real trouble he's putting himself in, and eventually breaks down. But luckily, Della helps both of them escape the vault before any more danger could come their way. By the events of "The Lost Cargo of Kit Cloudkicker", Della had been teaching her son on how to fly a plane.

Webby is one of Dewey best friends. They are also kindred spirits thanks to their shared love and enthusiasm for adventure and mystery. They love hanging out and work great together, they have a very strong friendship and it shows. As well as being fun loving, they are very reliable, trusting and compassionate towards one another, always being there for each other when time are tough and thrilling. This is shown in "Daytrip of Doom!" when everyone was hesitant to bring Webby to Funzo's Fun-zone knowing she was going to be a handful, but Dewey wants to give her a chance and help her out. And in "The Great Dime Chase!" when Dewey wishes to know about his mother, he turns to Webby for help. And through out all the trails they discover a secret room dedicated to Della, Dewey trusts Webby to keep this as their secret until they know what it means. With all the trust and kindness Dewey gives Webby in their friendship, she does the same in "The Spear of Selene!" when Dewey wishes to quit their conspiracy hunt on Della Duck. Webby doesn't want to end her investigation and they fight about it, but once she found out that Dewey is scared to know his mother's true nature, she show her sympathy by stepping aside in support for her friend's emotional strife. Yet, for Dewey, this motivates him to keep going. Dewey thanks Webby by showing that he is grateful to have her around.

Out of the triplets, Dewey is the closest to Launchpad - in fact, Launchpad considers Dewey his best friend, and occasionally refers to Huey and Louie as "Dewey's brothers". In "Terror of The Terra-firmians!" Launchpad is worried that Dewey might be possessed by a mole-monster. In "Beware The B.U.D.D.Y. System!", the two of them hang out together. Launchpad introduces Dewey to his favorite TV show, Darkwing Duck. Launchpad also asks for fashion advice from Dewey. In "Jaw$!", when Dewey gets eaten by Tiffany, Launchpad wakes up in the middle of the night because he senses his best friend is in danger and takes Donald's houseboat to the Money Bin to rescue Dewey.

After seeing a scary movie, Huey, Webby, and Lena explore an abandoned subway line in search of legendary creatures and end up trapped there with the others (Mrs. Beakley, Louie, Dewey and Launchpad). As they struggle to escape. 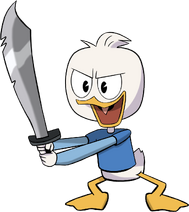 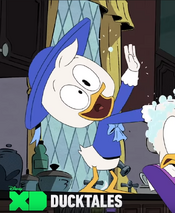