Inventing things in his laboratory, Studying

To be the smartest kid in the world and to be more successful than Mandark, his archnemesis

Dexter is a boy genius who has a secret laboratory and is the titular main protagonist of Dexter's Laboratory, an animated series that aired on Cartoon Network from 1996-2003. He is voiced by the late Christine Cavanaugh, who also voiced Gosalyn Mallard, Oblina & Chuckie Finster and was also voiced by Candi Milo, who also voiced Nick Dean, Coco, Madame Foster, Ms. Nora Wakeman, Irma Lair, The Flea, Pulgita and Snap.

Dexter was born as a true genius. He grew up to a normal family and at very young age created his very own laboratory in which he kept hidden from his parents behind a secret bookcase. The only person who knows that he has a lab is Dee Dee. His parents at one point found out that Dexter has a lab, but that was during the attack of a giant monster, Dexter had to reveal it to them so that they can join him to stop the monster. After defeating the monster, Dexter erased their memories so that they will not remember. Dexter attends school and is at the top of his class with his studies and tests which makes some of the other students jealous.

Dexter was first born in a hospital in Genius Grove. His Dad was so happy to have him until he found out that he had a very large head. He was terrified and hoping that there was nothing wrong with him. The doctors studied this and they found out that the reason for this was because he was a genius. His Mom and Dad were very happy to hear this and were very proud of him. The doctor gave him glasses in honor of his genius. With this proud declaration, his parents happily took him home to introduce him to his sister Dee Dee, who quickly began unintentionally tormenting the newborn Dexter.

As soon as Dexter could crawl, he immediately began to develop at a fast pace, building his first invention and studying technology, but Dee Dee kept on wrecking his inventions. This carried on until Dexter was 7 years old. Then, he found a secret place in his house that was empty and undiscovered.

He decided to make this his secret laboratory and he would use it as a way to stay away from Dee Dee. One day, Dee Dee was playing in Dexter's Room while he was in his lab and then she saw the bookshelf that led to his lab. She then pulled the book out from the bookshelf and discovered Dexter's Lab for the first time. Ever since then, Dee Dee has been annoying Dexter and wrecking his lab.

When Dexter started going to school at Huber Elementary School, he was recognized as the smartest kid there and the favorite of all his teachers. All of the teachers loved him and treated him like a friend. The other kids were even jealous of him for being so smart. This was until a new kid came along when Dexter went back to school for the new school year after summer break. The new kid was a young mysterious boy named Mandark who quickly became Dexter's rival. Upon their first meeting, Mandark proved that he was far smarter than Dexter and even won over the affections of Dexter's beloved teachers. To try and prove that he was still superior, Dexter showed Mandark his laboratory thinking it would mean that he's smarter than him, but then Mandark revealed that he had an even bigger and better laboratory. Mandark then forced Dexter to shut down his lab, or else become Mandark's lackey. Dexter thought that it was all over for him until Mandark fell in love with his sister Dee Dee. Realizing he could take advantage of this, Dexter told Mandark how to "invite" Dee Dee to his house by luring her with candy and entertaining her with "dancing", knowing full well that Dee Dee would go on a destructive ballet rampage if she was asked to dance. After she arrived to Mandark's laboratory, Mandark quickly asked his beloved to dance, and as Dexter had anticipated, Dee Dee went on a dancing rampage and destroyed Mandark's laboratory. Dexter watched all this occur from his spy cams and he happily made a toast to his beloved and reactivated Computer who was happy to be back. After this event, Dexter had officially become the superior boy genius and Mandark became his eternally one-step-behind rival. This would be the beginning of Dexter's peculiar day-to-day life filled with wacky misadventures and many difficult challenges while trying to endure Dee Dee's antics and maintaining the secrecy of his lab.

A short time after his first encounter with Mandark, Dexter was at school when he announced that he would be taking part in the town science fair and the class praised Dexter's genius as he gloated about his superiority and his goal to win the science fair. An angry Mandark sitting in the back of the class was unable to hold back his frustration and called out everyone on their fanaticism towards Dexter and even told Mr. Luzinsky to hold his tongue, as he believed that Dexter was unworthy of any praise after he had destroyed his lab and used his feelings for his sister against him. Mandark then revealed that he planned to take part in the town science fair as well where he would defeat Dexter, however Dexter remained unfazed by his threats and ignored him even when Dee Dee tried telling him to be more cautious.

The next day during the fair, Dexter was about to win with his robotic arm until Mandark arrived dressed as a sorcerer and carrying a mysterious golden box. Mandark's late entry was accepted into the fair despite Dexter's protests and Mandark then used his dark brand of arcane magic to summon his inter-dimensional monster JoJo which then kidnapped Dee Dee, forcing Mandark and Dexter to put aside their differences and join forces to save her. After doing so, Dee Dee rewarded Dexter with a peck on the cheek and an amorous Mandark with a disturbed look and the two boys appeared to have settled their differences, at least until the two were given the blue ribbon prize. Their unwillingness to share the prize ended up re-igniting their rivalry once more.

One day at school while watching a documentary on Mount Rushmore, Dexter discussed the possibility of bringing to life the presidential sculptures (after the subject was brought up by Timothy) with the technology of Tripolar Frankensteinian Electrodes which could then be used to cause havoc and destruction, and this thorough explanation did not go unnoticed by Mandark, who grew a keen interest in Dexter's explanation, writing down everything as he spoke.

The next day as Dexter is planting a cherry tree, it is suddenly cut in half by a giant stone axe wielded by the now living full bodied statue of George Washington who is being controlled by Mandark. Mandark then has George smash Dexter's home and lab, forcing Dexter to briefly retreat. Dexter is then given a penny by Dee Dee which inspires him to travel to Mount Rushmore and bring to life his own sculpture.

Meanwhile Mandark, assuming himself to be victorious, proceeds to lounge in Dexter's pool with Washington when they are suddenly confronted by Dexter and his now animate statue of Abraham Lincoln. The boys and their statues then engage each other in an epic battle. Eventually the two statues prove to be evenly matched, and it appears the statues somehow gained self-awareness, commenting on their equal might and complimenting each other. The two eventually end the battle and leave behind Dexter and Mandark, much to their frustration, and the two statues decide to go eat some bricks.

Mandark little sister, named Olga Astronomonov, who goes by the name of "Lalavava", got into a rivalry with Dee Dee the same way Dexter did with Mandark after the two girls competed to get the solo role in the dance recital. After the solo was changed into a duet, the two girls sought out the aid of their brothers so they could build a device that would allow them to beat the other. However while Dexter was asked nicely by Dee Dee, Mandark was tormented and threatened by his sister. On the night of the recital, Dee Dee used the Dexo-Transformer while Lalavava used the Mandark-Transformer and each formed a deadly and destructive dance that destroyed the dance theater. Both then agreed that their brothers were stupid and that science stinks, and the two happily became friends and went to the mall.

Dexter is normally in conflict with his ditzy older sister Dee Dee. Dexter, though highly intelligent, often fails at what he has set out to do when he becomes overexcited and makes careless choices. He manages to keep the lab a secret from his clueless, cheerful parents, who amusingly never notice any evidence of the laboratory, even when it was right before their eyes. Despite coming from a typical all-American family, Dexter speaks with a Russian-sounding accent, a reference to Tartakovsky's own accent that he spoke with during childhood. Dexter's favorite superhero is Major Glory.

Dexter is a very short young boy who has curly red hair that was passed down to him from his mother He wears a pair of glasses that appear semi-circular at normal times, but when he widens his eyes, the tops of them round out. He wears a little white lab coat with black buttons on it. He also wears purple gloves, and a pair of black rubber zipper boots. Occasionally he may or may not wear a pair of black pants that match his boots. He speaks with a Russian accent despite the rest of his family not having any accents.

She always mysteriously gains access to his lab no matter what he does to try to keep her out. Dee Dee eludes all manner of security and, once inside, delights in playing in the lab, often destroying all of his creations and often by pushing the wrong buttons on an invention (it is even hinted in one episode segment, "LABretto", that she does this on purpose). This is often preceded by Dee Dee asking "Oooooh, what does this button do?", without waiting for an answer. Despite her hyperactive personality, Dee Dee sometimes makes more logical decisions than Dexter, or even gives him helpful advice. Despite being constantly annoyed with DeeDee's interference and stupidity, Dexter still loves her and cares about her well being. 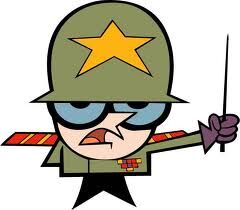 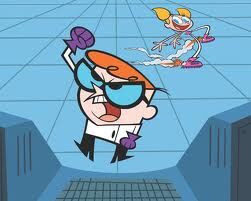 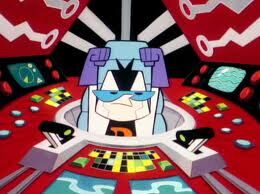 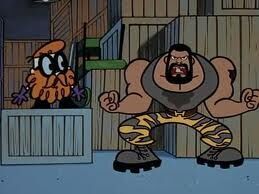 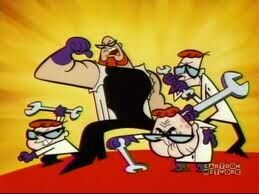 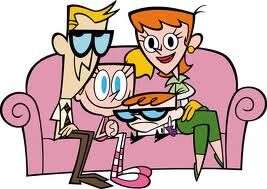 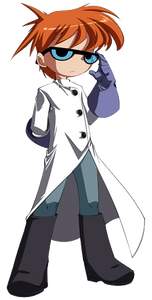 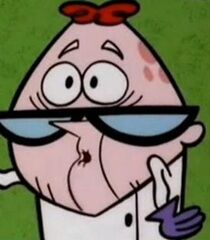 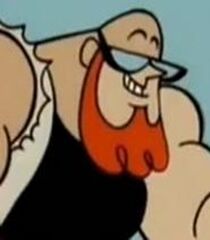 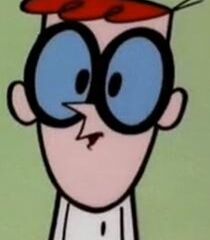 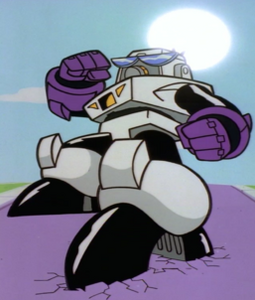 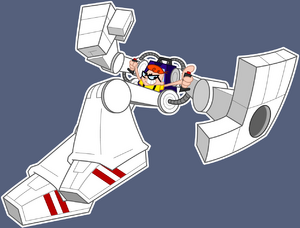 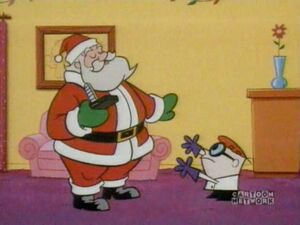 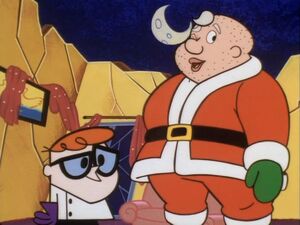 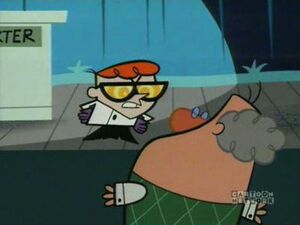 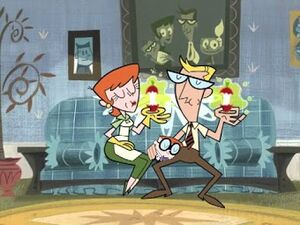 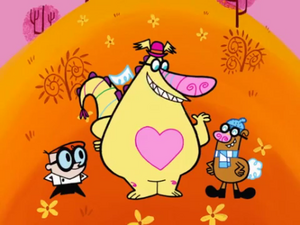 Dexter is happy about koosy.png
Dexter and mom seeing about them.png
Add a photo to this gallery