Kill people who deserve it.

Titular Vigilante
On & Off Anti-Hero

Dexter Morgan is the anti-heroic protagonist who appeared in Jeff Lindsay's Dexter novel series, as well as the television series of the same name and it's revival, Dexter: New Blood. He is a serial killer who murders people who are themselves murderers, according to a "code" taught to him by his adoptive father, a homicide detective.

He was portrayed by Michael C. Hall, Devon Graye as a teenager, Dominic Janes and Nicholas Vigneau as young children, and Maxwell Huckabee as an infant.

Orphaned at the age of three when his mother was murdered right in front of him, Dexter was adopted by a Miami policeman, Harry Morgan, who recognized his homicidal tendencies and taught him to channel his gruesome passion for human dissection in a "constructive" way — by killing only heinous criminals (such as child molesters, mob assassins, and serial killers of the innocent) who have slipped through the justice system.

To satisfy his interest in blood and to facilitate his own crimes, Dexter works as a blood spatter analyst for the Miami Metro Police Department (based on the real life Miami-Dade Police Department). Although his drive to kill is unflinching, he is able to emulate normal emotions and keep up his appearance as a socially-responsible human being.

Dexter Moser was born on February 1, 1971 to Joseph Driscoll and Laura Moser, and was born three years after his brother Brian. Dexter lived with his family in Miami, Florida, and have a peaceful life with his brother, but their mother was a drug addict. Later on, Laura acted as Detective Harry Morgan's informant in Hector Estrada's cartel, and provided intel to bring him down.

In 1973, Dexter, his mother, brother and three drug users were taken into a shipping container by Estrada and his two henchman, and killed Laura in front of both Dexter and Brian. The siblings were left in the container for two days, and were eventually found by Detective Morgan. Morgan left Brian to the foster care system, seeing that he was irreparably traumatized, and decided to adopt Dexter, reasoning that he had a better chance of living a normal life.

When Dexter was an adolescent, Harry discovered that he was killing neighborhood pets. Seeing that Dexter had an unstoppable need to kill, Harry taught him how to be a careful, efficient killer of people who "deserved" it - murderers who had escaped punishment. During his youth, Harry taught him to stalk and hunt, police techniques, and how to blend in with "normal" people. The "Code of Harry", as Dexter would come to call it, had three basic rules: appear normal to others; be sure the victim is guilty of murder; and, above all else, don't get caught.

Dexter attended Alan B. Shepard High and graduated, and went to college, where he was top of his class in medical school. At Alan B. Shephard High, Dexter wasn't noticed by many people and stated that he didn't have any friends, but noted that a girl named Janet was always nice to him. During his time in college, Dexter studied advanced jujitsu during college, and later gave medical school to become a forensics expert.

When Dexter was 20, Harry was hospitalized with coronary artery disease. Harry then gave Dexter permission to kill his nurse, who was killing her patients by overdosing them with morphine. Dexter would start killing people, and his fourth victim was Juan Ryness, a pimp who murdered a girl and was left off due to a faulty warrant. Harry became enraged by this, and later discovered Dexter dismembering Ryness, and immediately vomited. Three days later, Harry committed suicide, unable to live with what he had turned Dexter into.

Dexter becomes a blood spatter analyst for the Miami Metro Police Department, where everyone sees him as a harmless "lab geek" except for Sergeant James Doakes, who senses who Dexter truly is, and despises him. Dexter works alongside his adoptive sister Debra, Harry's biological daughter, a detective in the Homicide Department who has no idea that her brother is a serial killer. He considers his relationship with his girlfriend (and later wife) Rita Bennett part of his "disguise" as a regular person, although he is genuinely fond of her and her children, Astor and Cody.

Ten years have past since the events of the original series, and Dexter has managed to control his homicidal urges while under the guidance of his internalized late adoptive sister, Deb. By the beginning of the series, Dexter is working as a salesman, is in a relationship with officer Angela Bishop, and hasn't murder anyone in over a decade. However, his urges return under numerous circumstances that relate to the return of his son. 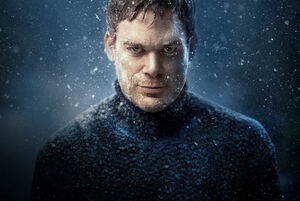